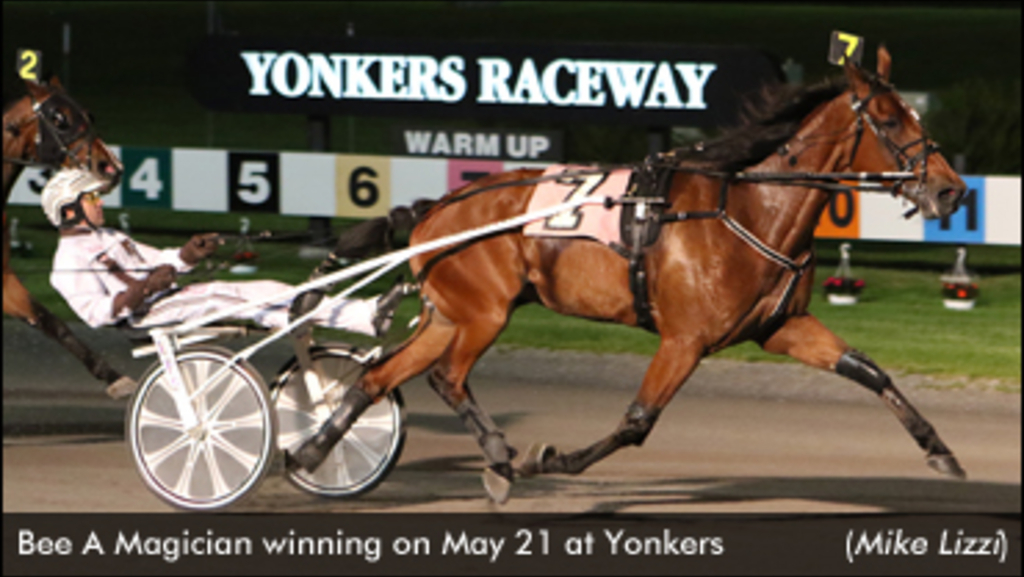 Yonkers Raceway’s Saturday night $45,000 co-featured Open Handicaps were brought to us by the letter 'B,' while Missile J won the lone Art Rooney elimination.

Ladies first, with Bee A Magician (Brian Sears, $3.50), who took an overnight rest stop and toyed with her six marquee trot rivals.

Major Athens (Tyler Buter) pulled pocket early against 'the Queen,' and all that did was cost him second. That went to Allerage Star (Dan Dube), with Major Athens, Luminosity (George Brennan) and Crazy About Pat (Jordan Stratton) grabbing the minor awards. Buen Camino (Jason Bartlett) was outrun in a mile that ended up being a track record for aged mares.

For $3.9 million ma’am Bee A Magician, a six-year-old daughter of Kadabra trained by Nifty Norman for co-owners Mel Hartman, Herb Liverman and David McDuffee, the win was his third in as many seasonal starts (lifetime 44-for-68). The exacta paid $19.80, with the triple returning $64.50.

Then, there was Bit Of A Legend N (Stratton, $3.50), who prevailed from an impossible locale in the weekly pacing feature. Last among the seven in a pokey race, he saw Great Vintage (Mark MacDonald) seemingly dawdle (:27, :56.2, 1:24.4) with Outrageous Art (Bartlett) engaging first-up.

Great Vintage owned a length lead into the lane, then began to get steppy and tire. In the interim, Bit Of A Legend N was winding up from last and rallying down the middle of the oval. Sixth turning for home, he was a going-away winner, defeating Outrageous Art by a length and a quarter in 1:52.1.

For Levy champ Bit Of A Legend N, a seven-year-old Down Under son of Bettors Delight owned by Harry von Knoblauch and trained by Peter Tritton, he’s now nine-for-12 this season. The exacta paid $26.80, with the triple returning $84.

Saturday’s card also included a $40,000 elimination for the Art Rooney Pace for three-year-olds. Missile J (Sears, $2.10, part of entry) won the game of musical chairs -- nine to eliminate one -- in 1:53.2. The American Ideal gelding defeated Rodeo Rock (Dube) by a length and three-quarters, with the winner’s entrymate, Artmagic (Brennan) third.

Joining those three in next week’s $300,000 final of the 26th Rooney are Manny, Yankee Artillery, No Shame Blue Chip, Tailgunner Hanover and Tap Into Power.

Autotune Hanover, last season’s winner of the Lawrence B. Sheppard Pace at Yonkers, was devoid of pace this night and finished ninth.