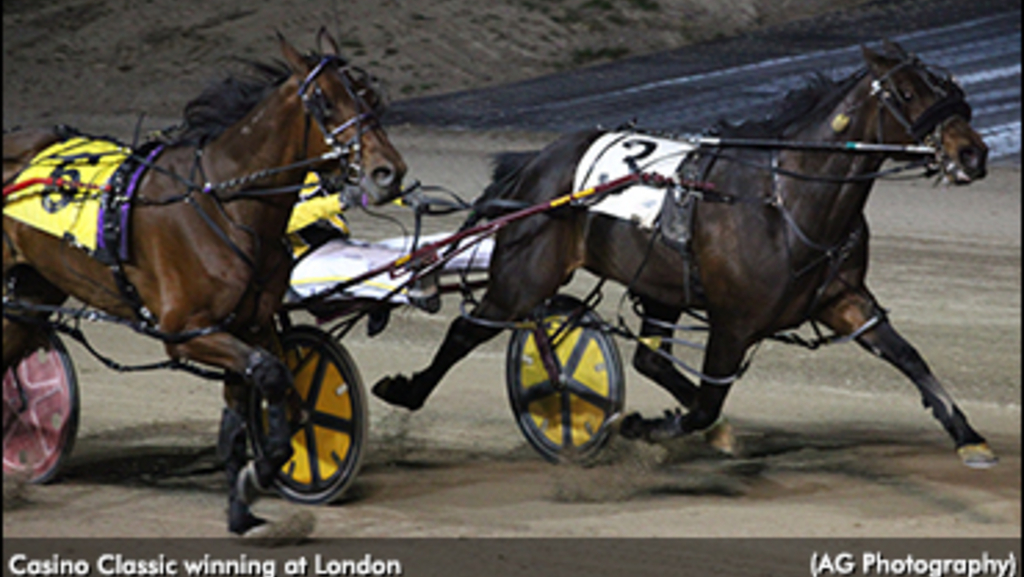 Driver Ryan Holliday completed a sweep of the Tuesday (May 21) features at The Raceway at Western Fair District when Casino Classic turned away a late-mile bid from odds-on favourite Buttermilk Hanover to win the $11,600 Fillies and Mares Preferred 2 Pace in 1:56.

The five-year-old Classic Card Shark mare cleared command from Phoos Girl moving to a :28.4 opening quarter and creeping to a :59.1 half. Buttermilk Hanover, sitting sixth, pulled first over as the race slowed and advanced to within a length of the leader passing a 1:28 third quarter. Buttermilk Hanover continued to draw closer to the lead rounding the final turn and matched strides with the leader turning for the finish before dropping back a half length and settling for second. Phoos Girl finished third.

Co-owned by trainer Richard Manders with Keith Manders, Casino Classic won her fourth race from nine starts this season and her 20th from 72 overall, earning $149,542. She paid $9.20 to win.

Holliday also wired his competition in the $12,700 Preferred 2 Trot, winning with Willyorwonthe in 1:59.1. The six-year-old Angus Hall gelding cleared control from post 5 and led unchallenged through a :28 first quarter and :59.2 half. Fox Valley Veto, sitting fifth, tipped off the pylons passing the half and pulled into second approaching a 1:29.3 third quarter. He stalled circling the final turn and only gave chase through the stretch as Willyorwonthe hit the finish two-and-a-quarter lengths in front. Pocket-sitter Sicario took third.

Earlier on the card Top Royal brushed first over to post a half-length win in the $9,400 Fillies and Mares Preferred 3 Pace, stopping the clock in 1:55.

Driver J Harris positioned the Randy Henry trainee fourth as Regal Luck led the field past a :27.2 opening quarter. Harris soon tipped Top Royal first over and began to advance heading towards a :56.4 half. She stuck a neck in front of the pacesetter past a 1:25 third quarter and held off Regal Luck through the stretch to win. Style Snapshot, inheriting the pocket around the final turn, took third.

Winning her fourth race from 13 starts this season and her 23rd from 108 overall, Top Royal has earned $187,512. The six-year-old Royal Mattjesty mare competes for owner Brydown Farms Inc and paid $12.20 to win.

Nebraska Jack jetted to the top from post six and turned away a late charge from pocket-sitter All Out Henry to take the $9,400 Preferred 3 Trot in 1:59.4.

Uncontested through a :29 first quarter and a 1:00.2 half, Nebraska Jack faced dull first-over pressure from Lets Leavem moving to a 1:29.3 third quarter. The only challenge came late in the stretch when favourite All Out Henry angled from the pocket and after the leader, but hit the wire three-quarter lengths from victory. Euro Classic, stalking the top two, finished third.

A six-year-old gelding by Cantab Hall, Nebraska Jack won his fourth race from 16 starts this season and his 17th from 107 overall, earning $158,801. Stephen Bossence trains the $11.60 winner for owner Stable Twenty Three Inc. and Tyler Borth sat in the sulky.