Half A Billion, HP Sissy Repeat At 3R

Both Half A Billion and HP Sissy established themselves as “horses to beat” with repeat victories in the second round of the Québec-bred series for four- and five-year-old pacers on Sunday (May 21) at Hippodrome 3R.

Half A Billion was the fastest of the two series winners, as trainer-driver Francis Picard worked out strong cover for his horse against an entry comprised of two full brothers, Mach On The Beach (Pascal Berube) and Mr Match On Beach (Stephane Brosseau). Mach On The Beach and Berube had cut the mile with Mr Match On The Beach sitting the pocket trip as HP Patriote and driver Guy Gagnon tried in vain to get to the front, giving Half A Billion live cover until the backstretch.

It was then that Picard sent Half A Billion around HP Patriote and went after the race leaders, collaring Mach On The Beach around the final turn and then going on to win by 2 1/2 lengths in 1:57, the fastest mile on the afternoon card. Mr Match On Beach was second with Mach On The Beach third.

For Half A Billion, it was his second straight win and fourth triumph on the year. Owned by Michel and Francois Letarte, Jean Allaire and Corey Giles, the five-year-old gelded son of Sportswriter paid $4.00 to win as the even-money favourite. 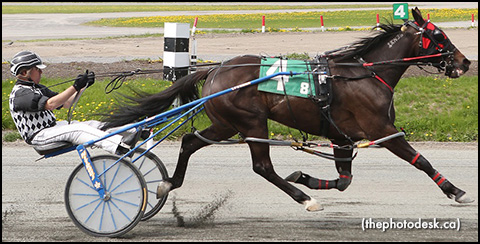 HP Sissy soundly defeated nine rivals in the distaff division of the series.

With Guy Gagnon in the sulky, HP Sissy left from post three in the sixth race co-feature, was able to outkick Skyfall Sena (Jocelyn Gendron) to the opening quarter mile, and never looked back. Holding the field at bay the rest of the one-mile race, Gagnon and HP Sissy pulled away from the field around the final turn, winning with ease by 5 1/4 lengths in 1:57.2.

It was the second straight win and third triumph of the season for HP Sissy. The four-year-old Up The Credit mare is trained by Jean Tourigny for breeder Claude Hamel, who co-owns the mare with Michel Damphousse. She paid $3.80 to win. 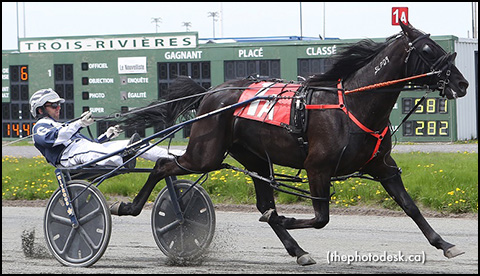 There is one more week of preliminary competition before the top eight money winners in each division compete in their respective $30,000 finals on June 11.

In the $8,400 Invitational pace, carded as race 10, Code Word won for the second straight week with driver Maxime Gaudreault, scoring a 13-1 upset and paying $28.00 to win.

Jocelyn Gendron brought in the highest payoff of the season as he won the seventh race pace with Northern Trophy at odds of 33-1. Taking the lead after the opening quarter mile, Gendron would not give way to 1/5 race favourite Hard Rock, putting him away in the backstretch and holding off CF Sting Rei. Northern Trophy paid $69.10 to win.