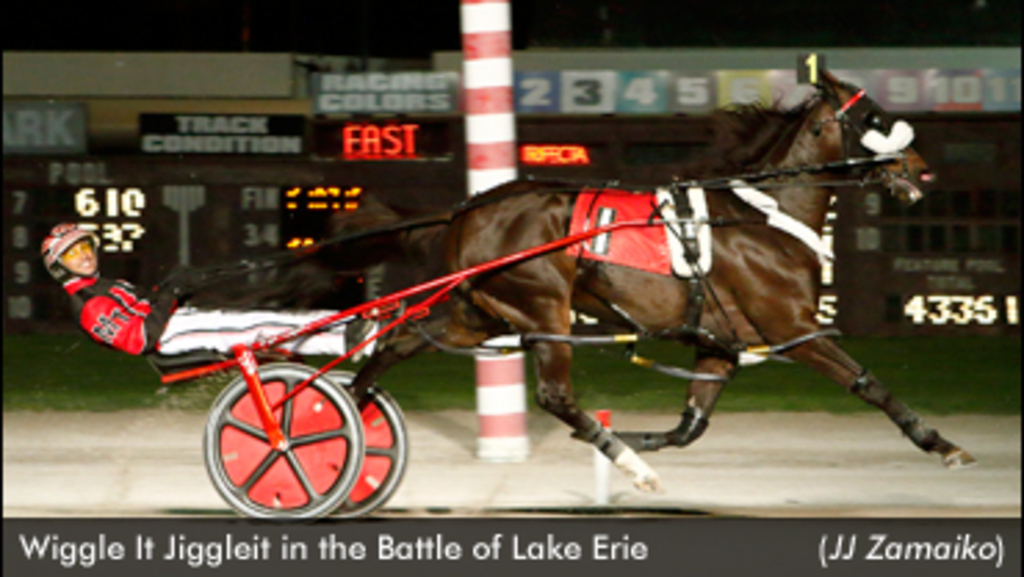 Wiggle It Jiggleit rebuffed Indiana rival Freaky Feet Pete in their first match-up of the year en route to setting another track record at Northfield Park in the 31st edition of the $200,000 Battle of Lake Erie on Saturday night (May 21).

Making just his second start at Northfield Park after setting a 1:49.3 track record for three-year-old pacing geldings in the 2015 Carl Milstein, reigning U.S. Horse of the Year Wiggle It Jiggleit etched his name in the local record books again with his speedy score in the 2016 Battle of Lake Erie.

After the race, winning driver Montrell Teague admitted that he was expecting a bigger opening quarter.

"I was thinking more would leave out of there, but my horse was unbelievably grabby and ready to roll so they probably wouldn't have had much of chance anyways because I had a hard time holding him.

"I saw :28 and I timed the gate as much as I could and it worked out good. And right about the half, I looked over and I saw Freaky Feet Pete so I knew it was going to be a war after that," said Montrell Teague, noting that Wiggle It Jiggleit has shown strong back halves at Yonkers Raceway in the Levy Series.

Clyde Francis trains Wiggle It Jiggleit for George Teague Jr. Inc. and Teague Racing Partnership. The Mr Wiggles gelding -- rebounding from his first back-to-back losses in Canada -- now has five wins from eight starts during his four-year-old campaign in which he's banked over $300,000 in purses.

"He's much better tonight than he was last weekend. He was much better last week than he was the week before," said George Teague, noting that his double millionaire pacer was battling sickness up at Mohawk Racetrack. "I'm not making up excuses, but he wasn't at his best [in Canada]."

Wiggle It Jiggleit is now headed to Harrah's Philadelphia next weekend for an Invitational, carded as part of the May 29 program with the Maxie Lee for older trotters and the Betsy Ross for older mare pacers.

Saturday's undercard produced a world record performance for four-year-old male trotters on a half-mile track as Ontario Sires Stakes graduate Muscle Up The Goal toured the 'Flying Turns' in 1:52.3.

After blasting to the lead from the outside post seven and carving out panels of :27.2, :56.2 and 1:24.1, heavy 1-2 favourite Muscle Up The Goal extended his leading margin in the final turn en route to the record-setting victory in the $20,000 Open I Trot. Aaron Merriman drove the son of Muscle Mass for trainer Chris Beaver and Toronto owner Synerco Ventures Inc. Sam Schillaci trainees completed the top three finish order with Pay The Winner (Ronnie Wrenn Jr.) following three and a half lengths behind in second and Blackwolf Run (Schillaci) third.

William Sartin and Mark Salerno's Hidden Land went from last to first to notch her third straight victory in the $20,000 Mares Open Handicap Park at Northfield. The five-year-old daughter of Badlands Hanover, driven by Don Irvine Jr. and trained by Brad Irvine, won this week's distaff event in 1:53.4 by two and a quarter lengths over Zumba (Joe Bongiorno) and Lease Ness Monster (Ronnie Wrenn Jr.).