Driver Matt Kakaley, a “youthful veteran” of the sport at age 33, recorded the 5,000th victory of his still-young career when he got Traffic Jam home first in the fourth race on the Sunday (May 2) card at The Downs at Mohegan Sun Pocono.

Kakaley let the Artiscape mare work her way to the lead at the quarter, rated the pace to the half, then kept her ahead of her pursuers for her second win of the year. Matt was in the bike for her first seasonal victory as well, on March 14. 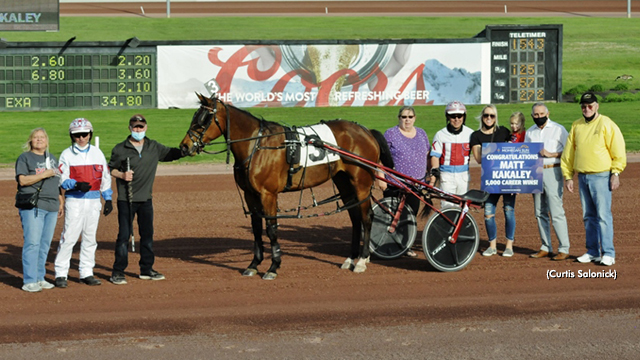 In addition to the 5,000 victories, Kakaley-driven horses have won over $81 million. His best year for victories came in 2011 when he was first 441 times, including 289 of them at Pocono to be the last driver not named “George” to top The Downs in that category; Matt guided the winners of over $9 million in 2017, including Kentucky Futurity winner Snowstorm Hanover and three $100,000 wins with All Bets Off.

Kakaley also accounted for the $15,300 featured pace for mares, putting heavy favourite Shouldabeenatd on the lead and keeping her pace strongly, including her own last half in :54.4, to cross the wire first in 1:51.3. The daughter of Sweet Lou won her second straight for trainer Ron Burke and the partnership of Burke Racing Stable LLC and Weaver Bruscemi LLC. In all, Matt had four victories on the card.

Featured on the Monday card at 12:30 is a pair of $12,800 trotting contests for the highest-priced claimers at The Downs, with several recent winners looking to extend their current form streaks. Program pages will be available at https://www.phha.org/downsmsppps.html.