Godfrey Out As OLG Chair

OLG Chair Paul Godfrey announced at a Thursday night press conference that he has been fired from his post as the Chair of the Ontario Lottery and Gaming Corporation. 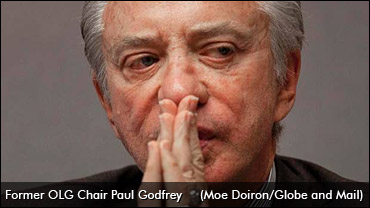 In 2010, Godfrey was brought in by the Liberal government to clean up the OLG amid revelations of reckless spending and insider lottery wins. Two years later, alongside then Finance Minister Dwight Duncan, Godfrey dropped the bombshell heard around the harness racing world when he announced the new OLG modernization strategy that called for the end of Ontario's slots-at-racetracks program.

Godfrey, three years into a five-year contract, was a massive supporter of a downtown Toronto casino complex. When news broke that Toronto's revenue sharing deal was potentially sweeter than that offered to other cities, the perceived favoruitism landed him in hot water with Ontario Premier Kathleen Wynne. Last month Godfrey defended pay raises to OLG executives while the province was under a public sector wage freeze, again raising the ire of the Premier and Finance Minister Charles Sousa, to whom Godfrey and the OLG reports.

On Thursday, Souza confirmed that Peter Wallace, secretary of cabinet and the head of Ontario's civil service, take over for Godfrey as Interim OLG Chair.

“I met with Paul Godfrey this afternoon and thanked him for his leadership,” said a statement from the Finance Minister.

Reports also indicate that the entire OLG Board of Directors has tendered letters of resignation.

Sad to say but I agree with

Sad to say but I agree with Jim Cauchon's remark 100%. The real problem with harness racing is it has not been a financial tool that other business would follow. That would be an understatement to the max.

To address the real problem is to tear harness racing right down and to start over.
Start over by ways of creating a product that the fan support is in accordance with the purse structures.

The problem has never been with the politicians. It has been with lack of support to the support. The lack of marketing into a financially losing company.

It's time to be honest about the state of affairs of harness racing and to accept the adjustments required to keep the business alive. Accept the cold hard facts.

Well, well, well Mr. Godfrey and his cohorts have been thrown under the bus with we the horse people! Although we are overall, compassionate men and women, if these people are looking for sympathy they better get a dictionary!

horsepeople,,,,its a happy day id say,,,,but take it from just a horsebettor...and the one obvious thing that was a positive out of all of this has been.
YOU CANNOT RUN HARNESS SHOWS IN TOWNS WHERE THE PURSES OUTWIEGH THE HANDLE!! PERIOD!!....for goodness sakes, you have to be honest, dont you?

if you all get a second chance with this guy gone, at least be honest with the taxpayers and the plain old bettors..

sudbury, sarnia, woodstock, dresden,and small town trax SHOULD NOT EXIST without a look in the mirror. You either get these shows onto the HPI platform, and/or available to US markets, or maybe even better, and really a must,,,available to computers and OLG terminals everywhere, as part of a larger OLG strategy... otherwise, you are living in a delusional world....stop the ridiculous concept of subsidizing a product that is dying in alot of these smaller markets.

and while were all at it and breathing a bit easier this morning,,,and not much easier,,,,,push, push, push for test project,,single game wagering exclusively on site at existing racetracks,,,,new generation of fans will be at your doors..you need to explore this opportunity sooner than later.

AND, Now who goes to jail?Too

AND, Now who goes to jail?Too strong?Too soon? I think not. Jim Feeley

Liberal politics better include a get out of jail card in his severance package and with all the underhanded schemes lets hope the Auditor General goes after everyone including Larry Tananbuam remember the Bingo King and Godfrey's closest advisor why support horse racing just put slots in my bingo parlours.
Auditor General with open eyes will not let McGuinty, Duncan, Godfrey or Tananbuam away scott free this was an all Liberal scandal for big dollars.

Can't help but wonder if the

Can't help but wonder if the Auditor General uncovered something that resulted in this decision by Wynne, that has confirmed what we horsemen have said all along...

Another one of the big 3 that

Another one of the big 3 that was involved in killing the Harness Racing Industry. How can Finance Minister Charles Sousa,knowing what he now knows about Mr.Godfrey and his shady deals, "thank him for his leadership"?

Here is your hat...what is

Here is your hat...what is your hurry.And you will never have to count sheep at night...just start counting the thousands of lives you have destroyed during your tenure.

Godfrey is a died-in-the-wool

Godfrey is a died-in-the-wool Progressive Conservative and former President of the provincial association. Did anyone really believe he'd use his position to make the lives of hard-working horsepeople better?

Halleluyah, not a moment to

Halleluyah, not a moment to soon, the Emperor had no clothes, hopefully this turn of events will not save the Liberals in the next election.

He was everything a person in

He was everything a person in charge of the OLG shouldn't be. Under the G...... goodbye.

I hope Mr Godfrey is offered

I hope Mr Godfrey is offered some transition funding to allow him some time to transition his behaviour to a more human friendly attitude that will serve him better in his retirement. This transition funding is in lieu of the subsidy he was receiving during his three year OLG career and will help him transition away from the power and lifestyle he previously enjoyed. If I hadn't sold 7 yearlings for less than the stud fee I would feel badly for you, but instead on behalf of the thousands of people who have had there lives greatly encumbered by you I'd suggest you not let the door hit you in the buttt on your way out.

Lots of questions and answers

Lots of questions and answers ahead.What the hell is really going on.The biggest rat of the bunch is fired. Just somebody start investigating this crap before its all over.

What a good news!!! 1rst strike Mr. McGuinty. 2nd strike Mr. Duncan.. 3rd strike Mr. Godfrey!!!! after the AG report it will be an homerun!!! Could be a light (small) at the end of the tunnel for Horse Racing Industry... Finally, they might realize the huge mistake they have done , ending the slots at racetrack program and killing our industry involving 60,000 people, over 30,000 horses and destroying the breeding in Ontario.

And not a moment too soon!

And not a moment too soon!

Well, we did manage to

Well, we did manage to accomplish at least one thing. Couldn't have happened to a better person (except maybe McGuinty and Duncan) THE THREE BLIND MICE!!!

Thank God for small mercies. If the entire OLG board resigns, good riddance to them, maybe the next board won't be so greedy and will receive a sensible salary.

Fired one year too late.

Fired one year too late.

First McGuinty and Duncan jump ship and now Godfrey. Must be something that scares them. Good riddance to all of them but should they be able to get off so easily? With the billions of dollars in waste and destruction that they were a part of, why should they be walking free?

Why in the interview they now

Why in the interview they now say Minister Sousa will "reveal the revenue sharing formula" when he is ready?? Is that not what we had?? but they called it a "subsidy" now that we are out it is back to a revenue sharing again?? WHEN WILL THIS SCANDAL EVER END

And it just gets BETTER

And it just gets BETTER !!

According to Godfrey the whole OLG Board has resigned/left/been fired. !!

There is now a chance we can get this mess sorted !!

I wonder what it cost to get

I wonder what it cost to get rid of Godfrey?
Doug McIntosh

Good riddance to the

Good riddance to the self-appointed saviour of Toronto.

Ontario horsemen should still be demanding an investigation regarding the American Casinos Association's alleged involvement in all this and political funding of the Liberal party.

In reply to AND THE SUN WILL SHINE ONCE by duke77

The horse industry is going

The horse industry is going from $345 per year to $60 million per year, the panel is coming in with a plan sometime between June & Oct. I think the industry is in big trouble. A question i have asked a few times before and haven't got an answer is " What kind of previous experience has this panel had in the horse racing industry, be it owners trainers drivers etc"?
One of the new income revenues was supposed to be sports wagering, which is Bill C-290, a bill that was passed unanimously in parliament. This bill is stalled in the senate, a group of patronage appointees that we don't even need. Lets get the bill back in parliament get it passed & go on with entity that hopefully will help will give the industry a fighting chance.

Did he resign or was he fired

Did he resign or was he fired ??? My guess is the latter !

AND THE SUN WILL SHINE ONCE

AND THE SUN WILL SHINE ONCE AGAIN