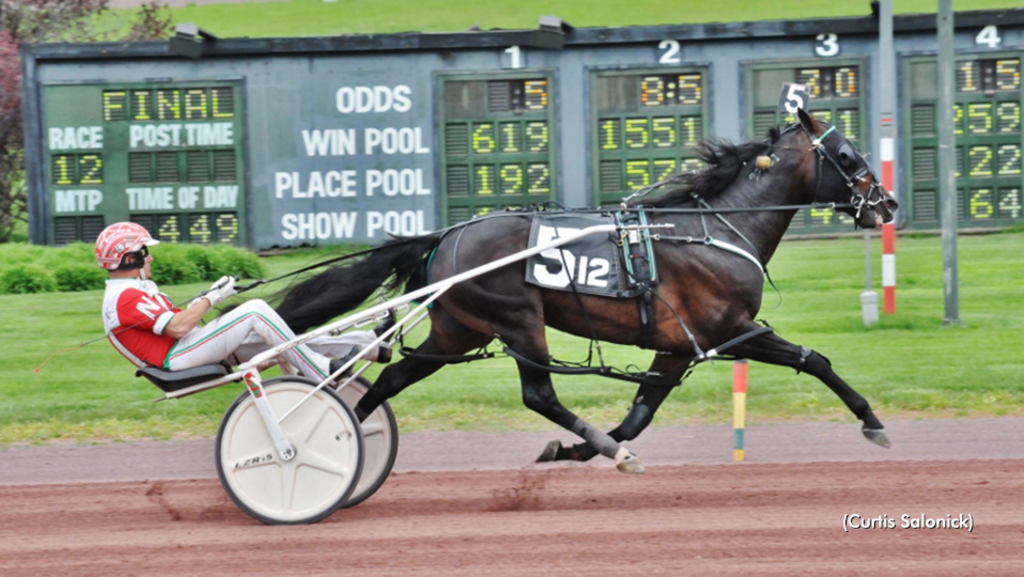 Carlisimo and J M Mandamin were successful in the two $17,500 featured paces on the Saturday afternoon (May 14) card at The Downs at Mohegan Sun Pocono, with Carlisimo the faster of these two winners by a tick with his victory in 1:50.

Carlisimo was sent to the front by George Napolitano Jr. just past a :26.3 quarter, then got a breather to a :56 half. The son of Shadow Play then had to reach down for a :26.1 third quarter to hold off a long and strong bid by Bettor Memories past the 1:22.1 three-quarters and most of the way to the wire. Carlisimo finally establishing some daylight late in a 1-3/4 lengths win against his tough opponent. Carlisimo is trained by Robert Cleary for owner Eric Good.

J M Mandamin got to sit a nice two-hole trip behind fractions of :26.1, :54.3 and 1:22.1, then went to the Pocono Pike and completed an easy three-quarters of a length victory over Tito Rocks for driver Simon Allard, trainer Jennifer Bongiorno, and owner Robert Weinstein. The gelded son of Mach Three was winning for the first time in 2022, as was the case for Carlisimo.

The 11-year-old Crazed gelding JL Cruze now has career earnings of $1,699,811 after winning the trotting division of the day’s $17,500 classes. JL Cruze got a slow half then trotted home in :56.2 to be two lengths ahead of Rich And Miserable at the end of a 1:53.3 mile for driver Matt Kakaley, trainer Eric Ell, and the partnership of Ken Wood, Bill Dittmar Jr., and Stephen Iaquinta.

For the third-straight week Go West Go Fast equaled the Pocono record for price paid via a claim, going for $40,000 while winning for the sixth time in his last seven starts in 1:51.1. And the fastest time of the entire Pocono meet was posted by the winner of another division of the top claiming pace, as Rogerthat Bluechip refused to yield through fractions of :25.3, :54.3 and 1:21.1 in progress to taking a mark of 1:49.2. A third 1:50 mile on the Saturday card was added by Lets Roll, who came out of the pocket to stop the timer in exactly that time.

Three $30,000 divisions of Pennsylvania All-Stars racing for the sport’s “glamour division,” the three-year-old pacing colts, will highlight Sunday’s twilight program at The Downs, with first post at 5 p.m. for the card topped by the best of the state-sired group of fast sophomores. Program pages are available at on the PHHA website.