Cindy Michelle Looks To Step Up 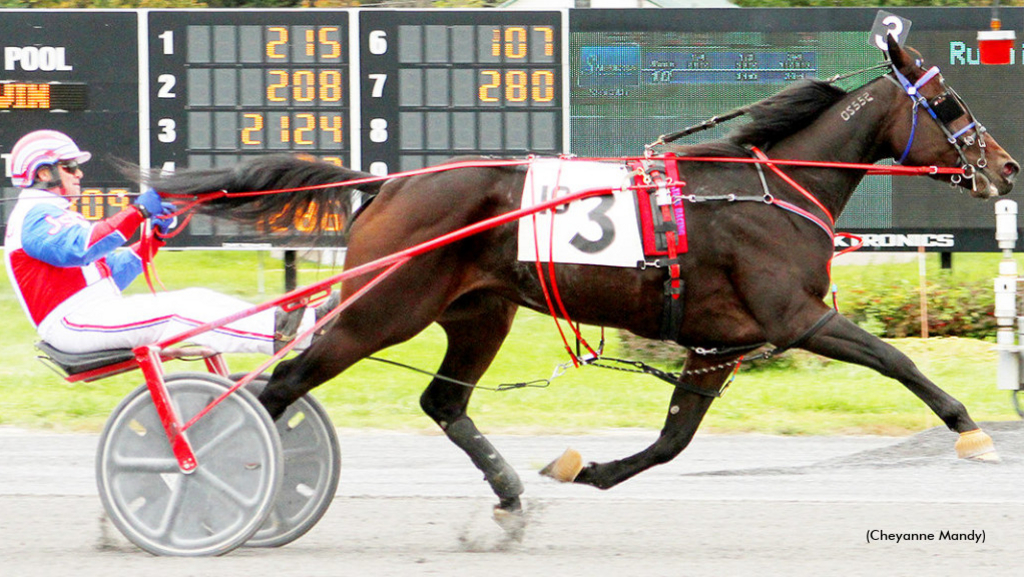 Peter Barbato and Sam Bova might be anxious watching their horse Cindy Michelle step up to face a group of Grand Circuit winners Saturday (May 14) in the first round of the Graduate Series for four-year-old female trotters at The Meadowlands, but the owners are excited to see what happens.

The mare, named after Barbato’s wife Cindy and Bova’s girlfriend Michelle, was the 2021 New York Excelsior “A” Series champion and enters the Graduate — her first-ever start on the Grand Circuit — with 12 wins in 25 career races.

Cindy Michelle is 6-1 on the morning line in a group that features 9-5 favorite Bella Bellini, who was a Dan Patch Award winner last year when her victories included the Hambletonian Oaks, as well as Kentucky Filly Futurity winner Katies Lucky Day and Herculisa, who in 2021 became the fastest three-year-old trotter in history on a half-mile track.

Also in the field are Big City Pearl, who twice has finished second in Grand Circuit stakes, and Anoka Hanover, who was a Dan Patch Award honoree in 2020. Rounding out the seven-horse group is Chablis, also stakes-placed multiple times on the Grand Circuit.

Cindy Michelle, who has earned $89,366 lifetime, will start from post three with Brian Sears driving for trainer Linda Toscano.

“Just to be mentioned in a field with some of the horses in there is unbelievable,” Barbato said. “Here we come, and our little horse is going to be part of it. We don’t know (what to expect) but you never get a second chance, and you hate to wonder what if. We figured we would take a shot against the 4-year-olds and see how she does.

“I’m going to be nervous as all heck but I’m going to be at The Meadowlands with a couple of my buddies, having a cigar watching her, and I just hope she can compete. You never know. That’s why they race the race. I only hope she gets a good trip. If she gets a check, I’ll be proud as all heck.”

Said Bova, referencing Rich Strike’s 80-1 win in last week’s Kentucky Derby, “You’ve got to be in it to win. There is hope for us little guys. Maybe Brian Sears can work out a trip for her and we can get a piece of it. I’m excited.”

Cindy Michelle, a daughter of E L Titan-Freeze Frame, was purchased under the name Southwind Yara for $40,000 at the 2019 Lexington Selected Yearling Sale. Unraced at two to give her more time to mature, she won last year’s Excelsior “A” final during a stretch of seven wins in nine starts for trainer-driver John Stark Jr.

“She was a big filly,” Bova said. “She showed us she was going to be a racehorse someday, but she wasn’t ready quite yet (at two). John said we would bring her back at three and he thought she would have a good year. He was correct about that.”

Cindy Michelle opened this season with a fourth-place finish at Saratoga. Given her size, and additional growth this past offseason, Stark suggested giving Cindy Michelle the chance to race on bigger tracks rather than the half-mile ovals that mostly populate New York. Cindy Michelle, who was transferred to Toscano’s stable soon thereafter, has won nine times on half-mile tracks but has three wins and a third in six races on larger tracks, such as The Meadowlands.

“John did a wonderful job,” Barbato said. “He’s an extraordinarily patient man. After her first race this year at Saratoga, he said she would be a better big-track horse than she is on the half. We’re small-time guys, and that Linda considered taking a horse from us, it’s a privilege and an honor to be in her stable.”

Cindy Michelle won her first start for Toscano, defeating a field that included 2021 Yonkers Trot winner Johan Palema in 1:55.1 over a sloppy track at The Meadowlands last week. Starting from post nine, she was eighth — nearly 10 lengths from the front — at three-quarters before rallying with a :27.2 kick home for driver Scott Zeron.

It was the first time she won in five tries on an off track. She made breaks in the four previous attempts.

“I didn’t know what to expect,” Bova said. “I just wanted her to stay flat. Scott Zeron did an excellent job with her. He didn’t really push her. She did it all on her own, basically.”

Bova and Barbato both have been horse owners since the late 1970s. Barbato bought his first horse after graduating from college while Bova was brought into the sport by a friend. They became partners after being introduced to each other by Jodi and Sam Schillaci, who are based in Ohio. Jodi is Stark’s sister.

“I have a 25-year-plus relationship with Sam and Jodi,” said Bova, who lives on the shores of Lake Erie, not far from Buffalo. “I’ve got about 30 horses with them and four or five babies with John. My success is because of them. They’re the driving force. I met Peter through (the Schillacis). They had Peter as an owner, they had me as an owner separately, and one year we went to Lexington and formed a partnership.

“Me and Peter think alike, take care of our horses, take care of the people we do business with, and we hit the ground running. It’s been a great run. I really enjoy the sport.”

Barbato, who lives in northern New Jersey, was at The Meadowlands when it opened in 1976, making Saturday’s race all the more meaningful.

“It’s my home track,” said Barbato, who lives about 15 miles from the Big M. “If you have a horse, you always want to get it to The Meadowlands. It’s pretty amazing. It really is.”

Live harness racing begins at 6:20 p.m. EDT at The Meadowlands and a portion of the 13-race card, from 9-11:30 p.m., will air live on Fox Sports 2 as part of the New York Racing Association’s “America’s Day at the Races” presentation.

The card also includes two $25,000 first-round divisions of the Graduate Series for four-year-old female pacers. Mikala is the 5-2 favourite in the first division, with Hot Mess Express the 3-1 second choice from post nine in her seasonal bow, while defending U.S.Horse of the Year honoree Test Of Faith gets the 9-5 nod in the second.