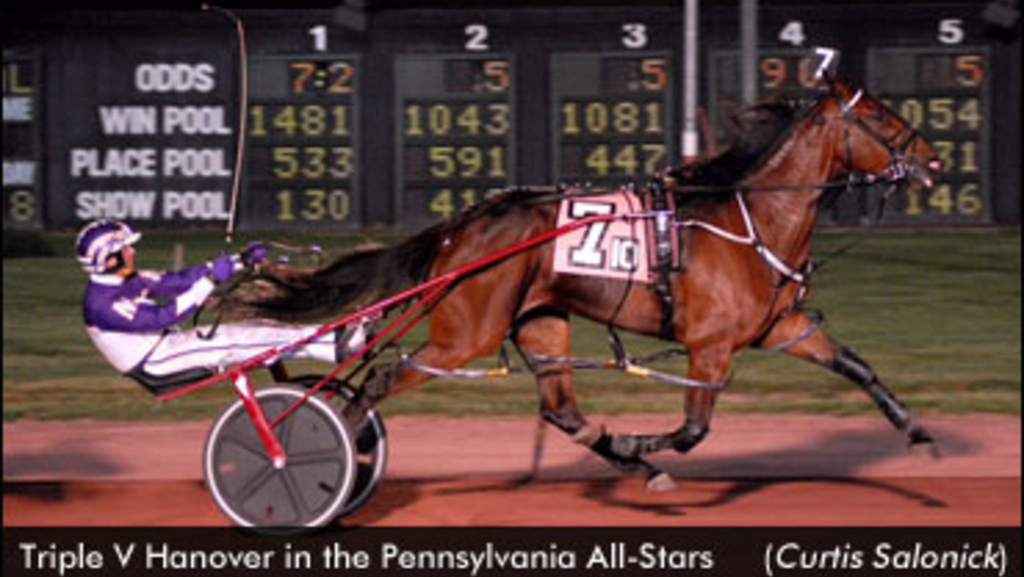 Delaware Ohio resident Brian Brown is the defending training titleholder in the Jugette, having won last year with divisional champion Colors A Virgin – and he’s giving every sign that he’s looking to take his second straight come September 23.

In a Pennsylvania Sire Stakes for three-year-old pacing fillies at The Meadows last week, Brown sent out winner Serious Filly along with second-place finishers Somewhere Sweet and Triple V Hanover. So for Sunday’s $128,000 Pennsylvania All-Stars divisional event at The Downs at Mohegan Sun Pocono, Brown decided to keep out Serious Filly but enter the other two -- and those fillies accounted for half the four All-Stars divisions, with both handled for Brown by Hall of Famer David Miller, the all-time leading driver at Delaware.

First up was Somewhere Sweet, like her stablemate a daughter of Somebeachsomewhere, whom Miller rallied from the pocket into a :55 back half to take a head decision over pacesetting Southwind Roulette, last year’s Pennsylvania Sire Stakes champion, in 1:52, a new mark, for Miller’s Stable Inc. of Kentucky.

Then it was Triple V Hanover’s turn, and that filly tucked, brushed to the lead by the :55 half, and went on to win by one and a quarter lengths in 1:50.3, also a personal best and by far the fastest of the four All-Stars divisions. King Mcnamara of Florida and the Strollin Stable of Ohio, part of the partnership behind Brown’s All-Star colt winner Rise Up Now last night, share ownership in the victorious miss with Buckeye Donald Robinson.

Doctor Terror, who made a break in the Sire Stakes last week, atoned this week from the outermost post seven in her cut, making the lead past the quarter and coming home in :55 to win by a neck over Storm Point, a Sire Stakes winner last week, while lowering her personal best to 1:52.3. The daughter of Western Terror is owned by two Ontarians, trainer Blake Macintosh and Stuart Macintosh, and had another “Mac” in her corner -- driver Mark Macdonald.

In the other division, Arts Jem, beaten a neck by Serious Filly last week, enjoyed the lack of Brown competition, rallying quickly deep in the Pocono Pike, two inside the pacesetter, to edge Macarena Mama in the Pike to her right, in a mark of 1:52.1. The Art Official miss stepped her personal back half in :54.3 to win for trainer Jim King Jr. and two Lincoln Staters, driver Tim Tetrick and the CC Racing LLC of Ray Kusinski.

Oh – and Serious Filly? She’s in a tough overnight race at The Meadows on Tuesday, and has the outside post nine to boot. Good thing Brian Brown’s UTR in Pennsylvania is currently .867 for the year.

Wednesday’s feature at The Downs is a $30,000 Open Handicap Mares Pace, placed conveniently 11 days before the $250,000 Betsy Ross Invitational at the PA Harness Horsemen Association’s other track of representation, Harrah’s Philadelphia. Handicapped outside in the field of eight is Anndrovette, four-time defending Pacing Mare of the Year and last year’s Betsy Ross winner; to her immediate inside is recent Chip Noble Pace winner Yagonnakissmeornot.