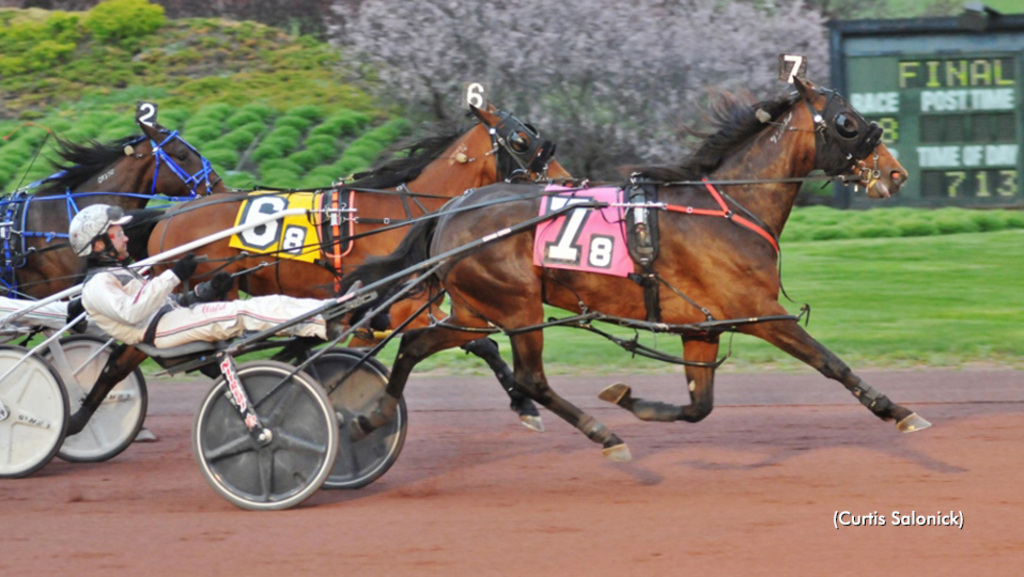 Milieu Hanover got an ideal trip in the $17,000 distaff feature pace at The Downs at Mohegan Sun Pocono Sunday (May 1), and she made the most of the opportunity by closing well to notch a 1:52.2 victory.

Beach Crazy put the field behind her by leaving strongly and posting fractions of :26.3, :57 and 1:24.1, at the latter station being joined by first-over A Better Game. That filly began an uncovered journey from beyond midfield in front of the stands, with Milieu Hanover and driver Marcus Miller riding her cover all the way up before tipping wide for the stretch drive.

A Better Game was able to make the stretch lead in a gallant showing, but Milieu Hanover was a fresh horse just to her right, and she proved the stronger late by three-quarters of a length. A winner of over $150,000 at three last year, mostly in the Pennsylvania Sire Stakes, the winning daughter of Betting Line won her second start of the year after a good-closing second in her bow for trainer Nicholas Devita and the partnership of Devita Racing Stable Inc., David Hamm, and Christopher Giaccio.

A $16,500 co-feature handicap pace for the highest-priced claimers on the grounds was won by the Bettors Delight gelding Bravo Tex N in 1:52.1. Sullivan outleft everybody, put up initial splits of :27.4 and :56.4, then tried to scoot away by going :26.4 down the back to a 1:23.3 three-quarters. But Bravo Tex N, circling wide from second over, had just enough late foot to edge the pacesetter by a head. It was the second win of the evening for the teaming of driver Matt Kakaley and trainer Darren Taneyhill, who with the win tied Michael Spaccarelli Jr. at the top of the Pocono trainers table with 15 victories; the sharp Bravo Tex N is owned by Eric Prevost.

Each of the five winningest drivers at Pocono in 2022 – in order, Matt Kakaley, George Napolitano Jr., Tyler Buter, (tie) Marcus Miller and Jim Pantaleano – had multiple victories on the card; Kakaley and Miller had three each, the other trio had two each.

There will be racing on Monday (May 1) and Tuesday (May 2) at The Downs, with both cards starting at 1:30 p.m. (EDT). Program pages are available at https://www.phha.org/downsmsppps.html.