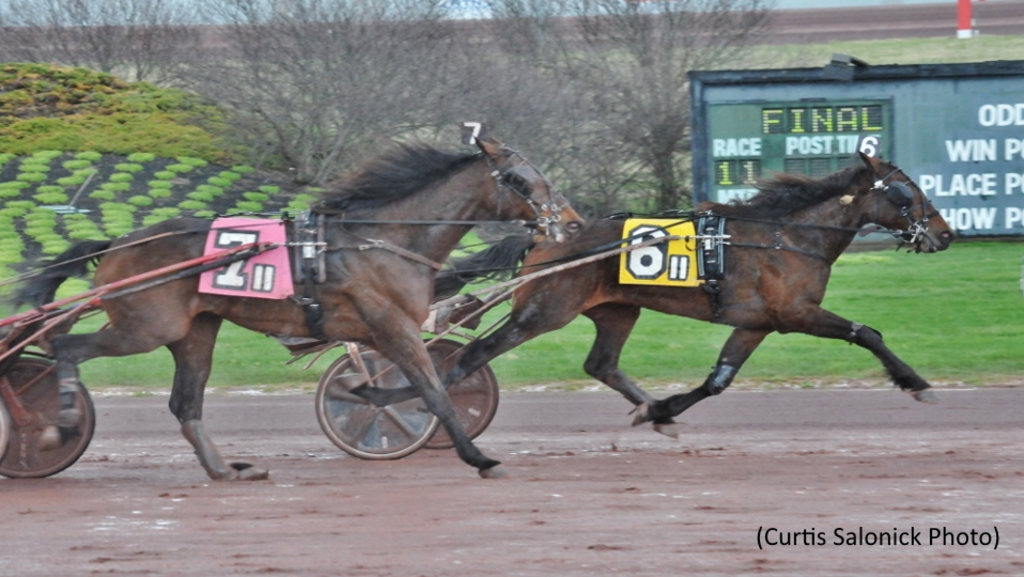 The Bobby Weiss Series for developing three-year-olds matched males on both gaits during the “sloppy” Saturday afternoon card at The Downs at Mohegan Sun Pocono, with three sections of trotters contesting their second preliminary and five divisions entered in their first prelim, with all of these races going for $20,000.

Among the trotters, the Walner gelding El Toro Loco was the only repeat winner, successful in the off going in 1:57.2 as the only Weiss winner on either gait who did not lower his mark. Tyler Buter, top driver on the day with four victories, raced El Toro Loco on the lead and the pair found enough to withstand a late charge by That Ole Bar Stool by a neck for trainer Tom Loughery Jr. and Lone Wolf Stable.

The other two trotting sections were taken by Cantab Hall colts, with Dandy proving the faster of this pair by lowering his mark by nearly seconds to 1:56.1. The Frank Ingrassia trainee has shown a nasty late kick for owner/trainer Jackie Ingrassia in his Weiss starts, and here he beat :28 home to catch Beer Cheese by three-quarters of a length.

Backstreet broke his maiden in his 2022 debut while taking the other trot division in 1:57. He and driver Scott Zeron spent the last half in first-over position, and just did wear down pacesetter Bjornsson by the shortest margin possible for trainer Nicholas Devita and owner David Hamm.

Team Zeron/Devita also combined to take the fastest of the five sections of the pacers’ first prelim with the Always B Miki colt All Or Nothing, who charged up the inside of favoured pacesetter Shake It into a :27 last quarter to defeat that one by a half-length in 1:52.3 for owner John Cummins. All Or Nothing has been all “all” in his career so far: the unraced colt at two is undefeated after two starts.

Also undefeated this year is the So Surreal gelding Lanjo Lee, who shipped in from Saratoga and promptly notched his third triumph of the campaign in 1:53. Lanjo Lee had the biggest winning margin of the Weiss action, 4-1/4 lengths, for driver Tyler Buter, trainer Jeff Sorensen, and owner Gordon Lee Swift.

The Huntsville gelding Keystonefightnight won his second straight, stopping the timer in 1:55.1 for driver Mark MacDonald and trainer Ray Schnittker, the latter co-owner with Max Hempt, Steven Arnold, and Tammy Flannery. The pacesetter had heavy favourite Kingsville challenging him on the far turn, but when that rival went off stride at head stretch, Keystonefightnight was able to be two lengths clear at the wire.

Another big favourite, Captaingiddyupngo, had to resist the late inside charge of Greg The Leg by a half-length before recording a maiden victory in 1:54.1, last quarter in :28. George Napolitano Jr. drove the Captaintreacherous colt for trainer Tony Alagna and owners Al Libfeld, Marvin and Lynn Katz, and Sam Goldband.

Crack A Smile set most of the pace in his Weiss division, saw favoured Silverstone pass him going into the far turn, yet was still able to rally back over that foe by 1-1/4 lengths while recording his first lifetime tally in 1:56.1. Anthony Napolitano drove the Heston Blue Chip gelding, new to trainer Mike Watson’s barn, for owners Geoffrey Howles and Souren Hovsepian.

Pocono will be back in action Sunday for a 5 p.m. twilight card, with a $17,000 pace for distaff and a pair of $16,500 events for high-priced claimers sharing the spotlight.