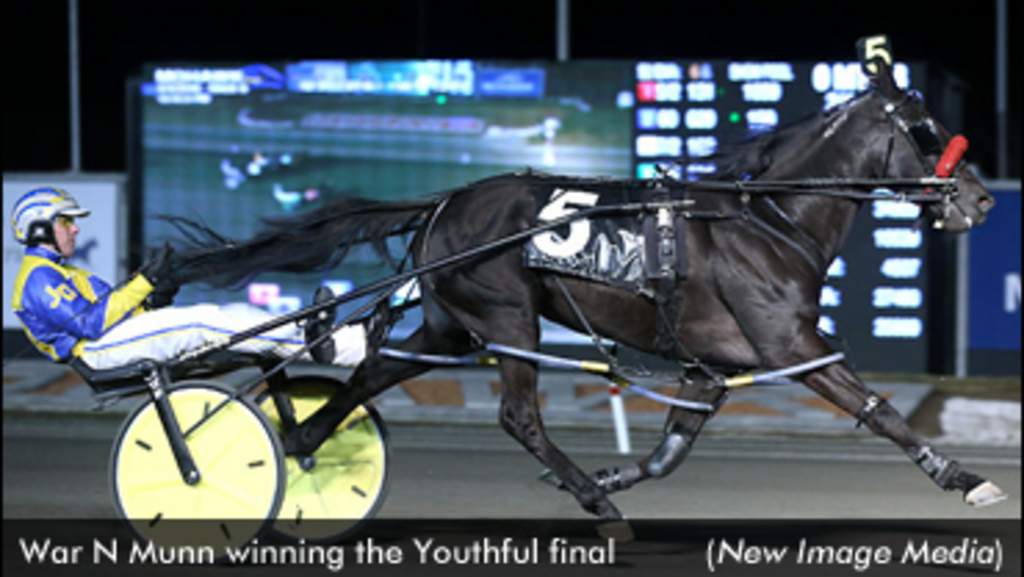 War N Munn rallied home off cover to defeat a trio of North America Cup eligible colts in the $39,800 final of the Youthful Series featured on an eventful Saturday night (April 9) at Mohawk Racetrack.

War N Munn was a 1:52.2 winner over North America Cup eligibles Easy Lover Hanover, Flaherty and The Catamount Kid in the series for three-year-old pacers that are non-winners of three races and $15,000 in 2015.

Flaherty led the field of eight through opening panels of :27 and :56.1 while The Catamount Kid (Doug McNair) tipped first over down the backstretch and War N Munn followed his cover. Mach Power (Randy Waples) also pursued in the outer flow, third over, before breaking stride.

The Catamount Kid moved alongside the leader as they approached three-quarters in 1:24.2, but War N Munn rallied off his cover into the stretch and paced away, despite drifting out, to score his first win since sweeping The Count B in February At Woodbine. Easy Lover Hanover came through for second-place, finishing four lengths behind the winner, while Flaherty out-finished The Catamount Kid for third.

War N Munn was the slight favourite and paid $5.80 to win.

The 1:52.2 winning time was a lifetime-best clocking for the Stonebridge Regal-Stonebridge Venus colt, who finished second by a neck after recovering from a break in stride in the first leg of the Youthful Series and had to qualify back missing the second leg.

"He's on the left line pretty bad and we still haven't got him figured out. As you saw, he finished out in about the seven-path there," said trainer Carmen Auciello after the race. "He was hitting a knee and he made a couple of breaks when he got crooked and whacked his knee, but we've seemed to have gotten him off a knee. We've just got to get him straightened out now."

War N Munn, who had competed in the Sagamore Hill at Yonkers Raceway between his WEG series endeavours, is now four-for-seven this year for owner George Munniksma of Washington, New Jersey. Lifetime, the black colt has six wins in 16 starts and over $100,000 in purse earnings.

"He's just one of those horses that has a motor," noted Auciello. "Every time you ask him to go, he goes faster. I think that's part of the reason why he can be a little bit erratic at times, but I think as he gets older and gets a little more experience, he'll get better."

War N Munn will compete in the The Diplomat Series next and the Ontario Sires Stakes this season.

While the Youthful wrapped up on Saturday, another series began. Musical Rhythm was an easy winner in the $20,000 opening leg of the Don Mills Trotting Series, extending his win streak to eight.

Musical Rhythm is owned by trainer Ben Baillargeon along with Santo and Nunzio Vena, and Claude Hamel. The four-year-old son of Cantab Hall will be aiming for his second series title after sweeping the General Brock in February at Woodbine.