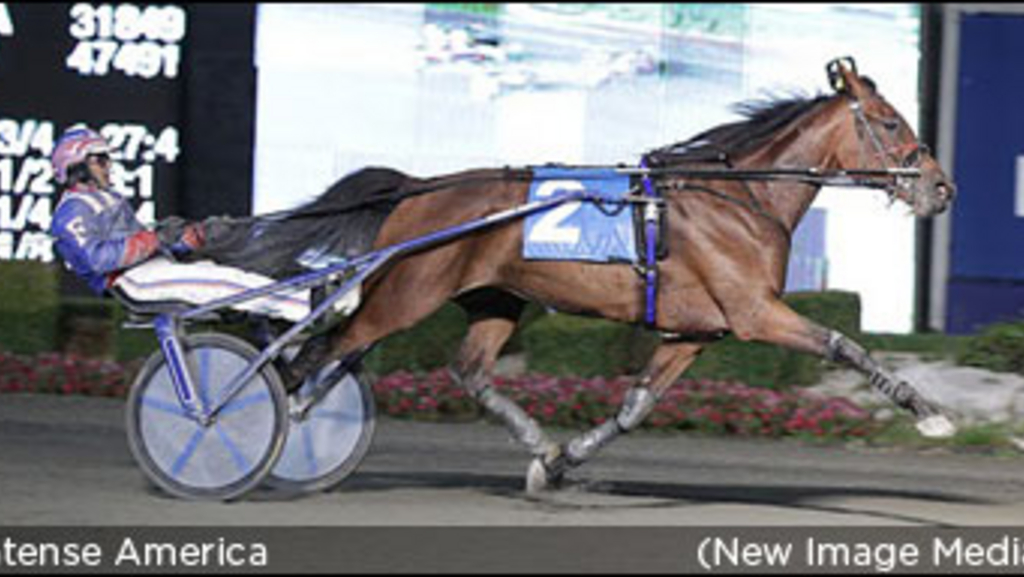 Kendra Hanover, who was making her debut for trainer Rene Allard following a private purchase, cruised to an easy victory in her $20,000 division. Jody Jamieson hustled the four-year-old daughter of Kadabra-Ken Col Maggie off the gate and after parking past the first post in :27 she brushed to the lead and carved out middle fractions of :58.2 and 1:27.4 before using a :28-second final frame to seal the deal by 1-1/4 lengths over Sheer Glide in 1:55.4. Can I Say rallied from second-over to grab a third-place finish.

Allard Racing Inc, Yves Sarrazin and Howard Taylor received a partial return on their recent investment thanks to the mare’s popular win. Sent off as the even-money choice, Kendra Hanover improved this year’s record to 4-1-1 from eight assignments thanks to the victory. The nine-time winner pushed her bankroll to $99,920 in the process.

Intense America, who went postward as the 2-1 choice in the second division, powered off cover in the lane and stormed home to win by open lengths in 1:57 for driver Luc Ouellette and trainer Rene Dion. Starting from Post 9, the five-year-old daughter of Taurus Dream-Intensite got away seventh while Aquanilla and Daylon Miracle battled to the quarter pole in a :27-second clip. Daylon Miracle worked her to the lead, but later gave way to Onthemoneyside who made the front and proceeded to take the field to the half in a :58-second clip.

Shanty Irish was the next mare to take a turn on the lead as she teed off in the backstretch and rushed to the top going into the final turn. She hit the three-quarter pole in 1:28.1 over a track rated ‘good’ with a one-second allowance, but she lacked staying power and faded out of contention. Intense America, in the meantime, wound up catching cover in the back-half of the mile before firing home in a :28-second clip en route to posting the win by 2-1/2 lengths over Cook Off in 1:57. Onthemoneyside took home the show dough.

Ecurie Gaetan Bono Inc of Montreal, QC owns the six-time winner who has earned a 2-2-1 record from nine trips to the track this season. She’s made more than $40,000 this season and a grand total of $207,350.

In other Monday evening action at the Rexdale oval, Take My Picture reigned supreme in the $34,000 Preferred Trot for the team of driver Jack Moiseyev and trainer John Drennan. The gelding got away third while Hesgotlegs blasted to the lead from Post 10 and rolled the field to the opening quarter in :25.3 – the fastest first quarter ever trotted at Woodbine Racetrack. Hesgotlegs was still in charge of the tempo at the half in :55.1, but he was confronted and collared by the first-over Take My Picture at the three-quarter pole in 1:25.

Take My Picture then used a :28.4 final frame to hold on for a head decision over the late-closing Watkins in a time of 1:53.4. Bax Of Life rounded out the top three finishers in the 10-horse affair.

Joe and Laurie Davino of Clarksburg, NJ own the six-year-old son of Classic Photo-Habits Lady who is 4-for-10 this season with earnings in excess of $50,000. The 17-time winner bumped his lifetime bankroll to $708,832 with the win.