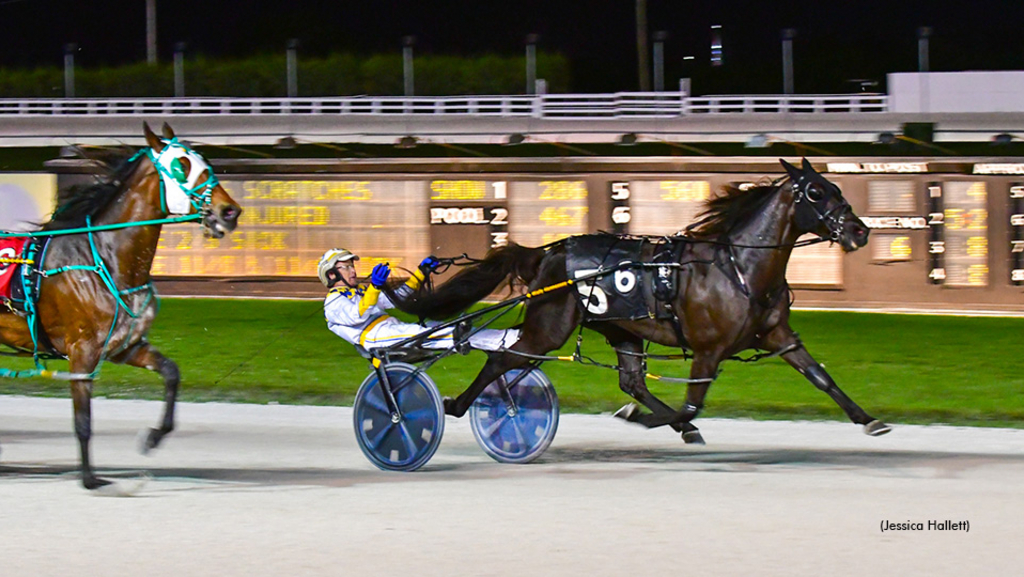 Sea Shadows, driven by Wally Hennessey, stepped up to the top class for mares on Tuesday night (April 5) at Pompano Park and extended her winning streak to three in the $14,200 Open Pace for mares.

Sea Shadows held off the pocket-sitting Powered By Mach (Joe Chindano Jr.) by a long neck on the wire with The Stunning Nun N (John MacDonald) third. Vicious Circle, actually closing fastest of all, finished fourth while Ourlittlemiracle picked up the minor award.

"The mare [Sea Shadows] is very sharp now," said Hennessey, who also trains the gallant mare. "I wasn't concerned about stepping up the notch to the Open as her last two wins were so good on the front end. She really sprung off the wings tonight and she went that :26 and change opener very easily.

"You know, Paul O'Neil owns her and she reminds me so much of the other grand mare that the O'Neils had, Godiva Seelster, a few seasons back."

Godiva Seelster landed in the Hennessey barn last fall and has eight wins since her arrival and has only missed one cheque in the 20 starts since.

She returned $3.40 to her multitude of faithful.

The seven-year-old daughter of Always A Virgin, who has won in the Open class on several occasions this season, took advantage of this slight class dip and wired her opponents in 1:53.2 off of fractions of :26.2, :57 and 1:25.3 with a :27.4 closing panel sealing the deal by a half-length over Roll With Angel (Ken Holliday), with the fastest closing Protect Blue Chip (Rick Plano) third. Tuapeka Jessie N was fourth while Donegalartchokin N picked up the nickel in the field of seven.

Trained by Angie Coleman for Fox Racing Inc,. LA Always Amartini won for the sixth time this semester in 12 starts to send her seasonal earnings piercing the $50,000 plateau. She has banked $339,135 lifetime.

Racing continues on Sunday night with a competitive 10-race program featuring a septet of the best pacers on the grounds including Seeing Eye Single, looking to extend his winning streak to four in the Open Pace. Of course, the track will offer its popular Pick-4 with a $15,000 guaranteed pool that has an industry low 12 per cent takeout. Post time is set for 7:20 p.m.