Eight Is Great For Classic Gent 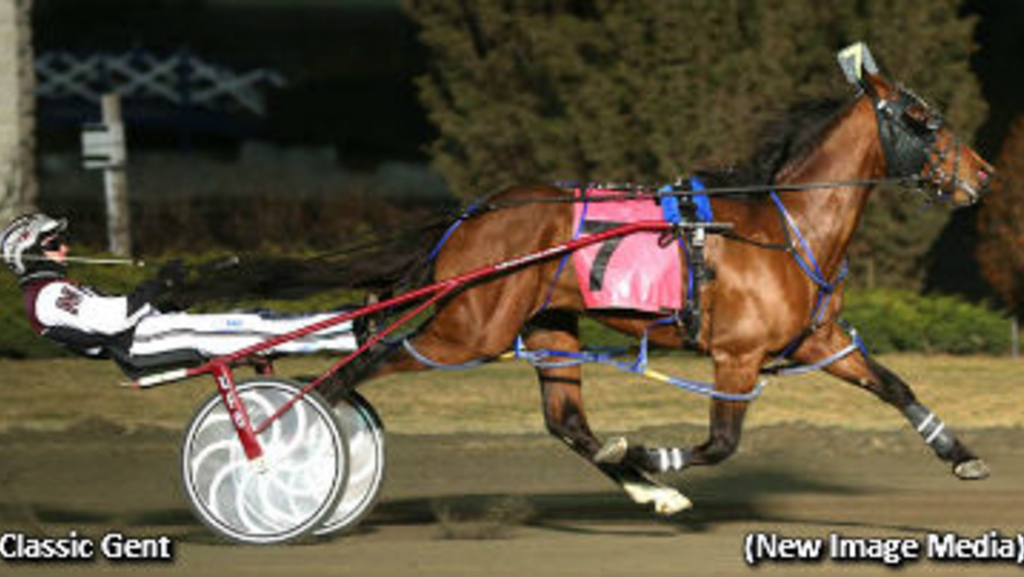 The second leg of the Youthful Series was contested Thursday evening at Woodbine Racetrack, and for the second week in a row Classic Gent came up extra large.

The streaking son of Blissfull Hall-Northern Jade, who entered the assignment a perfect 7-for-7 on the season, extended his winning streak for the tandem of driver Doug McNair and trainer Stan Malec.

McNair was third and parked with Classic Gent when the first panel flashed up in :27.3, but he eventually took over command from race favourite Orillia Joe as the field moved into the backstretch. Glammit blasted out of the three-hole on the way to the mid-way point, and shortly after the :57-second intermission was served up he muscled to the top.

Glammit continued to lead the field to the three-quarter pole in 1:24.2, but Classic Gent and Orillia Joe were angling off the rail to come after the tempo setter. Classic Gent surged to the lead in deep stretch and staved off a late challenge from Orillia Joe, who came up a half-length short in 1:53.1. Glammit finished third.

Varadero Hanover, who was absent from the first leg of the series, was a powerful winning in the second division in his debut for new trainer Richard Moreau. The three-year-old son of Somebeachsomewhere-Vaudeville Margie halted the teletimer in a career-best clocking of 1:52.

Once in charge, the 3-5 favourite rolled to the three-quarter pole in 1:23.1 before using a :28.4 closing panel to prevail by two lengths over Dreydl Hanover. Pappys Pal finished third.

Reg and Louise Petitpas, Geoffrey Lauzon and Dr. Ruth Irving share ownership on the pacer, who assembled a 1-1-1 record during last year’s eight-start rookie campaign. The colt has now stashed away more than $41,000 to date.

The $37,000 final of the Youthful Series is scheduled for Saturday, April 13.