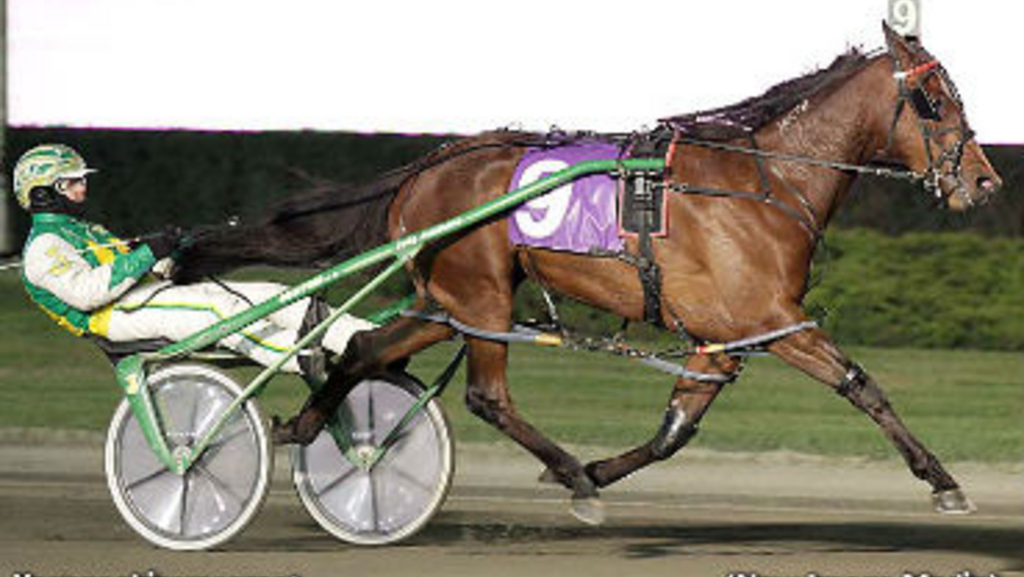 Sophomores strutted their stuff at Woodbine Racetrack on Thursday evening, as the Rexdale oval hosted the opening leg of the Tie Silk Series for colt and gelding trotters in addition to the second round of the Blossom Series for filly pacers

Cold Certified was much the best in his $20,000 division of the Tie Silk Series, winning in a career-best clocking of 1:57.2 for driver Jason Brewer. The gelding tucked into the three-hole while White Russian marched to the top and sliced out an opening quarter in a :28-second clip. Brewer brushed Cold Certified to the top in the backstretch, and the son of Kadabra-I Like Stephanie zipped through middle panels of :58.2 and 1:27.3 before using a :29.4 final frame to seal the deal. White Russian was 2-1/4 lengths back in second, with Fore Seasons a distant third.

The youngster, who went 1-1-0 in two starts during his freshman season for owner/trainer Gary Lance of Port Perry, ON, bumped his lifetime earnings to $20,625 with the victory.

Midfield Magic toyed with the competition in the second division, winning in a time of 1:57.4 for driver Rick Zeron. The gelding got away second behind Dohini Surfer, who supplied a :28.2 opener to the group of nine. Zeron gave his charge marching orders as the field entered the backstretch, and in a matter of strides Midfield Magic was in charge of the tempo. He laid down intervals of :58.1 and 1:27.3 before cruising home in :30.1 to win by 3-3/4 lengths over Cimeronken. Third prize went to O U Sexy Guy.

Frank O’Reilly trains the son of Kadabra-Midori Hanover, who was making his 2012 debut, for the partnership of Franco Cianci, Isidoro Russo, Vincenzo Monticciolo and John Fielding. The three-time winner upped his lifetime earnings to $37,360 with the winning effort.

Back To Peace won as the 2-1 favourite in the final division for the tandem of driver Jack Moiseyev and trainer Frank Colville. The gelding, who was making just his second start of the season, halted the clock in a career-best clocking of 1:58.4.

Touchdown Toss made the early lead and zipped the field by the quarter pole in :28.3 before overtaken in the backstretch by the pocket-sitting Back To Peace. That one cleared to the position of command in a matter of strides and proceeded to supply middle splits of :59.4 and 1:29.4 before using a :29-second kicker to seal the deal over Boca Boca and Touchdown Toss.

The gelded son of Angus Hall-Anna Stella is owned by High Stakes Inc of Moffat and Antonio Chiaravalle of Hamilton, Ont. The victory was his first of the season and the second of his career. His bankroll now sits at $35,130.

Yagonnakissmeornot disappointed an army of backers in last week’s opening round of the Blossom Series, but she rebounded with an eye-catching score in tonight’s second-leg assignment. The daughter of The Panderosa-Artstopper made a costly break last week and had to settle for second prize, but Jody Jamieson handled her differently and she responded in Thursday’s follow-up effort.

George Teague JR Inc, Ted Gewertz and Fannin Racing LLC share ownership on the six-time winner, who improved her 2012 record to 4-1-0 in five tries with the victory. The $15,000 payday helped her lift her lifetime earnings to $89,496.

Teague and Jamieson also clicked in the second division thanks to a solid performance from Arm In Arm, who turned a two-hole trip into a 10-1 upset in a career-best clocking of 1:53.3. Air Guitar Hanover, who was on the hook for fractions of :26.3, :54.4 and 1:23.3, was pestered by the parked out Jamie Sue for most of the mile. She put away that foe around the final turn, but she couldn’t fend off the pocket-sitting Arm In Arm who used a :29.4 closing quarter to post the win. Air Guitar was second, with Machleen finishing third.

The daughter of American Ideal-Arm In Arm, who is owned by George Teague JR Inc, Ted Gewertz and Fannin Racing LLC, won for the first time this season and for the second time in her career. She has stashed away $28,427 to date.