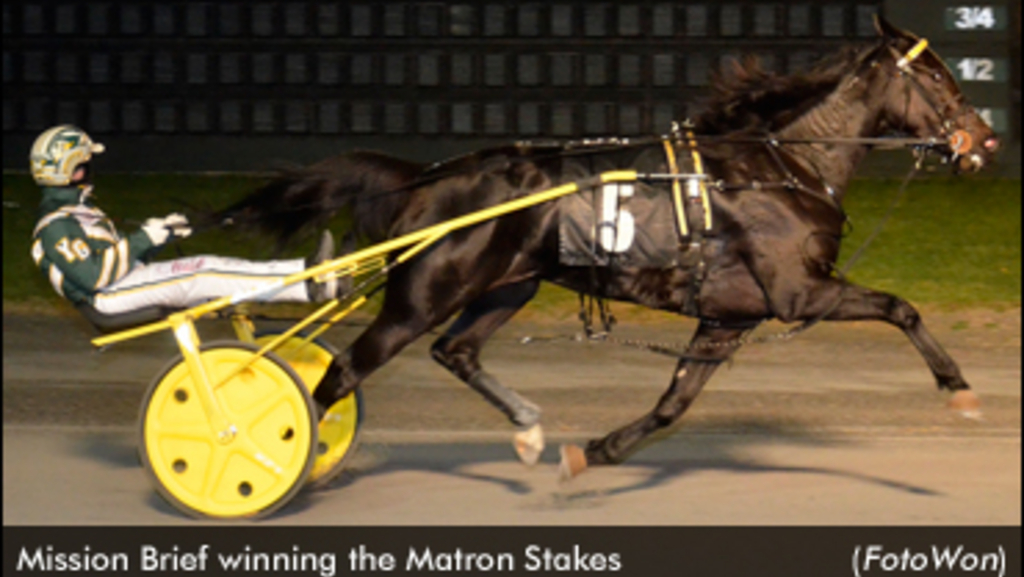 The connections of Mission Brief have announced that the star four-year-old trotting mare will not race this season due to injury.

Trainer Ron Burke told Trot Insider that she was being watched while training last week when she took a funny step, and upon observation some swelling was found after the misstep. The injury is not considered career-threatening by any means and Burke expects a full recovery.

"She can easily come back from it; that's not a concern for me," said Burke. "If it was a normal horse you could possibly have shoved on and tried, but that's not what she deserves."

In harness racing circles, many feel and have stated that the three- to four-year-old transition year to aged competition can prove to be difficult. Of course, Mission Brief isn't an ordinary racehorse. But even Burke admits that if there was a year for this superstar to be sidelined, this would be the one he -- and many others -- would choose.

"We just said let's not try, let's call it a year," continued Burke. "Obviously it's not what we had in mind and not what we planned. It is what it is....they're not machines and things go wrong."

Mark Weaver, whose Weaver Bruscemi LLC shares ownership of Mission Brief , told harnessracing.com that there were also a few offers on the table to sell the daughter of Muscle Hill, which have also now all been declined.

"We considered selling her as a broodmare but after talking it over with all the owners, Ronnie (Burke) and the vet, it's almost certain she will be back to 100 per cent. If it was 50-50 that she would come back we would probably sell her as a broodmare, but we've had other horses with similar injuries who came back to their old self.

"We were seriously considering selling her for a lot of money, more than any broodmare had ever been sold for. But at the end of the day, she's such a special individual and we've had so much success with some other ones, we decided to hold onto her and give her enough time and race her next year, here and/or overseas."

Owned by Weaver Bruscemi, Burke Racing Stable, Our Horse Cents Stable and J&T Silva Stables, Mission Brief has 19 wins and three seconds in 27 career starts with $1,599,587 in earnings. At two her nine victories included the $352,050 Merrie Annabelle and $500,000 Breeders Crown on her way to divisional honors. Last year at three her 10 wins included the $307,040 Elegantimage, $185,000 Zweig Filly and $174,000 Moni Maker while repeating divisional accolades. She also raced against her male peers in the Hambletonian, capturing her elimination before finishing second in the $1 million final.

"She probably could have been ready for the TVG and Breeders Crown (in late fall), but we're not going to even make the stakes payments this year and give her necessary time off to do right by her," concluded Weaver. "I think the ultimate goal is the Elitlopp next year, but it's hard to look even a week ahead. We think she can be a tremendous broodmare when the time comes, but we don't think her racing days are over."