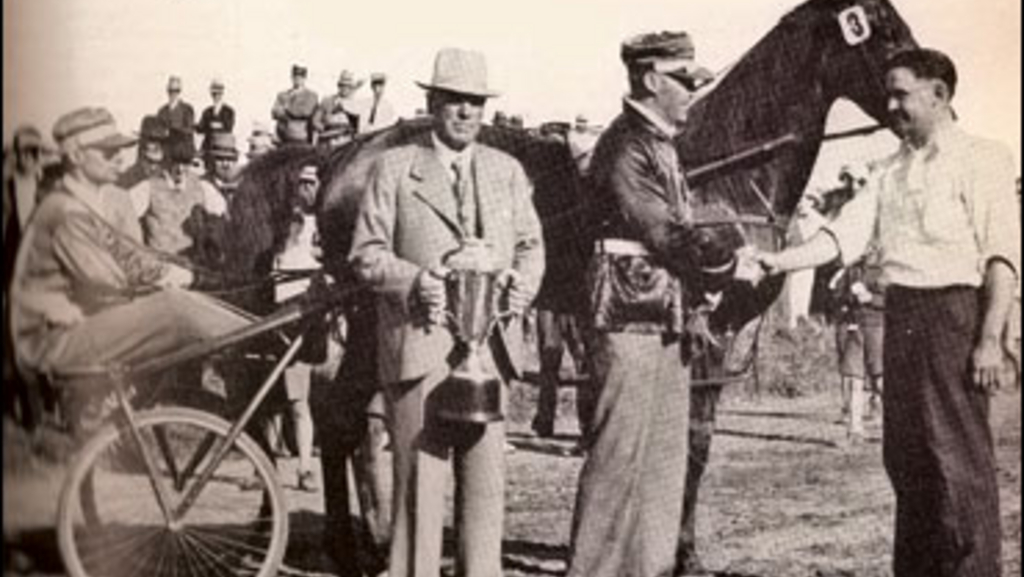 March 1930: The latest issue of "Wallace's Year Book" in hard cover format has just been mailed out to subscribers. Within its over 400 pages is listed some of the pertinent statistics for the 1929 racing season as well as a wealth of breeding statistics. It does not include results of individual races but may in future. Of particular interest are the two lists of Standard record trotters and pacers. In order to be included on this list for Trotters, a horse must have attained a record of 2:25 or better (2:30 or better if three-year-olds and under) at an officially reported meeting in 1929. For pacers the standard applied is 2:20 or better; 2:25 or better if three years old or under. The list covers some 42 pages for trotters and an additional 47 pages for the diagonal gait. Many of the listed horses attained their records at Canadian tracks. I could not help but notice a horse named Derby Dan, bred by Robert Dezell of Owen Sound who took a record of 2:12 1/4 Oct. 4, 1929 at Leamington, Ont.

August 20-22, 1935: Racing under the authority of The National Trotting Association, the committee at Charlottetown staged a very well organized three-day event in front of large crowds each day as part of Old Home Week. Horses representing three Maritime provinces won races during the meet. The most impressive performance of the entire meeting had to be the three straight heat win by Tollgate owned by the partnership of Sweeney & Verge of Bridgewater N.S. in the Free For All Trot & Pace for a $500 purse. The veteran gelding paced two identical heats in 2:08 3/4. Mr. Heber Sweeney is the mayor of Bridgewater and undoubtedly closed his office for the occasion as he does the driving. Also a notable effort was recorded by Leta Kalmuck, a three- year-old filly owned by Willard Kelly of Charlottetown, taking all three of her heats with a best score of 2:22. A glimpse of future stars was shown when a field of eight two year olds went postward with Hi-Sox taking two heats for Geo. F. McDowell of Summerside. Another day of harness racing will be held at this track in late September at which time most of these same horses will return.

1936 - Hodgins Wins At Orangeville Despite A Broken Arm

July 1, 1936 - Driver Clint Hodgins refused to let a broken arm get in the way of his driving assignments and showed the fans in Orangeville he could do it "one handed". Owners Jos. T. Saint and his son Fred of Wallaceburg, owners of winning horse Lee Counterpart, almost had to seek a replacement driver when Hodgins was recently injured. However, a makeshift elongated hand hold was contrived and the young reinsman was equal to the task despite a cast on his left arm. The Three-Year-Old Pace sponsored by the local legendary veterinarian Dr. W. H. Riddell is one of the top events of the early season. Racing for a purse of $500 the three-year-old gelding won the first two heats and finished second in the third. Two full days of racing were held with 12 heats each day and a couple of entrants raced three times each day.

August 2, 1937 - Even veteran observers at this Eastern Ontario track cannot recall a better day of racing in recent memory. The racing strip was in excellent condition and as proof, the track record which had stood for some 16 years was lowered today. The pacer Tramp Abbe was timed in 2:08 flat in the second heat of the 2:16 class thus breaking the long standing record previously set by Romala in 1921. The fleet pacer is owned by Mr. L. G. Bennett of Port Hope and handled by Steadman Craig, one of the most talented reinsmen in these parts and certainly well known throughout the province. This record is even more remarkable when it is taken into account that the track is acknowledged as being 45 feet "long". Unfortunately in the third and final heat the horse fell, thus eliminating any further chance at again reducing the speed tab. A large crowd was on hand to enjoy the day's festivities.

January 1939 - The Hanover Shoe Farm, located at Hanover, Pennsylvania, has listed their stallion lineup for the upcoming breeding season. Their previous top producer Sandy Flash 2:14 1/4 was recently exported to Sweden and in his place will be a full brother Lawrence Hanover.

From July 1968 USTA Hoof Beats.
A republication of a John Hervey article.
About the first one of note was that of the Canadian gelding Harold H. 2:031/4. A contemporary of Dan Patch and Prince Alert, he possessed flying speed, was beautifully gaited (barring the pyjamas), game, consistent and raced brilliantly. Bob Carnathan then had him. His owners got the idea that he could beat even Dan or the Prince. They were also great admirers of Mr. Geers and wanted him to take the gelding into his stable and race him. But-the G. O. M. would have nothing to do with hobbled horses. But, after talking the matter over, he consented to take Harold H. and teach him to go without "the tanglers"-it being thought that a successful job was possible. So "Pop" tackled the job. He spent all one fall, winter and spring on the reformation process and by so doing got Harold to the point where he could race his heats below 2:05 free-legged. But of course that was not good enough. And, while he behaved well, he lacked the "whiz" he had formerly possessed, while when it came to a hard finish against very fast horses, he would weaken. ... The fact is that he was all the while being asked to do something that had become unnatural to him and, while giving the best he had, was wanting something to help him which was no longer there.

from April 22, 1936 Harness Horse and Deppicting Dan Patch Pt II, by John Hervey:
Lexington and Memphis, in each case a $3,000 stake. It was predicted that when he got to Memphis he would meet his Waterloo, as there he would have to race the Canadian gelding Harold H. 2:041/4 that had been doing sensational things and was claimed able to pace in 2:02. When they clashed, Dan Patch literally broke Harold H.'s heart in going a quarter of a mile and won pulled up.
The Canadians had not been satisfied with the way Dan Patch had smashed Harold H. up, at Memphis and wanted another chance. So a match was made for the two at Windsor as Dan's debut in 1902. The outcome was the same: the Canadian gelding was so badly whipped that he looked ridiculous. Then Dan went to Detroit where he was to meet the great Searchlight 2:031/4, Connor 2:041/4, etc. He beat them without having to beat 2:05-and made them look foolish. The next week he paced his last race, at Cleveland, duplicating his Detroit performance and going in 2:033/4 as if it were just a jog.
---------------
from April 17, 1930 Trotter and Pacer magazine; Western Canada Protests:
The light harness horse has been a great advertisement to the west, some of the most famous horses in history have been bred and raised in the western provinces; they have carried the colors of the west all over this continent and made the names of their home towns famous. I am sure I could inspire thousands by some reference to the great speed battles of Harry O., Democracy and Ione; later Harold H. broke the Canadian record at Winnipeg and it stood for ten years.

Harold H, a great Canadian gelding owned and bred by G.H. Leatherdale of Dresden, Ontario, had a lifetime record better than anything Dan Patch had ever recorded up to that point. Experienced horsemen predicted the great Dan Patch would meet his match on that October day in Tennessee. They were wrong. Dan Patch disposed of Harold H. in three straight heats to win the lion’s share of the $3,000 prize. A year later he would beat the Canadian on his own soil, easily winning two heats of a match race at Windsor. From that point on, Dan Patch never lost a race, mostly because nobody would race him. In a time trial in 1906, at the age of 10, Dan Patch paced a mile in 1:55. The time was eventually disallowed because the pacesetter was deemed ineligible, but nobody disputed Dan Patch as one of the greatest horses of all time.

In reply to I've really enjoyed reading by Lynne Magee

Thank you Lynne Magee for

Thank you Lynne Magee for reading Rewind and for your interesting comments about the course you are taking . Unfortunately I cannot give you any further information on Harold H but he must have been pretty good . As a young boy I recall hearing a story told about a very elderly gentleman who lived in our general rural neighbourhood .He never owned or drove a car and seldom left home .However one of the few times he had ever ventured very far was to see Dan Patch race.Just how far he had to travel I am not sure, but he must have thought it was pretty important .

I've really enjoyed reading Robert Smith's stories from the past. I just completed a paper for my University of Guelph online course (The Equine Industry)which was about Dan Patch and his owners. In my research, I found that Harold H, a horse of some distinction in the early 1900's raced against Dan Patch and was considered to be a favourite. Of course, he didn't beat the unbeatable Dan Patch. I am trying to find information about Harold H as he was from my area of Wingham, Ontario and am wondering if Mr. Smith know's anything about this horse?