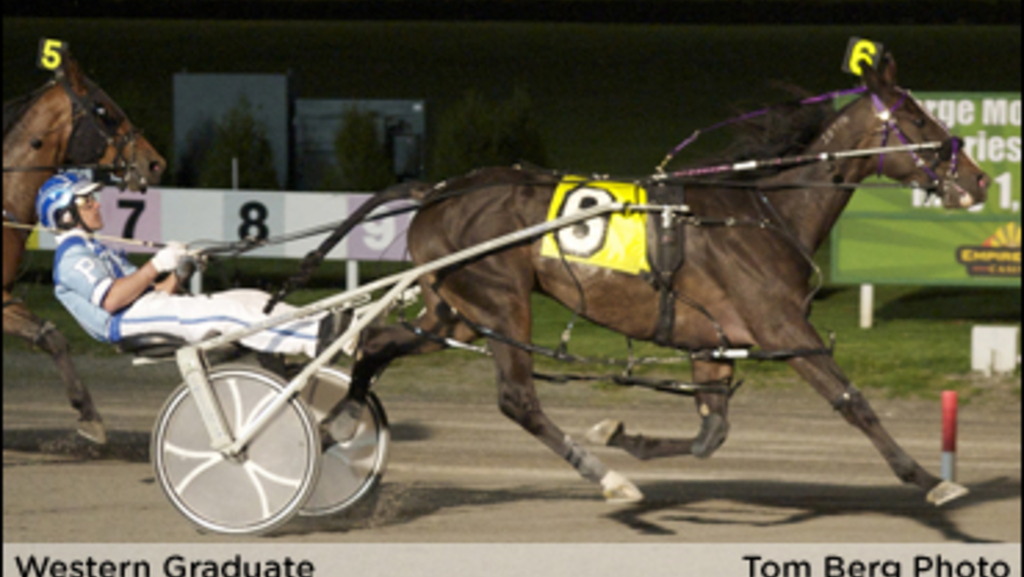 Western Graduate (Jim Pantaleano), leaving from outside her five rivals, methodically moved first-up from fifth. She went after Headpoles R Us (Greg Grismore) as that one led through intervals of :28.1, :57.3 and 1:25.2. Western Graduate had advanced to second turning for home, but she was not about to settle for being the bridesmaid.

Western Graduate edged away through the stretch, defeated pocket-sitting, 6-5 choice Chris Cross (Jeff Gregory), by a length-and-a-half in 1:54.3. "Headpoles" faded to third.

For Western Graduate, a six-year-old daughter of Western Hanover owned by KDM Stables and trained by Lou Pena, she returned $5.50 (second choice) for her third victory (second consecutive) in 15 seasonal starts. The exacta paid $10.60, with the triple returning $35.60. It was her 38th career win in 123 starts, with earnings now at $1,015,907.

Leaving from post No. 3 after an inside defection, Master Pine (Jason Bartlett) stole a minute half. He then threw in a :56.3 back portion to keep the closers at bay. Master Pine, with three lengths to play with turning for home, defeated 4-5 favourite Victors Vicky (Cat Manzi) by 4-1/4 lengths. Bet To Win (Brent Holland) was third.

For Master Pine, a seven-year-old Mater Lavec gelding trained by Julie Miller for co-owners Mark Moger and Albert Delia Jr., he paid $8.10 (second choice) for his fifth win in 10 seasonal starts. The exacta paid $17.60, while the triple was cancelled (short field).

Special props to Shoeless White Sox (Gregory), whose 1:55.2 effort in the $20,000, second-race trot not only was a new track record under the category of "aged trotting horse," but also tied Garth Vader's North American record for aged trotting horses on a half mile track.

The five-year-old son of Mr. Lavec was trained by Mark Harder for owner Chris Alexander.