A House Of Harness Racing

Like so many others involved in harness racing, horseman Lorne House was born and raised into the business.

“Indeed I grew up in it,” said House. “My Dad, Mike House, had horses and my Grandfather, Alf Smith, he raced horses too.”

House has been in Ontario's harness racing industry for 20 years as a licensed harness trainer and driver. His first career training win came at Western Fair with Fluid Drive, on November 4, 1999.

“He was the first horse I ever owned too,” said House. “Don McElroy would have drove him and many others for me back then. I just didn’t have the itch to drive at that time.”

That itch would indeed come along a few years later, when House would get in the majority of his qualifying drives at The Raceway during the Spring of 2001. That Septemeber, House guided Tinkers Magic to an off-the-pace win at Hiawatha Horse Park for his first career driving victory. Fantastic Lil gave Lorne his first driving win at Western Fair in early 2003. The pair would double up, next start at Flamboro, before that same mare would get claimed.

“The guy that claimed her, well I guess he didn’t like her...He called me to see if I wanted her back, not long after, but I turned him down.”

House was quick to name Grogan as one of his favourites over the years at The Raceway.

“Grogan was a nice, nice trotter I trained and drove...I still remember the day he won an O.S.S. Grassroots in London (June 19, 2007). The track was sloppy and we won by 11 in 2:00 flat! If the track would have been fast, that day, we’d have broke the track record I’m sure,” stated House. “He’s retired now and I believe he’s breeding Dutch Warmblood mares in Indiana.

“Kendal Gustav was another great horse to drive,” continued House. “I had lots of thrills aboard him. He was just so consistent and when it was time to go, it’s like he just knew and he’d show up...I could always count on ‘Gus’.”

A very interesting question came up recently during the COSA TV interview featuring driving legends John Campbell, Bill O'Donnell and Ron Waples. Broadcast host Greg Blanchard asked the gentlemen if there was ever a horse they never had a chance to drive, but wish they could have. They all quickly agreed on Niatross as that one horse they wished they could have drove in a big race.

House was asked that same question, and his answer may surprise some. “The Beach (Somebeachsomewhere) would be the dream horse and an obvious choice for many, I’m sure, but I’ve always liked the hard-knocking older horses...the blue-collar types, so Admirals Express would likely be that one horse for me.” 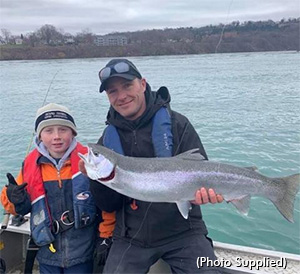 Outside of harness racing House is a big Toronto Blue Jays fan and he loves to fish as well.

“I do miss seeing the Jays play and my boy (Luc) loves the baseball too, but he’s not a Jays fan just yet though,” he laughed. “The fishing I picked up from my Grandfather years ago. We’d get out lots, and now it’s been Luc and I getting out.”

At just eight years of age, Luc would come up big recently in a father-son fishing excursion on the Niagara River around Queenston.

“We’d never fished there before, but away we went last Friday (March 27). We weren’t there 15 minutes and Luc hooked on to a 12-pound rainbow (trout). And he wouldn’t need any help from me, though he was getting tired into the stretch, but he dug in and landed him,” House chuckled. “It was a very proud moment for us both and he was grinning from ear to ear.

“We’d end up catching 13 that day and he’d catch eight of them,” Lorne continued. “I always loved fishing with my Dad and Grandpa. So my boy Luc, I guess he gets it honest enough!”

Like his Dad, Luc enjoys the horses too. Sitting alongside Lorne at The Raceway in 2017, Luc would guide Ping to an exhibition pony race victory. “Now that was fun! Just for him alone...he was ecstatic. And we still have Ping too...she looks after the yearlings on the farm.” 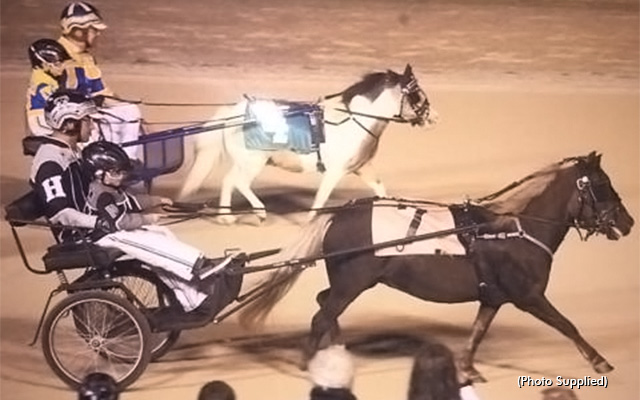 House, like many, is eager to return to racing when the time comes.

“We’ve been quite busy training and I look after the track at Dorchester Downs,” he noted. “Angela (Clark) has been training Munndutch back under saddle, but we’ll have him back in the bike when racing returns. We’re just hoping to get back to racing soon and preferably in London. There’s no doubt we’ll be ready to race when and where the tracks are open.”

(Shannon 'Sugar' Doyle for The Raceway)