Harrah's Philadelphia opened its eleventh season of harness racing on Sunday, April 2 with moderate temperatures, an abundance of sun, and a brand new wager.

The 50-cent Pick 5 was added to this year's wagering menu. The multi-race bet will start in Race 6 every live card. Like the Pick 4, it boasts a low takeout of just 15 per cent. The 50-cent Pick 4 sequence will now begin in Race 2.

2016 leading trainer Ron Burke got off to a fast beginning by striking pay dirt with the nine-year-old gelding Eastend Eddie (driven by Yannick Gingras) in the meet's opener. The class dropper stalked the leader until the top of the stretch, where he powered by in a time of 1:53 for owners Weaver Bruscemi and Burke Racing. It was his 33rd career win, with earnings just under $440,000. 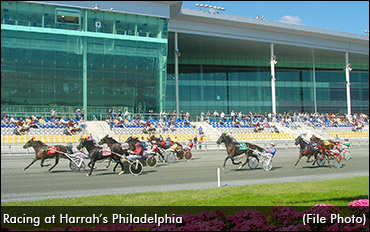 The Burke/Gingras duo would team up again in the featured event of the day, a pace for non-winners of $20,000 in their last five starts. This time, it was Validus Deo getting the call. The seven-year-old gelding by Lis Mara-Madam Countess made the top early before yielding to the speed of Arque Hanover (Corey Callahan) just beyond the quarter. He would gradually wear down his foe and went on to complete his mile in 1:51, a seasonal best. Validus Deo is owned by Burke Racing, Weaver Bruscemi, and Jerry and Theresa Silva. He paid $8.40. It was one of three total wins on the card for Yannick Gingras. Tim Tetrick also had three wins, while David Miller, Brett Miller, and 2016 meet leader George Napolitano Jr. each had two victories.

The fastest mile of the day came in the final race, as Sal Vumbaca's Late Night Joke (Napolitano Jr.) won a thrilling stretch battle with Davids Dream (Brett Miller) in a non-Winners $2,500 last five event. The time of the mile was clocked in 1:50.2, a lifetime's best for the winner. A few races before, veteran pacer Casimir Jitterbug stopped the clock in 1:50.3 for owners Bellino and Sons LLC, trainer Andrew Harris, and Driver George Napolitano Jr. The biggest price of the afternoon was Elrama N's surprise victory in Race 8. Driver Corey Callahan showed off his driving skills by weaving through traffic in the late stages after a ground saving journey, prompting a $34.40 win payoff, and an uncovered superfecta.

Live racing returns on Thursday, April 6, with a first post of 12:40 p.m. Harrah's Philly will then begin its regular schedule of four-day a week racing every Sunday, Wednesday, Thursday, and Friday, with the 12:40 p.m. (Eastern) start time.