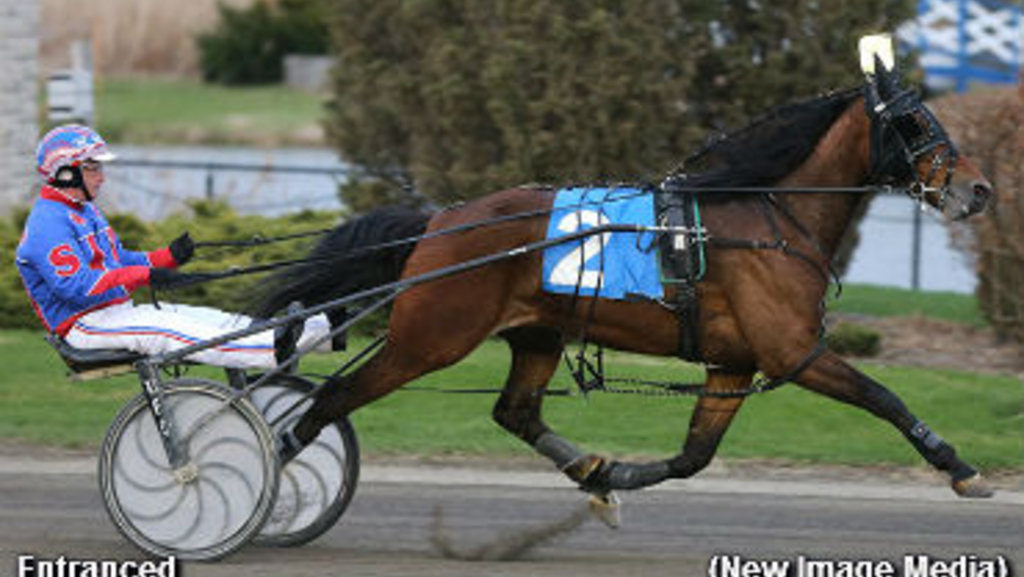 There could be a sweep of this year’s Tie Silk Series if Entranced’s performance in the final mirrors the way he’s raced in the preliminary legs.

The speedy son of Kadabra-Purple Haze, who roared to a 1:54.2 in last Monday’s opening leg assignment, won handily Monday evening at Woodbine Racetrack for driver Mike Saftic. The 3-5 favourite won impressively in 1:56.4.

Saftic hustled Entranced to the lead from Post 2 and successfully sliced out splits of :27, :58 and 1:28.3 before rocketing home in :28.1 to seal the deal by 2-1/2 lengths over Musical Spell. Third prize went to a rallying Verdi.

Trainer Garth Gordon co-owns the gelding with partners Gary Green and Bernard Tobin. It was the third lifetime score in just nine trips to the track for the career winner of $36,000. He paid $3.50 to win.

The Muscler also won a game of “Catch me if you can” in the first division for trainer/driver Dustin Jones.

Sent off as the 5-2 second choice in the wagering, The Muscler won for the third time in six starts this season. Dustin Jones Stables Inc of Waterdown, Ontario owns the lightly-raced square gaiter who pushed his lifetime earnings to $20,940 with the win. He paid $7.70.

The Jackpot Hi 5 wager continues to be a hot topic of conversation among handicappers, and it will be more of the same when harness racing returns to Woodbine Racetrack on Thursday evening.

There were multiple winning tickets sold on the combination of 8-7-4-3-9 during Monday evening’s card, and as a result a staggering carryover of $412,346.50 will spill into Thursday’s pool.

Einsteins Best rallied from out of the clouds to prevail as the 6-5 favourite in Monday’s finale, with Cluster Hanover (4-1), Glory Beach (41-1), OK Galahad (104-1) and P L Haymaker (46-1) rounding out the top five finishers that made up the winning combination. A $1-based wager on Monday’s Jackpot Hi 5 earned handicappers a return of $8,281.05.