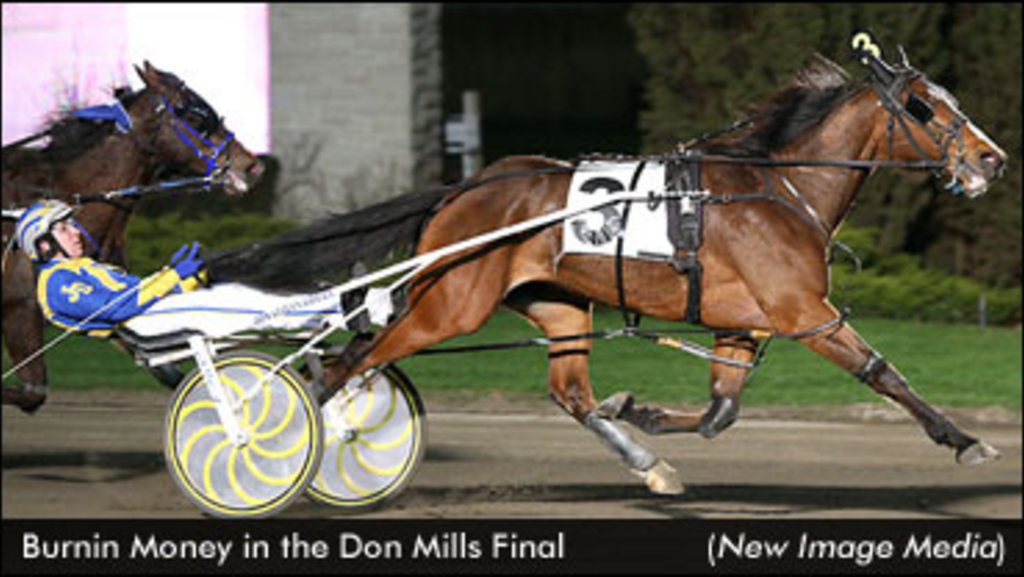 One More Ginny and Burnin Money turned in a pair of dazzling record performances in their respective series finals on Saturday evening at Woodbine Racetrack.

One More Ginny, driven by Mario Baillargeon, powered home to a Lifetime Dream Trotting Series record of 1:54.1 in the $43,000 final.

When the wings of the gate folded in the first series final on the program, three horses set out for the early lead into the first turn. One More Ginny, Sheer Glide (Rick Zeron), and Kendra Hanover (Simon Allard) were three-wide for most of the :27.1 opening quarter. But Sheer Glide eventually cleared to command past the quarter pole ahead of One More Ginny while Kendra Hanover ducked into the three-hole.

One More Ginny didn't sit in the pocket long though as Baillargeon sent her to the top down the backstretch. The 7-5 favourite cleared to command at the :56.3 half-mile mark and proceeded to lead the field of 10 to three-quarters in 1:26 with Majestic Taglet (Mike Saftic) advancing first over. But One More Ginny turned back that challenger into the stretch and opened up three lengths before hitting the wire. Sheer Glide finished second and Onthemoneyside (Sylvain Filion) came on for third.

One More Ginny destroyed the series record of 1:55.3, set by PJs Photo in the 2011 edition. The Angus Hall-Oaklea Ginny mare, who won her four-year-old debut in the second leg of the series last week, paid $4.80 to win.

Ben Baillargeon trains One More Ginny for Kor Stable Limited of Guelph, Ont. The victory was the mare's seventh in 21 career starts and boosted her bankroll to $194,058.

“I knew she would be tough to beat tonight,” Mario Baillargeon told WEG Communications Department following the win. “There’s just no end to her. For a four-year-old, she’s very lightly raced and she has a great size, gait and manners. I wouldn’t be surprised if she trots in [1]:52 this summer at Mohawk. She’s definitely a Grand Circuit mare and both Ben and I are expecting big things from her.”

Burnin Money later completed a sweep of the Don Mills Trotting Series with a record 1:52.4 triumph in the $44,000 final with Jonathan Drury in the sulky.

Burnin Money settled away mid-pack in the 10-horse field while Guiltywithanexcuse (Paul MacDonell) fired to command from post eight and put up a :27.1 opening panel. Holy Halibut (Sylvain Filion) pulled the pocket down the backstretch, but quickly decided against that move and slide back along the pylons with Guiltywithanexcuse showing the way to the half in :56.1.

Nowucit Nowudont (Scott Zeron) made the first over sacrifice from fourth in the third panel with Burnin Money following suit. Nowucit Nowudont rolled up alongside the leader at the 1:24.4 third quarter mark and put him away into the stretch, but Burnin Money came charging up off cover to score by one and a half lengths in a career-best 1:52.4 to destroy Afternoon Dreams' 1:55.1 stakes record, which was set in 2009. Nowucit Nowudont finished second and Holy Halibut was third.

“The trip couldn’t have worked out any better,” said Drury. “I was following Scotty [Zeron] and he took me to the top of the stretch and my horses did the rest. I had a big hold on him around the final turn and I felt pretty optimistic we’d get the job done.”

The five-year-old Cash Hall gelding was plucked from a $15,000 claiming race last fall by Wheelhouse Racing Stable of Mississauga, Ont. and has climbed up the conditioned ranks while in the hands of trainer Carmen Auciello.

Burnin Money now boasts a seasonal record reading 7-1-3 in 13 starts with $109,760 earned in purses and has been paid into the Maple Leaf Trot this summer. The win was his 15th lifetime and pushed his earnings to $190,136.