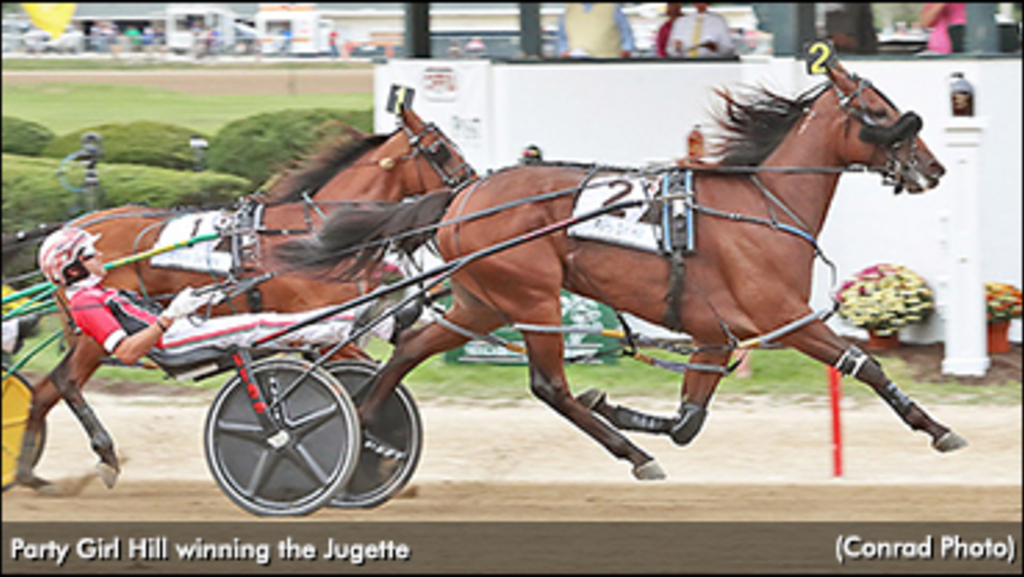 Party Girl Hill, the world-record-setting 2020 Dan Patch Award winner for best three-year-old pacing female, has been retired because of an injury discovered after training this past weekend.

Chris Ryder, who trained the mare for breeder-owner Tom Hill, said Party Girl Hill was nearly ready to qualify in preparation for her four-year-old campaign.

“We’re all devastated,” Ryder said Monday. “She had been training back terrific. It’s just a shame; a shame for her and a shame for us not to be able to see what she could do as an aged horse. It’s a real loss. She was so special.”

Unraced at age two, Party Girl Hill won 15 of 16 races last year and $880,345. Her victories included the Fan Hanover, Jugette, Matron, Pennsylvania Sire Stakes championship, and a division of the Tattersalls Pace, when she became only the second pacing filly to beat male rivals in a race worth at least $100,000 in the last 30 years. She was driven primarily by Dexter Dunn, with Doug McNair in the sulky for her Canadian starts in the Fan Hanover.

In the Jugette, Party Girl Hill won her elimination in 1:49.3, the first sub-1:50 mile on a half-mile track by a female pacer in history, and returned to capture the same-day final by three-and-a-half lengths in 1:50.3 at the Delaware County Fairgrounds in central Ohio.

Following the Jugette, owner Hill described the daughter of Captaintreacherous-Look Cheap as “a Rolls-Royce with hair.”

Said Ryder on Monday, “If you had to pick out one performance from last year, maybe you would say the first heat of the Jugette. But that was just part of a wicked stretch of five or six races for her, where she went to Canada, Pennsylvania, Ohio, and Lexington and raced great.”

What made Party Girl Hill great?

“She had no weakness,” Ryder said. “She had super speed. She was just fast, like ‘right now’ quick. And she had a great attitude. Even now, she’s happy. She has her ears up, she’s not sulking.

“I want to thank everyone who worked with her, all her fans, and Tom. It was special to have a horse like her.”

It's a real shame for

It's a real shame for something like that to happen. I think Party Girl Hill would have been the best returning 4yo pacer of either sex in 2021, since she took on and beat the boys last year. If the Mohawk Million was a race for older pacers rather than one for 2yo trotters, (as I have proposed many times) I don't think there's any doubt that her connections would have entered her in the event.