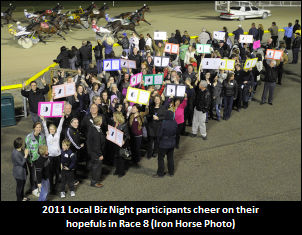 The sold-out dinner event saw more than 200 people from 39 local businesses paired with a horse in Race 8. Tobruk, in rein to Bob McClure, conquered the field and lit up the tote board as he returned $108.30 for a successful Win wager.

Tobruk’s Local Biz Night connections received a trophy to display in their workplace and an equal share of a staff party for 20 at Grand River Raceway.

Local Biz Night is a joint effort between the raceway, the OLG Slots at Grand River Raceway and the Centre Wellington Chamber of Commerce.

All photos from the evening are available in a public gallery on Grand River Raceway’s Facebook page.

Hometown favourite Doug McNair scored three wins on the card with Tax Riteoff (Race 2), Kid Carson (Race 4) and Southern Watch (Race 12). McNair will be officially recognized as the 2010 Top Dash Driver at Grand River Raceway — alongside 12 other top performers — during the track’s May 2 broadcast.

Racing will continue at the Elora, Ont. oval on Mondays and Wednesdays at 7:15 p.m. Friday night racing will be added to the mix starting June 3.