Top Me Off Completes Weiss Sweep

The Bar Hopping ridgling Top Me Off completed a “sweep” of his Bobby Weiss Trotting Series action for males, adding the $40,000 Championship on Sunday (April 25) to his three preliminary wins at The Downs at Mohegan Sun Pocono with a 1:54.4 score.

Trainer Todd Schadel had guided Top Me Off to the prelim wins, but he turned to driver Andy Miller to handle the three-year-old in the final. Their horse had drawn post 9 for the Championship, but even before the race they had luck, with a rival scratching and thus letting them start just a bit more inside. 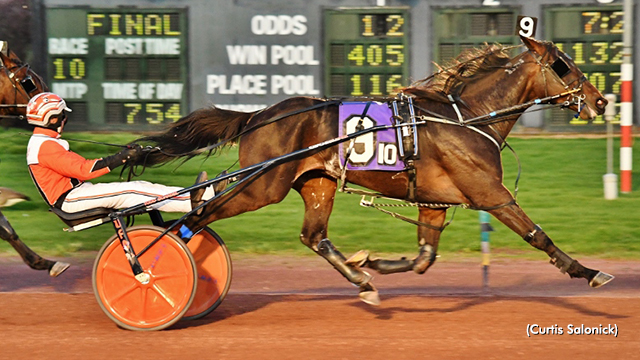 Top Me Off nonetheless covered a good deal of wide ground to make the lead by a :28.2 quarter. Things were well in control after that point, with middle fractions of :57.3 and 1:26 leaving the sophomore with plenty left in the tank and able to leave the opposition safely behind. Top Me Off is now undefeated in five starts this season while raising his career bankroll to $107,348 for the ownership of Todd and Chrsine Schadel and Rick and Regina Beinhauer.

In the $17,500 Weiss consolation for this classification, the Southwind Frank colt Tart Tongue broke his maiden in style with a 1:56.1 victory. Brian Sears sent the heavy favourite to the lead nearing the :28.4 quarter, rated the half to :59, then put in a pair of :28.3 quarters to win off by himself for trainer Marcus Melander and Stall TZ Inc.

The $40,000 Bobby Weiss Series Championships continue Monday afternoon (April 26) with the finale for the three-year-old pacing fillies. Incaseyoudidntknow was the only young distaff to go undefeated in her three preliminary contests, and she’ll be the likely choice starting from post 4 in the 10th-race feature. First-race post time for the Monday program is 12:30 p.m. (EDT). Program pages will be available at the PHHA website.