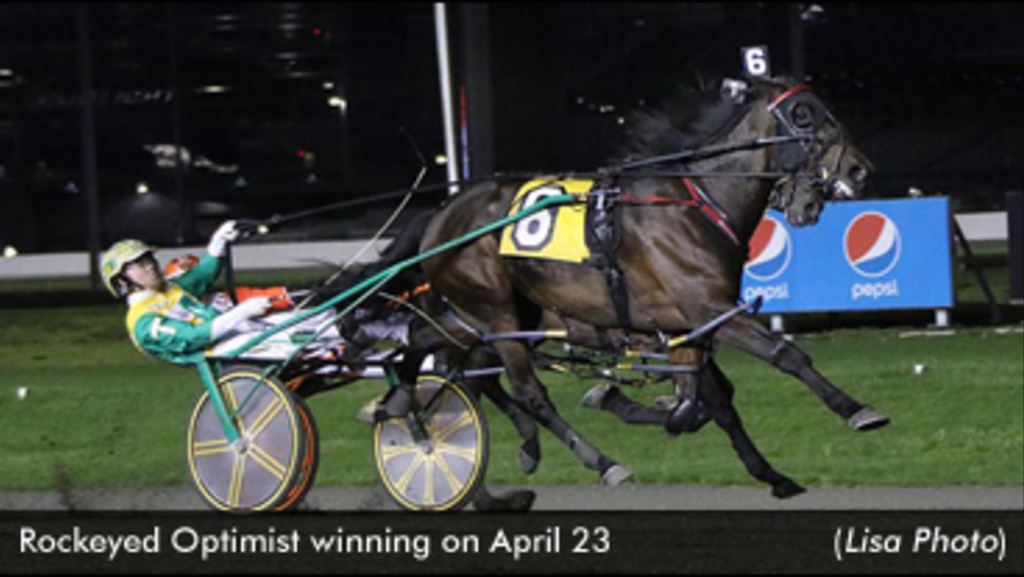 Rockeyed Optimist worked out an ideal close-to-the-action trip, wore down the leader in deep stretch and held on despite the explosive late charge of Always B Miki to take the $25,000 Open Handicap Pace at The Meadowlands Saturday night. McArdles Lightning was third.

Driver Tim Tetrick hustled the five-year-old gelded son of Rocknroll Hanover into the three-hole early behind McArdles Lightning and Atta Boy Dan. After an opening quarter of :27.2, Rockeyed Optimist, the 6-5 second choice, moved to the outside and began to grind away at the leader’s advantage at the half in :55.2.

By the time the stellar field reached three-quarters in 1:22.4, Rockeyed Optimist was up to the wheel of McArdles Lightning while 4-5 favourite Always B Miki, who had raced in a fourth-over flow, was dead last in the field of seven.

Rockeyed Optimist continued to inch his way closer to the top and finally got past the pacesetter with a sixteenth of a mile to go.

Up on the far outside came the airborne Always B Miki, who won all four of his starts a year ago in sub-1:50, pacing a sensational final quarter of :25.4 only to come up half a length short to Rockeyed Optimist in what was a superb seasonal debut.

The winner returned $4.40 to his backers, scoring for the sixth time in eight starts this year and went the mile in 1:50 for trainer Steve Elliott and owners Anthony Perretti, Virginia Berkner, A&B Stable and Joseph Battaglia.

Those hoping to hit the big one will have their chance on the next live race card as the 12th race 20-cent Jackpot Super High Five did not get hit again, upping the carryover to $194,741.03.