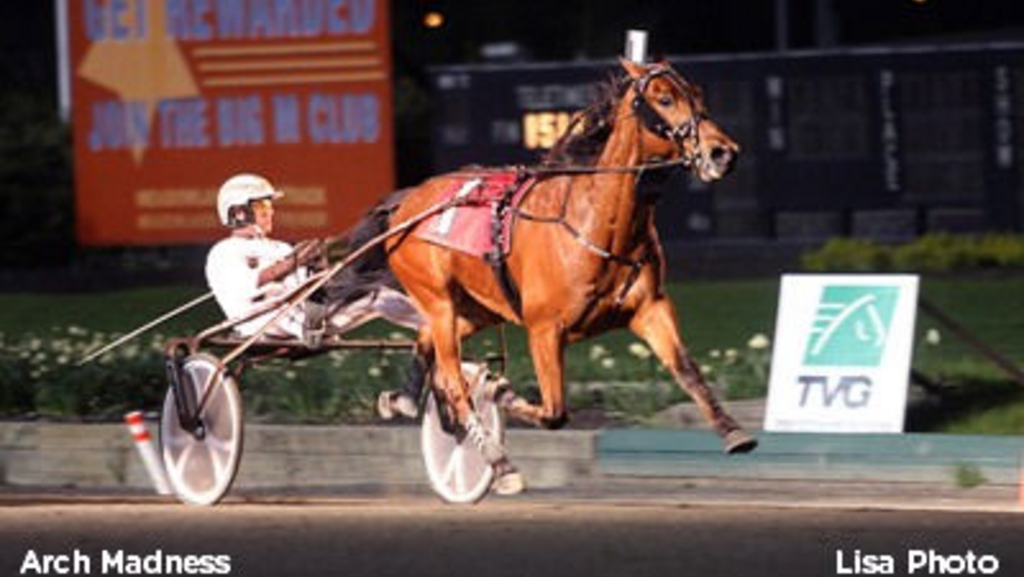 The Ontario-bred trotting titan Arch Madness held off a challenge from the favoured Four Starz Speed around the far turn and pulled away in the stretch to score his first victory of the year in the featured $31,500 Invitational Trot at the Meadowlands Racetrack on Friday

The five-year-old gelded son of Balanced Image, driven by Brian Sears, assumed the lead from Prayer I Am (John Campbell) midway down the backstretch through fractions of :28 and :55.1. After passing three-quarters in 1:23, the field entered the far turn where 6-5 favourite Four Starz Speed (Tim Tetrick) rushed up to challenge for the lead, but Arch Madness had plenty left to hold him off and pull away to a life’s best 1:51.4 win by three-quarters of a length. The time of the mile equals Arch Madness with Swan Image as the fastest performer sired by Balanced Image.

Prayer I Am rallied for the runner-up spot with Lets Get Serious N (Andy Miller) finishing third ahead of Four Starz Speed.

The 2008 Maple Lead Trot winner notched his first win in three starts this year. Arch Madness, who has compiled a record of 14-12-1 in 37 career starts, lifted his bankroll to over $1.7 million for trainer Trond Smedshammer and owners Marc Goldberg of Woodmere and Willow Pond LLC of Hewlett, New York.

In the following sixth race, North America Cup eligible Vertigo Hanover, who is rated at odds of 38-1 in Trot Magazine's 2009 Pepsi North America Cup Spring Book, rallied from off the pace to win his season debut in 1:52.3 by a neck for trainer Duane Marfisi and the Uncirculated Stable of Brantford, Ont. John Campbell guided the son of The Panderosa to his third lifetime score in eight starts.

NA Cup eligibles Pangiorno (Tim Tetrick) finished half a length back in fourth and Western Posse (Ron Pierce) was four lengths back in sixth in the nine-horse affair. Both are rated at odds of 60-1 in the Spring Book.