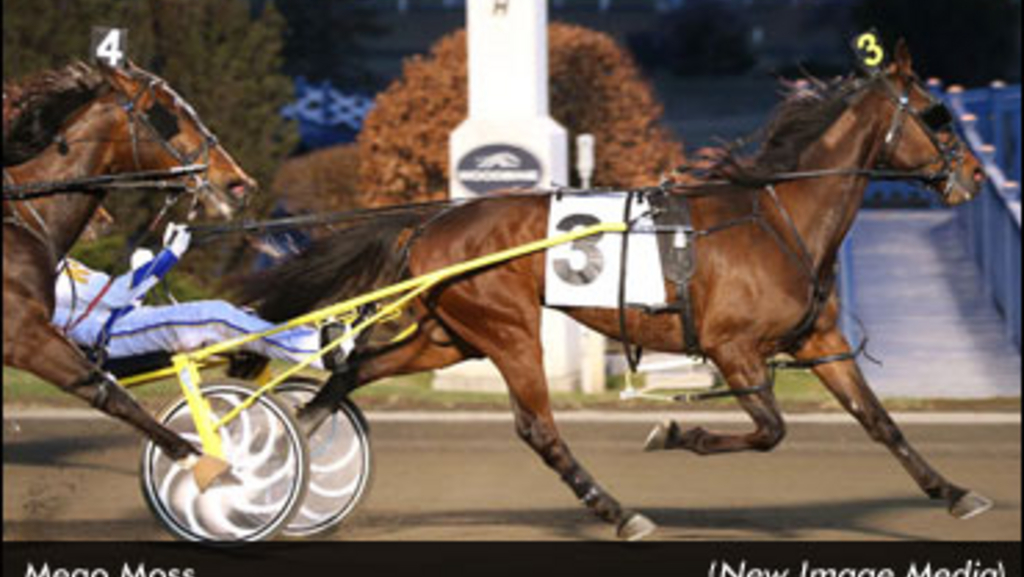 Mego Moss established a new Canadian season's trot record with a 1:52.4 triumph in the second leg of the Don Mills Series for catch-driver James MacDonald and trainer Carmen Auciello.

After a three-wide battle for the lead to the :27.3 opening quarter in the $18,000 event, Its Payday Friday (Mario Baillargeon) cleared over Mego Moss with 3-5 favourite Hldontghttoyurdrms (Jonathan Drury) parked and pressing to the half in :56.1. Hldontghttoyurdrms gained a slight advantage down the backside, but Its Payday Friday battled back on the inside and reached three-quarters in 1:24.1. As the field turned for home, MacDonald moved Mego Moss out and around the leaders and swept by down the stretch to shave over two seconds off his lifetime mark.

Sent postward as the 5-2 second choice, five-year-old Mego Moss paid $7.20 to win. Crosbys Clam Bake (Paul MacDonell) and a pylon-skimming Flight Of The Kiwi (Chris Christoforou) came on for second and third while Its Payday Friday and Hldontghttoyurdrms held on for the final two paycheques in the field of 10.

Mego Moss, who finished third in last Saturday's opening leg of the series behind Hldontghttoyurdrms and upset winner West Side Story, now has four victories in 12 starts this year and seasonal earnings of $47,490.

In other trotting action, Saturday marked the return of former Canadian Horse of the Year and fan favourite San Pail. After winning a pair of qualifiers earlier this month at Woodbine, San Pail made his 10-year-old debut under the lights in Saturday's $34,000 Preferred Trot with Randy Waples aboard, but broke stride while following eventual winner Slip Into Glide ($6.20) and Mario Baillargeon towards the third quarter mark. Second choice Slip Into Glide led every step of the way through fractions of :28, :57.2 and 1:25.4 and powered home for an open-length victory in 1:53.3. Boogie Woogie (Keith Oliver) and Zeus Lightning (Jack Moiseyev) rounded out the top three finishers.

The win was the third in 12 starts this year for the six-year-old Yankee Glide-Balanced Breeze gelding, who is owned by trainer Ben Baillargeon and partner Craig Turner of Ingersoll, Ont. His seasonal earnings climbed to $59,000.

Mayotte sent the five-year-old Mach Three-Marg N Jan gelding first over from fourth after a :26.3 opening quarter and reached the half in :55.3. Machal Jordan continued to lead the way past three-quarters in 1:22.4 and held off the oncoming Nickle Bag (Phil Hudon) down the stretch for the half-length victory, coming within one-fifth of a second of his lifetime mark. The season-debuting Thinking Out Loud (Randy Waples) finished one and three-quarter lengths behind in third.