Top Me Off Takes Weiss Prelim

The Bar Hopping sophomore trotting ridgling Top Me Off became the only male to come through the Bobby Weiss Series preliminaries undefeated, as he equaled his mark of 1:54.2 with a hard-earned victory in his division of that group’s $17,500 third and final prelims during the Sunday (April 18) card at The Downs at Mohegan Sun Pocono.

Todd Schadel guided Top Me Off—last year’s PA Fair champion and undefeated in four starts this year—to the lead before the :27.3 first fraction, with Tart Tongue yielding then stalking him through middle fractions of :57 and 1:25. Tart Tongue took his shot in the Pocono Pike but came a half-length short, with Black Tie Bash closing well to get nosed out of second behind the winner, who is also trained by Todd and is co-owned by him, his wife Christine, and Rick and Regina Beinhauer. 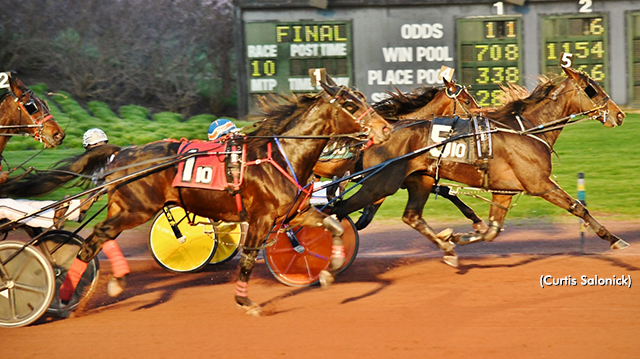 The Winning Mister gelding Tricky Dick reversed last week’s photo loss to Credit Con by catching that one late to win by a neck in 1:56.1 for his second win in the series. Anthony Napolitano drove the developing three-year-old for owner-trainer Jim McGettigan.

The Southwind Frank colt Pilot Hanover, a $240,000 yearling, punched his ticket for the $40,000 Championship next Sunday, but he needed the entire stretch to get ahead of a game Ceffyl Dwr by a nose while reducing his mark to 1:55.3. Mattias Melander was in charge of the consistent sophomore for trainer/brother Marcus Melander and S R F Stable.

The point standings going into the Championship event read as follows: Top Me Off, Tricky Dick, Hoolie N Hector, Ceffyl Dwr, Killer Instinct, Credit Con and Pilot Hanover (tie), Black Tie Bash, and Robbie Pev. Maddys Leading Man is AE1; to establish an AE2, it will be the luck of the draw between Capital T Storm and Halls Of Valor. The trotters’ final will be drawn on Tuesday.

Only four favourites won during the 12-race card Sunday at Pocono, but the other eight races were taken by six second choices and two third choices.

Monday’s (April 19) 12:30 p.m. (EDT) card at Pocono will feature three sections of the final Weiss preliminary for the sophomore filly pacers. Double winners in the series so far are So Irresistible (Race 3, post 3) and Incaseyoudidntknow (Race 5, post 6). Program pages will be available at the PHHA website.