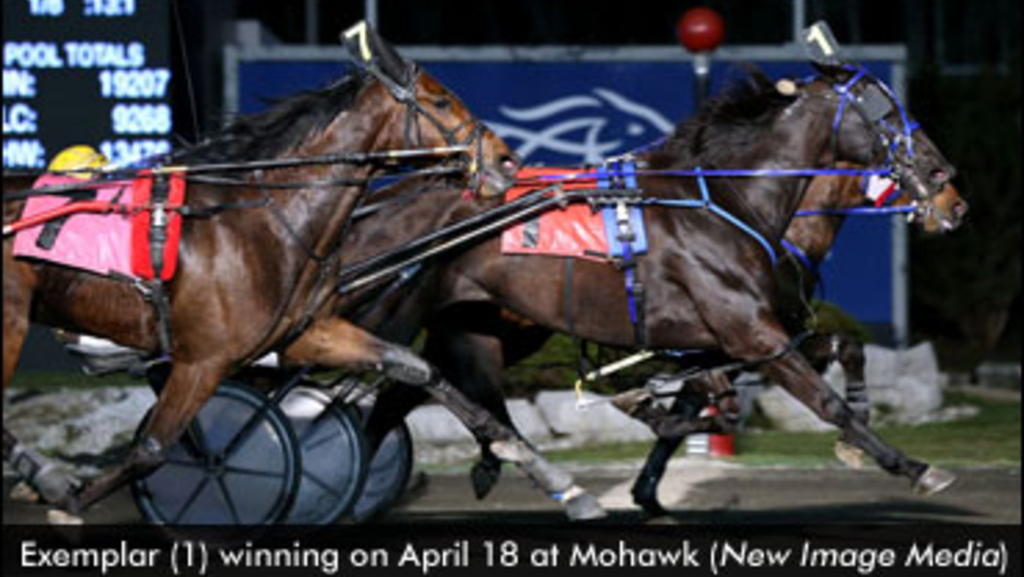 There was just one $20,000 division for the second leg of the Don Mills Trotting Series on Saturday night at Mohawk Racetrack, but it was action-packed from start to finish with Exemplar ultimately getting his nose to the wire first over heavy favourite Bourbon Bay in a photo finish.

Exemplar pulled off a 23-1 upset with Trevor Henry steering him to a lifetime-best 1:53.3 victory for trainer Richard Moreau and owners Andrea Lea Racing Stables Inc. of Lakefield Gore, Que. and Asa Farm of Norwood, Ont.

Ramas Last Son (Jack Moiseyev) grabbed the attention of onlookers early as he fired off the gate from the outside post 10, but the inside horses had him settling for a mid-pack position into the first turn. Bourbon Bay (Mike Saftic), meanwhile, left from post three and cleared to command over insiders Windsun Revenge (Rick Zeron) and Exemplar by the :27.4 first quarter mark.

Three-wide early on, Wild And Crazy Guy (Randy Waples) was parked out from post eight and advancing. Down the backstretch, Wild And Crazy Guy moved up to confront his fellow first leg winner and the 2-5 favourite released him before the :55.4 midway mark.

Securing the lead, Wild And Crazy Guy led the way towards the turn while Henry tipped Exemplar off the pylons. That move forced Bourbon Bay from the pocket and he battled with Wild And Crazy Guy past three-quarters in 1:25.1 and into the stretch. Bourban Bay eventually took over the lead, but Exemplar kept coming along with the wide-rallying Etruscan Hanover (Mario Baillargeon) and Sheer Flex (Jody Jamieson).

Putting the photo finish camera to work, Exemplar had the miniscule advantage over Bourbon Bay when they hit the wire together while Estruscan Hanover came within a half-length of the top two for third-place. Sheer Flex finished to their outside in fourth and Windsun Revenge rounded out the top five finishers.

A show finisher in round one of the series last weekend, Exemplar paid $48.50 for the second leg upset.

The black Andover Hall-Southwind Serena gelding, who earned his third victory of his five-year-old campaign, has nine wins lifetime in 35 starts and purse earnings of $121,470. Bred in part by co-owner Andrea Lea Racing Stables, Exemplar is a half-brother to world champion filly Mission Brief (sired by Muscle Hill). 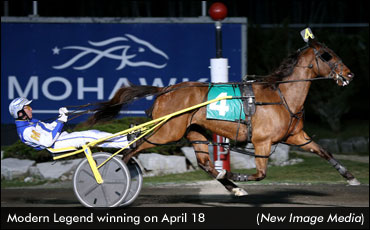 Sent postward as the 3-5 favourite off his 1:50.3 season's debut a week ago, the homebred Modern Art-Ruby Cam gelding settled into third through a :27.3 first quarter and then took command down the backstretch under the guidance of reinsman James MacDonald.

The 2014 Canadian Pacing Derby champion reached the half in :54.4 and raced by three-quarters in 1:22.3 while keeping a quick-brushing Captive Audience (Chris Christoforo) at bay.

Down the stretch, Modern Legend pulled clear from his first over foe and was kept to task to secure the victory in 1:50 flat, with Nickle Bag (Trevor Henry) and Alexas Jackpot (Jack Moiseyev) emerging for second and third-place amidst a wall of late-closers one and a half lengths behind.

Modern Legend now has 21 career wins as he inches closer to the million-dollar milestone. Tonight's victory puts his bankroll at $938,825.