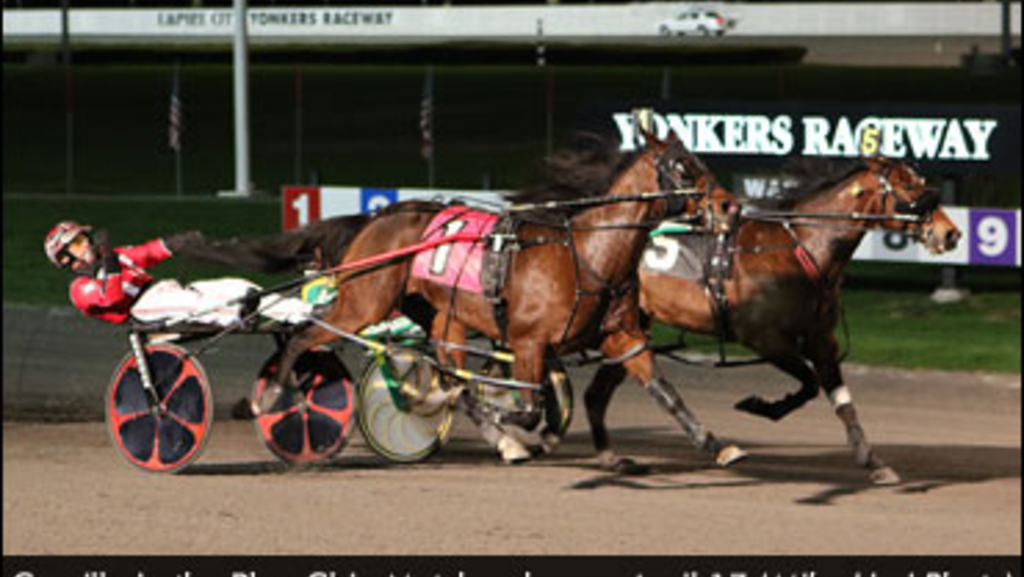 Yonkers Raceway hosted the fifth and final preliminary round of the Blue Chip Matchmaker of Open pacing mares on Friday night.

It was Camille then finding front before a :28-second opening quarter-mile, then a :56.4 intermission. For The Ladies N (Brian Sears) tried it from third, engaging the leader in and out of a 1:25 three-quarters.

However, Camille rejected those advances, taking a three-quarter length lead into the lane. She then encountered a passing-lane Krispy Apple, with the second choice missing a scant schnozz. Strings (Eric Carlson) wound up third as the 67-1 rank outsider.

For Camille, a seven-year-old daughter of Camluck co-owned by trainer Ron Burke (as Burke Racing), Weaver Bruscemi, M1 Stable and Jack Piatt III, it was her third win in eight seasonal starts (two-for-four in series). The exacta paid $4, with the triple returning $23.80

It should be noted that the first three leading ladies through four Matchmaker rounds—Carolisideal, Venus Delight and Yagonnakissmeornot—all took this week off with their invites to the final solidified. They are to be joined next week by Camille, Monkey On My Wheel, Fancy Desire, Krispy Apple and Strings.

In Friday's $31,000 Fillies & Mares Preferred, four-time O'Brien Award winner Anndrovette (Tim Tetrick, $2.90) circled the field of six and nosed out Jonsie Jones for the first win of her eight-year-old campaign in 1:53.4 following three third-place finishes in the Blue Chip Matchmaker Series. The $3.1 million earner is trained by Jeffrey Bamond Jr. and owned by Bamond Racing and Joseph Davino.