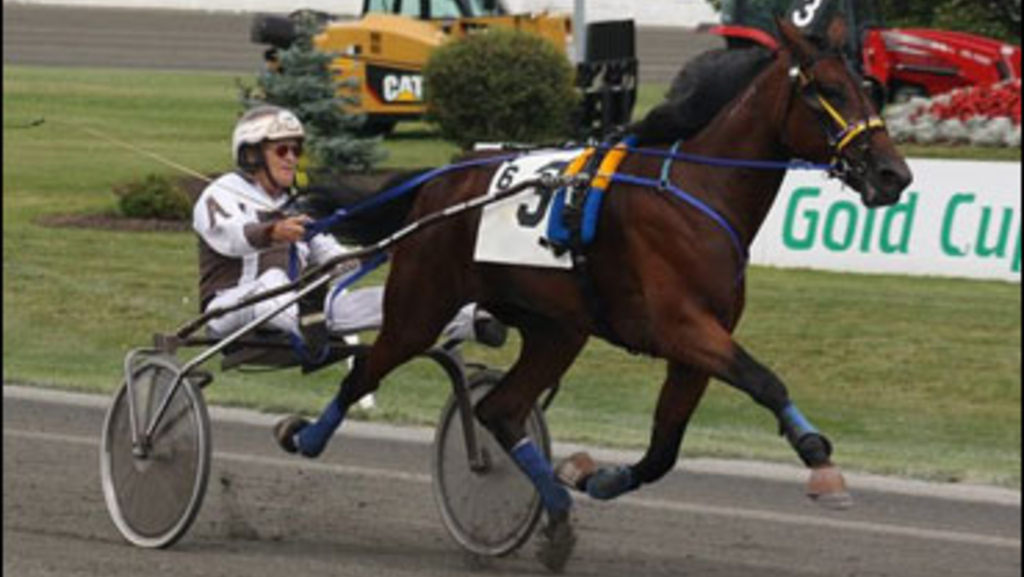 A capacity crowd of over 330 was on hand to enjoy the presentation of awards to all the divisional champions for age and gender from the 2011 racing season. As well, their was a number of awards presented to the various people involved in the sport.

One of the features on the evening was the appearance and presentation from world class harness trainer and owner Mark Ford from the United States. Ford was the youngest trainer is history to reach $40 million in career earnings, and is a past winner of the Glen Garnsey Trainer of the Year Award, presented by the United States Harness Writers’ Association. His stable has earned at least $3 million in the last nine consecutive years and in 2011 was third in earnings and fourth in wins in North America. Ford trained Gallo Blue Chip, 2000 Horse of the Year and the richest pacer in the history of the sport with $4.26 million in earnings.

The following are the various awards and recognitions on the evening:

In order to be eligible for an award, horses must be wholly owned by a member of the PEISHOA. Two and three-year-olds must make at least five starts in the Maritimes during the year. Horses older than three must make a minimum of 15 starts in the Maritimes. Horses other than stakes, Invitational and Open mares must have made a majority of their starts at the Charlottetown Driving Park. In the claiming categories, horses must have made the majority of their starts as a claimer.

Horse in each category are awarded points based on number of wins, percentage in the top three, and earnings. Maritime races only are used in the calculation of these points. The horse with the highest point total is the award winner. In the event of a tie, the fastest winning time is used to determine the winner in that category. The same system is used when comparing the category winners to determine the Horse of The Year.

Grooms of the Year
Sponsor Neil Bambrick presented the Male and Female Groom of The Year Awards, in the memory of the late Wendell Ford, recognizing those individuals who toil in the stables and are a key component of any successful racing operation. The 2011 winners come from the Darren Trainer and Earl Watts Stables. The winners are Kenny Burris and Tammy Sonier.

Mr Trot Challenge
The top driver based on points earned in trotting races at the CDP during the year wins a cash award and a trophy presented by Johnston Homestyle Products. The 2011 winner is Mark Cullen.

Leading Dash Winner Award
The award was presented to Marc Campbell with a new record of 122 wins in 2011.

Leading Percentage Trainer
This award recognizes the highest percentage trainer with a minimum of 100 starts at the CDP. This year's leading percentage was a UTRS of .327 and the winner is Jackie Matheson.

Leading Percentage Driver
The leading percentage driver, with a minium of 100 drives, for the 2011 season at the CDP with a UDRS of .336 is Marc Campbell.

Appreciation Awards
The PEISHOA recognized several individuals who contributed their time and efforts in support of the association and the harness racing industry. They were Tessa MacKinnon, Stephen Hicken, Nowlan MacCarthey, Willard Dunn, Jamie Smith and Wayne Court for there tremendous efforts throughout the year.

The 2011 honouree has had a life long involvement in agriculture, and is an inductee into the PEI Business Hall of Fame. He has been a horse owner for four decades, and was a co-owner of Sauls Pride, who became a two-time winner of the Gold Cup & Saucer. In addition, he and his family are active supporters of the regional yearling sales, and have owned and bred numerous successful stakes competitors.

Together with his wife Marj, he owned and operated Dunachton Farms in Pownal, which for three decades raised stakes champions. Multiple Maritime champion and track record holder, Dunachton Gale was one of the dominant horses in Atlantic Canada, a regional Horse of The Year, and was a Gold Cup & Saucer Trial winner. Other multi-stakes winners include Glengyle Marj, Ms Regan, and Eye Emma Star. Dunachton Farms also have the distinction of producing the first Maritime 2:00 stakes winner, Dunacton Dandy. In ownership ranks he has partnered on recent stakes winners such as R Es Mary, Tiger Williams, and Touch Of Lightning.

The Standardbred Canada Owner of the Year is Don Smith.

Most Dedicated Horseperson
This award was established by longtime owner Collins Wood, in memory of Roland Wood, to recognize the spirit and dedication of horsepeople on Prince Edward Island. Bobby Drake is sponsoring the trophy again this year.

The 2011 winner epitomizes the qualities of this award, and is involved as a driver, trainer, owner, and breeder. He is one of those individuals who is always the first to help his fellow horsepeople, either at the track or at the farm.

Hailing from the harness racing hotbed of Cornwall, he is a key component of the largest training centre on Prince Edward Island.

One of the most familiar faces in Maritime Harness Racing, the PEISHOA is pleased to recognize one of the truly good guys in harness racing, Donnie MacNeil as the Most Dedicated Horseperson.

2011 SHOA Active Horseman of the Year
Prince Edward Island is truly blessed to have world class breeders, grooms, owners, drivers and trainers, the most dedicated staff and fans in the business, as well as the often unheralded people who contribute their passion, time and talents to the business.

The 2011 SHOA Active honouree started out as a fan, then became a groom in the MacGregor and MacDonald Stables. He returned to university and established his career and family, but always continued his passion for preserving and protecting the great history of our industry, and the stories of those people, places, and horses, on whose shoulders we all stand today. The honouree played a lead role in obtaining and researching the wonderful display items at both Red Shores Charlottetown and Summerside. When the Canadian Sportsman magazine named Red Shores Charlottetown as the “Jewel of Canadian Harness Racing,” it lauded the preservation of the history of the provincial, regional, and national industry within that building.

Earlier this month, the honouree was named as Canada’s first Heart of Harness Racing Ambassador by Standardbred Canada. He was a volunteer on the Host committee for the World Driving Championship, at every Atlantic Breeders Crown held at the CDP, and served as the historian for the PEI Colt Stakes 75th Anniversary publication.

In recognition of his contribution to Prince Edward Island harness racing, the PEISHOA is pleased to present this year's award to Jerry McCabe.

Horsewomen of the Year
The Horsewoman of the Year award was established to recognize the significant contribution of horsewomen to P.E.I. horse racing.

The honouree comes from a family whose harness racing roots trace back six decades. Her father was recognized as a participant in the inaugural winter racing program at Summerside Raceway, and was an active horse owner until his passing.

She has raised numerous foals on her farm, and is one of the most dedicated horsepeople in our business, attending virtually every live racing program at both the Island tracks.

Active as a breeder, owner, and trainer, among the horses she has owned include Amberflite, Maple Leaf Hotshot, Top Quality First, and Carpandero Hanover.

The PEISHOA is pleased to present the Active Horsewomen the Year award to Shirley Weeks.

Horseperson of the Year
The City of Charlottetown sponsors this award, which recognizes a lifetime of activity in Prince Edward Island harness racing.

The 2011 winner hails from one of the most successful farm families on P.E.I. and followed his father into the Atlantic Agricultural Hall of Fame. A longtime breeder of high quality purebred cattle, he was also dedicated racing fan, avidly following horses and bloodlines throughout his life.

Three decades ago, at an age when many would be thinking of retirement, he bought his first horse, Cracklin Meg, and has been an active breeder and owner ever since. He also is a regular visitor to the backstretch and still enjoys jogging his own horses. The products of his farm carry his initials, G L, and include Emma, Megan, Columbo, and George, and he has also owned Pedro, Jorg, Rebas Chance, and Rustico Triblaze. Currently he shares ownership in three horses in training at the CDP with his good friend Peter Buchanan.

In two weeks time, he will turn 92 years young. Two days after that he will embark on a two week trip to South Africa, and will be back jogging horses this summer at the CDP.

The PEISHOA is proud to recognize as Horseperson of the Year, George Boswall.

Atlantic Breeders Crown Awards
As an added bonus to the evening's event, the Atlantic Standardbred Breeders Association recognized the Prince Edward Island winners of the 2011 Atlantic Breeders Crown. P.E.I. is home to five of the six Atlantic Sires Stakes divisional champions, with four of them bred on P.E.I.: Jonathon MacDonald for My Daisy Duke, Ralph Annear and Steven Sorrie for Maple Leaf Spirit, Reg MacPherson for Astronomical Union, Danny Ross and Billy Bell for Pictonian Amanda, and Ross for Pictonians Souwest.

The Moncton Horse Owners Club also sponsors a trophy for the leading owner in the Atlantic Sires Stake program, which was awarded to Greenoaks Farms.