Miami Valley Raceway presented the $24,000 annual Craig Colston Memorial Open Pace on Saturday, April 14, honouring the memory of one of Lebanon Raceway’s staunchest supporters. When the winner, Night Pro, returned to the winner’s circle he was surrounded by about 40 of Colston’s family and friends.

Owner-trainer-driver Dale Decker positioned Night Pro on the front following a failed effort to win from behind last week. Working to secure the front in a :26 flat opening panel, Night Pro slowed the tempo to a :54.3 half before being pressured. The eight-year-old son of Pro Bono Best—out of the mare Midnight Jewel—continued to show the way to the 1:23 three quarters station, kicking home in control to a 1:51.4 victory.

Longshot Savage Seelster took full advantage of the innermost post position and a pocket ride throughout to finish second, while My Hero Ron rallied from last in the full field down the backstretch to grab third.

Co-featured on the Saturday card were a pair of $15,000 James K. Hackett eliminations for some of Ohio’s finest three-year-old colt pacers. Sectionline Bigry, who set the 1:51 track record for the age and sex in his last start, overcame an outside post to score a 1:51.3 tally over Bounding Dragon and Bus Ninethirtysix. Also advancing to the $40,000 championship were fourth place finishers Oberlin and Gotarockinmypocket on the merits of the quickest fifth place finish in the two eliminations.

Harold Lee and Harold L. Bauder of Delaware, Ohio bred and still own the winning son of Pet Rock out of their prize broodmare Aquatic Yankee. Steve Bauder is trainer and Tyler Smith was in the bike. 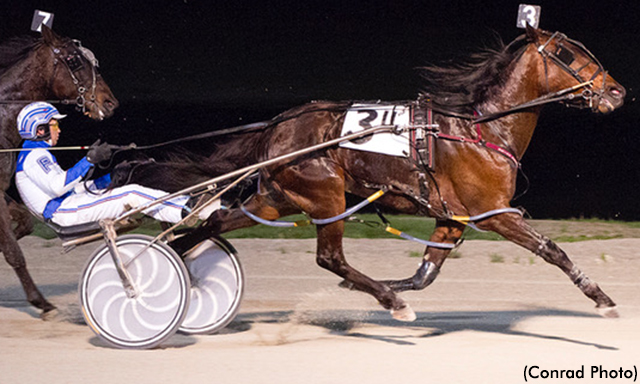 Dragonology, from the Brian Brown Stable, proved best in the second split, topping fellow championship qualifiers Stark Hanover, In Trouble Again and Harambe Deo. The son of Dragon Again earned $75,000 as a freshman, including a third place finish in the $250,000 Ohio Sires Stakes championship and a victory in the Ohio Breeders Championship at Delaware. It was the first start of the colt’s sophomore season for owners Country Club Acres, Joe Sbrocco and AWS Stables. Chris Page was in the bike.

The fields are now set for all four $50,000 Hackett Memorial finals next week. The three-year-old trotting fillies will go postward on Monday, April 16, with the trotting colts going on Tuesday, April 17. The sophomore pacing fillies contest their final on Friday, April 20 and the pacing colts complete the annual Hackett series with their final on Saturday, April 21.