The Power Of A Positive Story 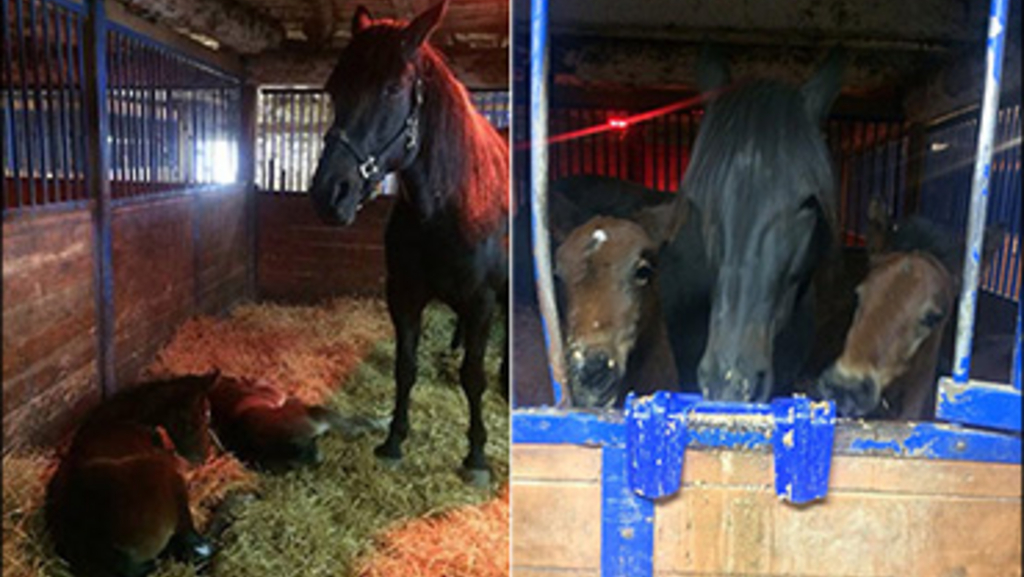 The story of an Ontario-based Standardbred broodmare with a foal at her side adopting an orphan foal has become an international sensation, and one of the best feel good stories in the industry in recent memory.

Last week, Kawartha Downs' Facebook page posted a story titled The Brother From Another Mother. It involves broodmare Emprize Hanover, her weanling filly and their adopted son. The story of the trio, who make an appearance on Page 9 of the April issue of Trot Magazine, was subsequently picked up by several industry websites. Joanne Colville, whose High Stakes Stable is home to the unusual family, started hearing from people far and wide.

“One gentleman from the U.S. wrote me an email and said he was over 60 years old and not embarrassed to say he had tears in his eyes when he read the story,” Colville, adding that’s she’s had countless emails, texts and messages about the story and asking how the popular little family is doing.

Kawartha has an active Facebook presence with stories posted on a regular basis. A popular posting usually receives around 2,000 views. This story is currently at 32,282. People from around the world have viewed the post, with more than 256 of them sharing it with others.

Comments have been in several languages and include remarks such as: "What a heart warming story.", "Great story!", "What a joyful story. Bless this mare's heart.", "I love this story & what a good mom she is!!", "Mother nature can be amazing!!", "LOVE good stories! Big thank you for sharing!", "Standardbreds are so amazing - kind and loving animals...", "Hurray for mom. Exceptional."

The trio, who now have their own public Facebook group, will be on hand to greet fans at an open house at Joanne’s farm in Moffat, Ontario, taking place -- appropriately -- on the afternoon of Mother’s Day, May 8.

SC and Trot Magazine will continue to cover these two foals, and their amazing mom, as they make their journey through the coming months and years.

The Brother From Another Mother

There’s a broodmare at Joanne Colville’s High Stakes Farm, Emprize Hanover, who will be receiving extra presents on Mother’s Day next month due to her loving welcome of an orphan foal despite already having a newborn of her own. Her wonderful, feel good story has become an Internet sensation over the past few weeks since Joanne shared it on her Facebook page.

The story began on March 4th when Emprize Hanover delivered a filly by E L Titan. It was the fourth foal for the Credit Winner mare owned by Chris Christoforou Sr., the grandfather of Joanne’s daughter Emma.

“As soon as it happened we were able to get milk from Emprize for him as she was the only mare at that time with a foal,” explained Joanne. “I started phoning around looking for a nurse mare and drove to Darlene Hayes’ place nearby for the colostrum and went to the feed store for milk replacement.

“We got a couple of bottles into him and I’m thinking ‘what are we going to do? This is a nightmare.’ Then the foal started to call and Emprize Hanover called back to him. So my ingenious daughter comes up with the idea of putting him in with Emprize and her foal.

“Emma and her friend put the foal on a cooler and carried him into her stall,” related Joanne. “The mare sniffed him and licked him so they gently lowered him on the cooler into the straw. The colt still hadn’t been up at this point.”

Joanne and Emma kept a close eye on the situation but Emprize made it easy as she quickly accepted the newcomer and didn’t bat an eye when he was standing and starting to nurse.

“The only issue we had was with the filly who thought he was a new playmate, she was 12 days older and he was newborn. But as soon as he was able he gave her the ‘leave me alone’ message and she got it and they’ve been best buddies since then,” noted Joanne who is the administrative co-ordinator for the Ontario Standardbred Adoption Society, Chair of Standardbred Canada and outrider on the WEG tracks as well as operating a breeding farm.

“Emprize Hanover has been an absolute godsend, she’s worth her weight in gold. I sent Murray Brown (the PR Director at Hanover Shoe Farms, which bred Emprize) a private message the other day and said ‘you raised her right.’

“I’ve had countless people tell me they’ve never heard of a situation like this before, where a mare with a foal that old would accept a newborn. We call the colt the brother from another mother.

“What’s really nice as well it it’s proven to be a feel good story for a lot of people who follow my Facebook page. They send all kinds of messages about how it makes their day and when I haven’t posted photos of the pair for a couple of days, I hear about it.” 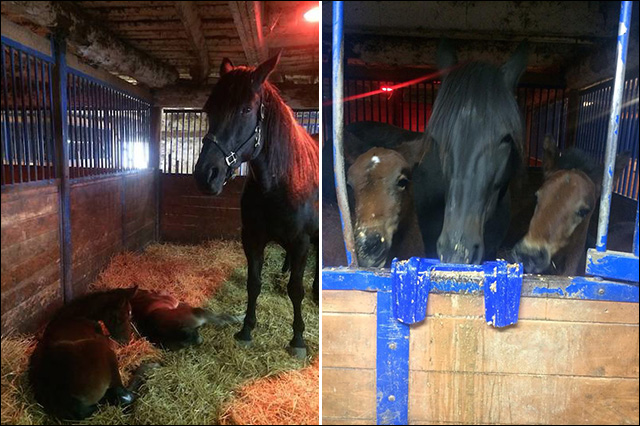 For her trouble, Emprize Hanover gets a couple of extra meals a day and the foals, who are known around the stable as Junior and Elena, have their own creep feeder for themselves to start to learn to eat on their own.

“She gets an extra lunch, all the hay she wants and I feed her again just before midnight,” noted Joanne. “She’s earned every bite.”

Anyone interested in meeting the trio are welcome to the Open House at High Stakes Stables near Moffat, Ontario, on Mother’s Day next month in the afternoon.

Heart warming story. May their racing careers be long. Coming up with a name for the pair will be interesting. As a race fan, I've been working on a project since 2012. I've been trying to put a 'title' on it, and I came up with two possible names. The first one is "A Dream Within A Dream", and the second one is "A Dream Inside A Dream". Maybe it would be nice to name the filly "Dream Within A Dream" and the colt "Dream Inside A Dream".

Super story. Joanne: All the

Super story. Joanne: All the best with their rearing.

Joanne... The mare is a blessing to have. Congratulations. They are a beautiful pair of foals.