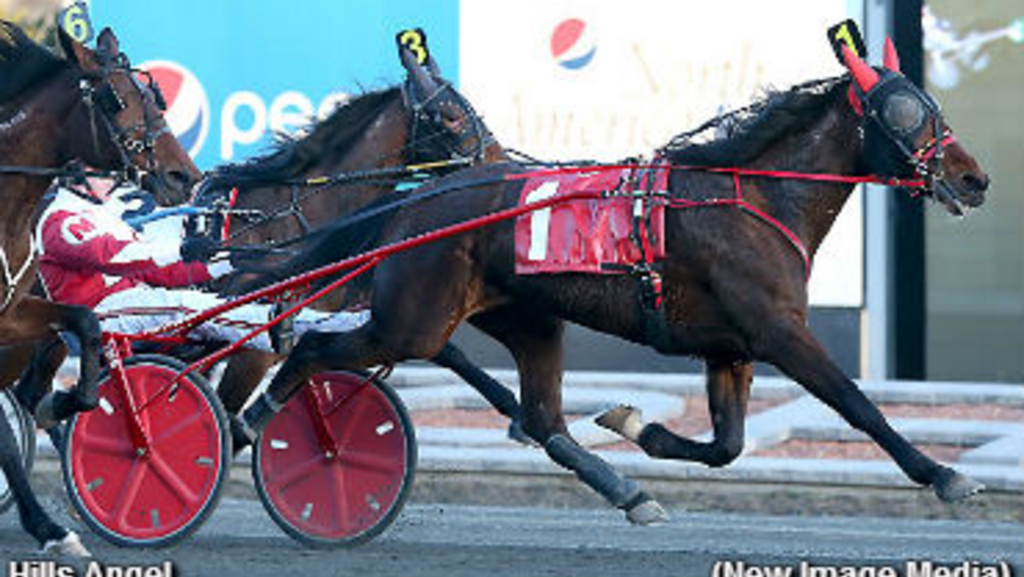 Three-year-old trotting fillies were out in full force Thursday evening as Mohawk Racetrack featured the opening leg of the Celias Counsel Series.

Hills Angel captured the opening division for the tandem of driver Paul MacDonell and trainer John Bax. The filly got away fourth before rushing to the lead in the backstretch, and once she cleared she sliced out middle panels of 1:02.3 and 1:33.3. She fired home in :28 to prevail by a half-length margin over True Muscle in 2:01.3. Dottie was a lapped-on third.

Sent off as the 4-5 favourite, the daughter of Muscle Hill-Balance The Paige won for the first time this season and for the second time in her career. Bax Stable and Glengate Farms of Campbellville, Ont. own the winner of $32,820.

Wanaka was much the best in the second division for the husband and wife duo of driver Trevor Henry and trainer Shannon Henry. After taking turns on the lead with race favourite Flowers N Songs, Wanaka overtook that foe in the lane and drew clear to win by 4-1/2 lengths in 1:56.4. Flowers N Songs was second best, with P L Jill taking home the show dough.

Trevor Henry Stables Inc and 1035840 Ontario Inc of Arthur, Ont. own the daughter of Manofmanymissions-Classic Belle. The victory was her fourth of the season after going 0-for-2 in last year’s rookie campaign. The $8,000 payday bumped her earnings to $50,200.

Windsong Magic gave MacDonell and Bax their second trip to victory lane thanks to her 1:58 triumph in the third division. The daughter of Kadabra-Diamond Image got away second before making a move to the lead in the backstretch. She cleared easily and proceeded to slice out middle fractions of :59 and 1:29.3. She then used a :28.2 closing panel to win by 2-1/2 lengths over stablemate Miami Magic, with third prize going to Smash Hit.

It was the fourth win of the season for the lightly-raced lass, who was unraced as a rookie. Kristine Green and Paulette Loyens share ownership on the homebred who bumped her lifetime earnings to $29,240 with the win.