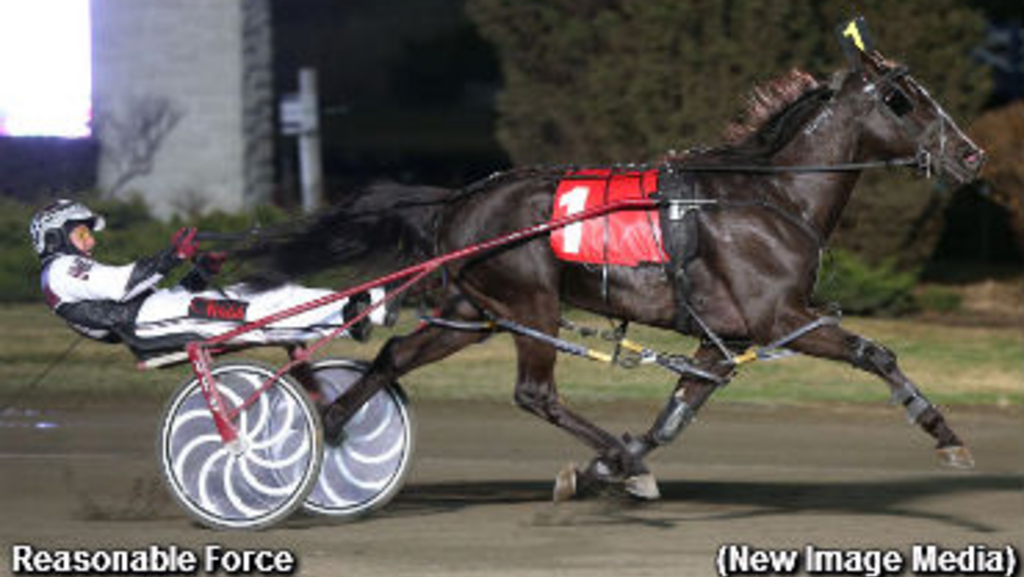 With the big money on the line in Monday’s $36,200 final of the Youthful Series at Woodbine Racetrack, Reasonable Force dug down deep and turned in a gritty victory at odds of 15-1 for the tandem of driver Doug McNair and trainer Anthony Montini.

McNair got away fifth with Reasonable Force while Account Rollover shot to the front Post 10 and sped the field to the quarter pole in :27.1. He was still in command at the half in :56, but Reasonable Force was getting underway with his first-over rally.

Account Rollover was still on the lead at the three-quarter pole in 1:24.4, but Reasonable Force was coming up fast in that gelding’s rear view mirror as the field entered the lane. Reasonable Force surged to the top in the stretch and drew clear to win by two lengths over race favourite Andreios Kardia in 1:53.3. Dragon Seelster tagged along to finish third.

The son of Shadow Play-JK Hello Dolly races for owners Doug Dunbar of London, Ontario and Robert Leblanc of White Plains, New York. The victory was his second of the season and the lion’s share of the Youthful Series loot lifted his career cash stash to $44,840.

Monday’s program also featured the second leg of the Lifetime Dream Series, with a pair of $18,000 divisions on tap for the four and five-year-old mares.

Rose Run Oriana was a front-stepping winner in the opening split for the tandem of driver Randy Waples and trainer Corey Johnson. Purchased privately since her last start, the four-year-old daughter of Trainforthefuture-Rose Run Doowrah sped through panels of :28, :57 and 1:25.3 before turning back a late challenge from the odds-on favourite, Rockin With Dewey. That foe finished 1-1/2 lengths in arrears of the winner, while third prize went to Samira Hanover.

Rolling Hills Racing Stables of Uxbridge, Ontario owns Rose Run Oriana, who improved her 2014 record to 5-1-0 from eight starts this year. The 1:54.2 clocking was a career-best performance for the 15-time winner who now boasts a bankroll of $134,717.

Her Name Is Lola was parked to the half before finding the front, but that didn’t stop her from getting her picture taken for driver Phil Hudon and trainer Russell Bax. The four-year-old daughter of Majestic Son-Armbro Stunning cleared in the backstretch and opened up a solid lead in the lane before managing to find the line just in time over Frisky Magic. That rival’s late bid came up a nose short. Standing My Ground rallied from far back to finish third.

Baxmar Holsteins Ltd of Port Hope, Ontario owns the five-time winner, who has put together a 3-0-3 record from nine trips to the track this season. The $9,000 payday lifted her cash stash to $85,560.