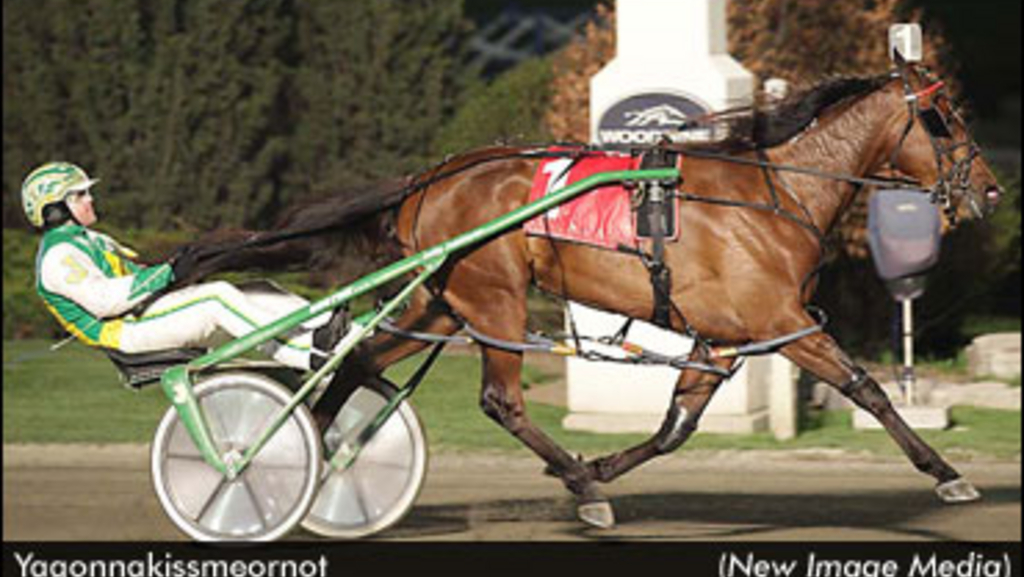 With driver Jody Jamieson in the sulky, the George Teague Jr. student earned the lion’s share of the $50,000 purse with a dominant five and three-quarter length score.

Machleen (Chris Christoforou) paced by the first quarter in :27 before the other Teague Jr. trainee, Arm In Arm (Paul MacDonell), who won a second round division, took over command into the backstretch.

Yagonnakissmeornot then launched a first over attack on her stablemate from fourth. The three-year-old miss cleared the lead past the half in :56.1 and proceeded to the three-quarters in 1:24. From there, the 1-5 favourite began to open up daylight on the field before hitting the wire in a career-best 1:52.3. Mach A Wish (Scott Zeron) and Stage It Right (Mario Baillargeon) finished second in a dead heat. Machleen finished fourth.

“Last week I really found that she liked to be on the lead,” said Jamieson. “In the first leg, I tried to race her from off-the-pace and it didn’t work out. In the second leg, I put her on the lead and she was monstrous.”

After Yagonnakissmeornot got to the front in Saturday's final, the reinsman was confident that no one was going to catch them.

“She is a big, strong filly that has a good attitude,” he said. “George Teague has been known to bring them to the racetrack in good form and she is no exception.”

The daughter of The Panderosa-Artstopper, who finished second and first, respectively, in the preliminary legs, improved her 2012 record to 5-1-0 in six starts. Owned by George Teague Jr. Inc., Ted Gewertz and Fannin Racing LLC, the seven-time career winner has stashed away $114,496 in lifetime earnings.

After finishing second by a neck in the Preferred last week and prevailing by three-quarters of a length in the Open two starts back, Brave Alex Semalu created another exciting finish.

Sparky Mark (Sylvain Filion) laid down opening fractions of :27.2 and :56, but Brave Alex Semalu pulled the pocket as they approached the three-quarters mark in 1:24. Digging in down the stretch, Brave Alex Semalu got up in time to score the 1:50.4 win by a neck. Ideal Choice (Scott Zeron) finished one length behind in third.

Brave Alex Semalu paid $5.70 to win as the 9-5 favourite. The Yankee Cam-Signature Semalu gelding improved his five-year-old record to 4-3-2 in 10 starts and lifted his earnings to $122,700 for owners J And T Silva Stables LLC, Martin Scharf, Bramdeo Singh and John Polvinale. Lifetime, he has hit the board in 33 of his 54 starts while earning over $300,000 in purses.