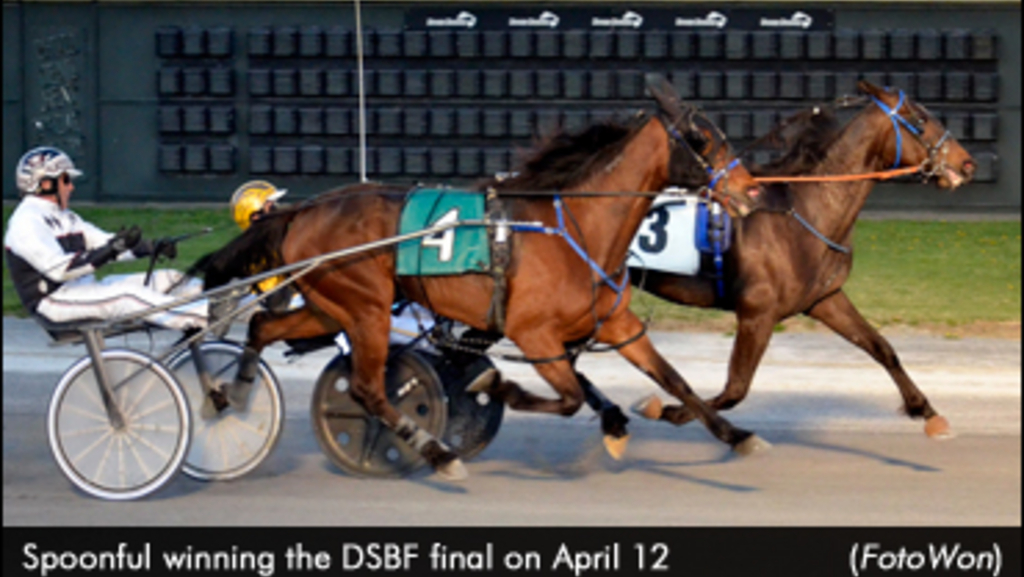 Spoonful won her second $100,000 Delaware Standardbred Breeders Fund (DSBF) final in six months, holding on by a neck in the three-year-old filly trot final, while Celebrity Pegasus set a new track record for an older trotter in the $20,000 Open on an eventful Wednesday, April 12 card at Dover Downs.

Trained by Les Givens, who has trained more DSBF winners than any other conditioner, Spoonful won for the third time this year after sweeping her prelim events, and seventh time in 18 races lifetime to push her earnings to $174,512 for owners Delbert Cain and Nanticoke Racing.

Morand was concerned as Spoonful led turning for home. “I was worried The Spoonful was tiring coming down the stretch, but she had just enough to make it,” he said.

After winning both her $20,000 DSBF prelims, the Political Briefing-Sanctions sophomore was installed a 4-5 favourite in the field of eight. On the backstretch, leader Willow Mill Anna (Donnie Long) began to tire and back through the field when Morand moved Spoonful quickly into the lead. In the lane, Ross Wolfenden came on strongly driving Gogh Cinorita and missed by a neck catching Spoonful in the 2:00 final. Black Magic Mist (Art Stafford Jr.) took third in front of Political Energy (Corey Callahan) with Luv Is Blind (Vic Kirby) taking fifth-place money.

Celebrity Pegasus got away fourth behind Market Share (Tim Tetrick), Tough Mac (Callahan) and Gural Hanover (Tony Morgan) in the $20,000 Open Handicap Trot. Heading past the three-quarters, Art Stafford Jr. rushed the five-year-old son of Andover Hall-Celebrity Athena past the leaders on the outside before the final turn and opened up with a :27.3 final panel to score a 1:52 triumph breaking the former track record held by Hes Spooky (Eric Carlson), established in March 2013, of 1:52.3. Wind Of The North (Kirby) came on for second while Gural Hanover was the show finisher.