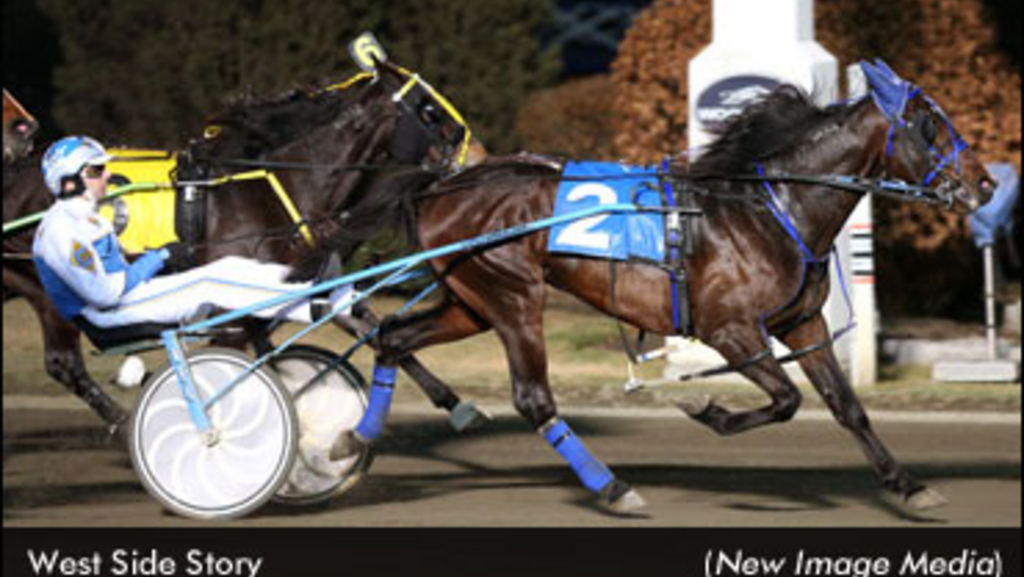 West Side Story came sprinting down the homestretch to steal the spotlight from heavy favourite Hldontghttoyurdrms in the $18,000 opening leg of the Don Mills Trotting Series on Saturday night at Woodbine Racetrack.

When the wings of the gate closed, longshot Our Mojo (Mike Saftic) fired across the track from the outermost post while Hldontghttoyurdrms (Jonathan Drury) bypassed a pocket opening and continued to advance into the first turn. The 1-5 bettors choice cleared to command at the quarter mark in :27.2 and proceeded to lead a single-file 11-horse field down the backstretch.

As Hldontghttoyurdrms passed the :57-half and then headed towards three-quarters, driver Chris Christoforou sent West Side Story first over from fourth with Mego Moss (Jody Jamieson) following his cover.

Hldontghttoyurdrms raced by the third quarter mark in 1:25.3 and held a two and a half length lead into the stretch, but West Side Story kicked into high-gear wore him down for the one length victory. Kicking home in :27.3, he hit the wire in a new lifetime mark of 1:54 flat. Mego Moss finished third.

Per Henriksen trains the four-year-old Conway Hall-Too Good For Yo trotter for Ontario owners Steve Organ of Aurora and Norwood's Asa Farm.

Sent postward as the 6-1 third choice, West Side Story paid $15.30 for the mild upset. The win was his second in a row and fourth in seven seasonal starts, boosting his earnings to $48,500.

Christoforou also drove the winner of the evening's featured pacing event one race earlier. He launched In Commando off the cover of favourite Cougar Hall (Jack Moiseyev) and the Don Lindsey trainee sprinted a final quarter in :26.3 to prevail by a neck in 1:51 over the pacesetting Clyde Hirt Series champion Avatartist (Mike Saftic). Longshot Daddy Warbucks (Phil Hudon) came through off a pocket trip for third, finishing three-quarters of a length behind.

Lindsey co-owns In Commando with Paul Kleinpaste of Orangeville, Dennis Mavrin of Woodbridge and William Alempijevic of Portland, Oregon.