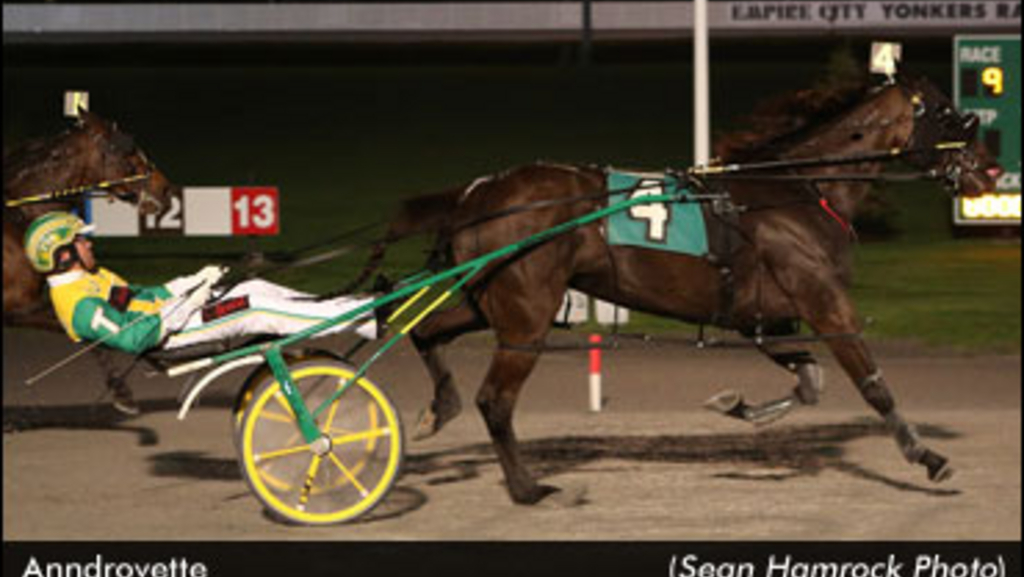 It couldn't have been much easier for puny proposition Camille (Yannick Gingras, $2.10). Leaving from post position No. 5 in the first division, she worked around her wagering friend Hot List (Matt Kakaley), then took over from pole-squatting Full Picture (George Brennan) right at a :27.1 opening quarter-mile. After a :57.2 half, Hot List tried her luck first-up, never getting close. Camille found a 1:25.4 three-quarters, owned a length and a half lead into the lane and had no issues whatsoever. Camille won by a length and a quarter in 1:54.3. Full Picture held second, with Moonlit Dragon (Brian Sears) closing for third.

Camille, a five-year-old daughter of Camluck co-owned by trainer Ron Burke (as Burke Racing), Weaver Bruscemi, M1 Stables and Jack Piatt, is now three-for-four this season (and in series). The exacta (two choices in order) paid a season-low $3, with no triple wagering offered (five wagering interests).

In the second split, Ginger And Fred (Kakaley, $2.10), from post No. 3, went past her barn buddy Ramalama (Gingras), then defeated first leader Warrawee Koine (Jason Bartlett) by a length and three-quarters in 1:54.3. Keepers Destiny (Sears) was third. Ramalama, who ripped out of the pocket to defeat 'Ginger' a week ago, was no match here. She played leapfrog on the lead with Warrawee Koine early (:27.3), found a :56.1 half and 1:25.3 three-quarters, but was done off the turn and wound up fifth.

For Ginger And Fred, a seven-year-old daughter of Real Artist trained by Burke for co-owners by Edwin Gold, Howard Taylor, Robert Feldman and J&T Silva Stables, it was her first win in four seasonal/series starts. The exacta paid (two choices) paid $4.10, with no triple wagering offered (five wagering interests).

Bettor B Lucky (Gingras, $10.40), from post No. 5, was left to her own early devices (:28.3, :58.1) in the third division before 7-10 Krispy Apple (Kakaley) moved from fourth. After a 1:26.2 three-quarters, Bettor B Lucky widened by two and a half lengths entering the lane. She needed all of that advantage, just holding off a pylon-skimming Eighthunrdolarbill (Sears) by a desperate nose in 1:55. Krispy Apple was a drifting third, beaten a length.

Anndrovette, a six-year-old daughter of Riverboat King trained by PJ Fraley for co-owners Bamond Racing and Joseph Davino, is now three-for-four in '13 (and series). The exacta paid $5.70, with the triple (three choices in order) returning $13.