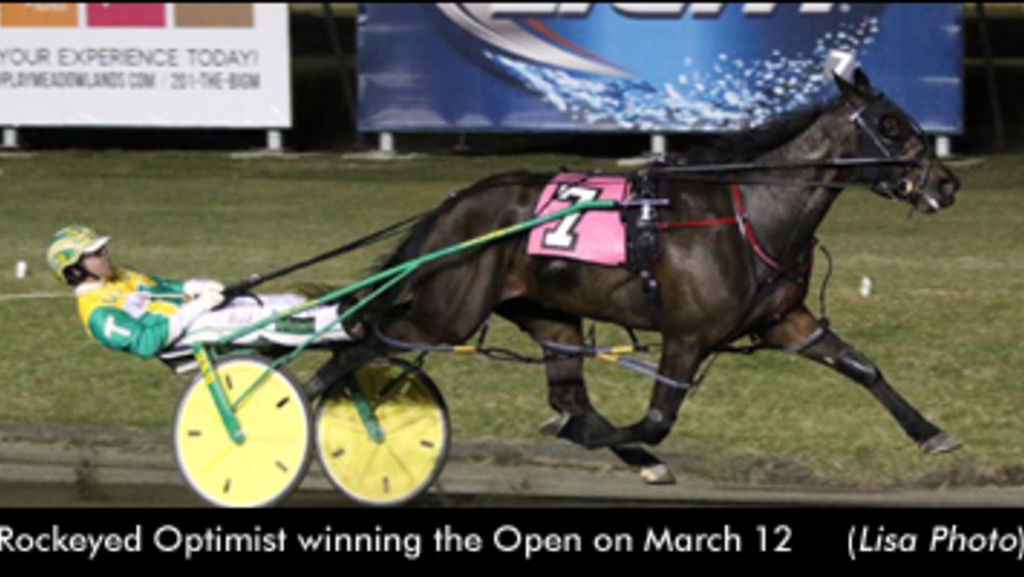 There was plenty of speed for Rockeyed Optimist to chase in Monday’s $36,000 Open Preferred Handicap at Dover Downs, and as a result the gelding posted the fastest mile of the season in North America.

Tim Tetrick got away third in the assignment with the Steve Elliott pupil, while Atta Boy Dan and Smart Rokker battled by the quarter pole in :25.4. Atta Boy Dan worked his way to the top and proceeded to carve out huge panels of :54.2 and 1:21.2, but he couldn’t go the distance. Rockeyed Optimist applied first-over pressure on the leader on the way to the three-quarter pole, and he summoned up a :26.4 closing quarter to overtake that foe en route to the half-length score in 1:48.2. Atta Boy Dan held on gamely for second, while Smart Rokker settled for the show dough in the six-horse affair.

Anthony Perretti, Virginia Berkner, A And B Stable and Joseph Battaglia share ownership on the five-year-old son of Rocknroll Hanover-Art Amour. The victory was his fifth of the season from seven tries. The 20-time winner now boasts a bankroll totalling $360,795.

The richest event of the card – the $100,000 Delaware Standardbred Breeders Fund Final for three-year-old trotting colts and geldings – went to Seafood Scrappy and driver Ross Wolfenden in 1:59. After miscuing shortly after the start, Seafood Scrappy played catch up for the remainder of the mile. He was eighth at the quarter pole, seven and parked at the half and then fifth as the field hit the three-quarter pole. Overnight Shipper did all the road work through panels of :28.2, 1:00.4 and 1:29.2, but Seafood Scrappy overcame his brutal trip to prevail by a neck over Outside The Line in 1:59. Samuel J was third best.

Sent off at odds of 14-1, the Josh Green-trained Seafood Scrappy won for the second time this season in just four attempts. After going winless in 11 starts as a rookie, the son of CR Commando-Aachoo has filed away $94,810 to date for JJ And M Stable and Seafood Delight Stable.

The $33,000 Delaware Special went to Blazing Bobby Sox and trainer/driver Art Stafford, Jr. in come-from-behind fashion. The five-year-old son of The Panderosa-Liamatters survived a first-over journey to win by a nose over even-money favourite Bad Boy Matt in 1:50.3. Remember Me VK was a lapped-on third in the hotly-contested tilt.

Art Stafford, Jr. owns the 14-time winner with Arthur Stafford of Harrington, DE, and together they’ve watched the speedster bank close to $130,000 in his career.