Power And Grace Beats The Boys 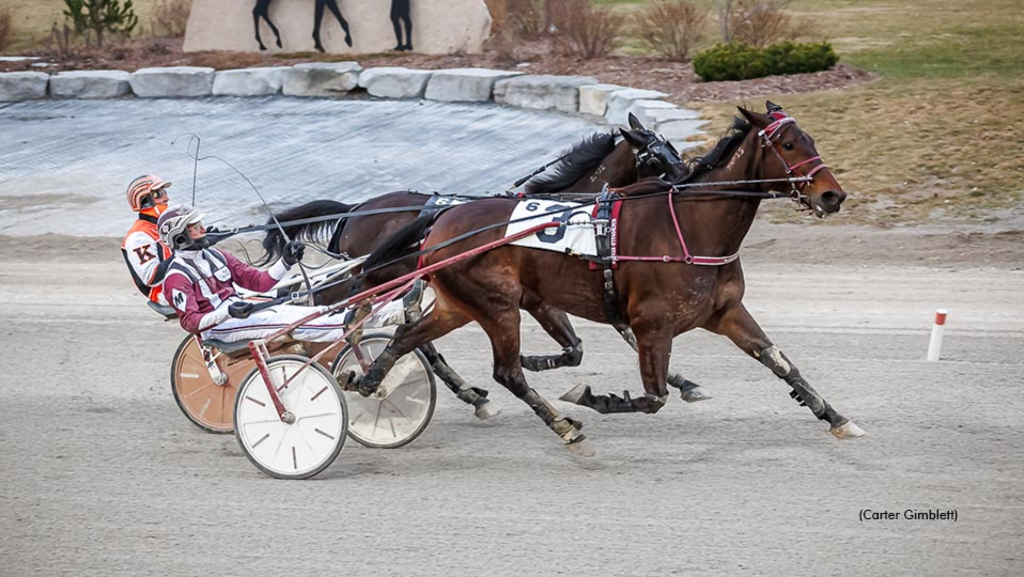 Power And Grace converted a pocket trip into her second consecutive victory at The Raceway at Western Fair District, beating the boys in Friday's top $13,000 Preferred 2 Handicap Trot.

Leaving from post three, Power And Grace and driver Brett MacDonald gave way to outside assignee Esquire (Tyler Borth) as that rival circled the field through a :28.3 opening quarter. The classy trotting mare from the Ron MacDonald stable followed the leader past the half in :59 while Willyorwonthe (Colin Kelly) challenged first-over and edged ahead down the backside approaching the three-quarters mark in 1:28.1. Power And Grace then moved out on the cover and chased after Willyorwonthe into the stretch, powering alongside and getting by for the half-length victory in 1:59 flat. Scene A Magician (Garrett Rooney) finished 3-1/2 lengths behind in third over Esquire.

After getting back to her winning ways in the Preferred 3 class last week, she defeated the top trotters tonight for her fourth victory of the season from nine starts. The seven-year-old Holiday Road-Mark Of Honour mare now has 37 career wins and $310,824 earned for owners Hartel Maintenance and Lormer McClure.

The 7-5 choice Katch Kanna (Travis Henry) led most of the way through fractions of :28.1, :59 and 1:29.3 before being confronted by Arrakis (Jason Ryan) turning for home and Goaltender (Samuel Fillion) in the three-wide path. However, it was Jayport Hi Class, who was seventh with just the early breaker beat at the midway mark, closing widest of all down the stretch to steal the glory. He paid $13.50 to win. Goaltender settled for second in the three-across finish with Arrakis third.

A five-year-old Muscle Mass gelding out of Jayport Forever, Jayport Hi Class notched his second Preferred 3 win of the year -- both times defeating Goaltender -- and now has just over $20,000 banked from 10 starts. The victory was his ninth lifetime and lifted his career earnings to $78,201 for owners Ted Melchers and Gys Versteegh.