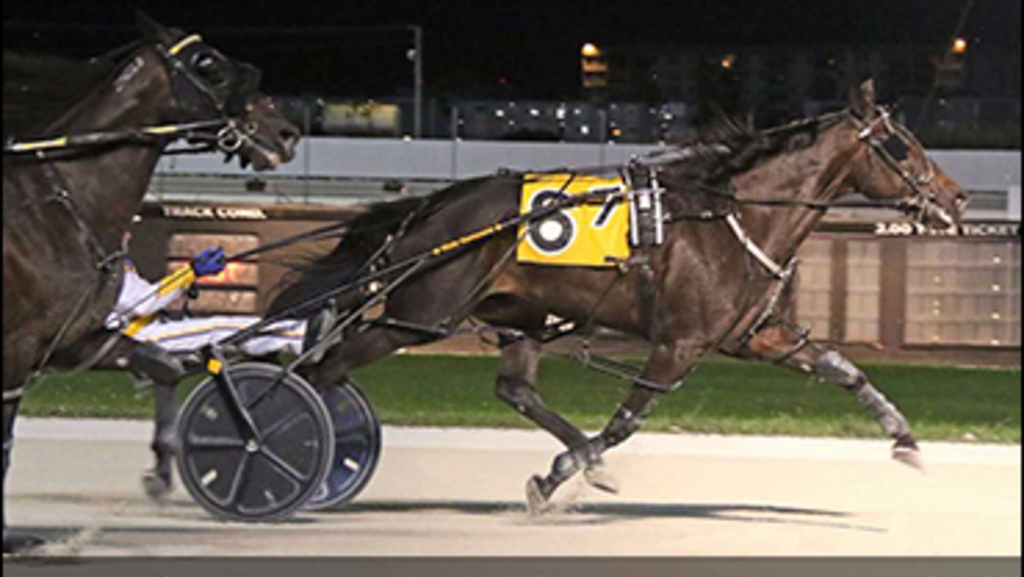 The versatile seven-year-old gelded son of Royel Millennium changed strategy this night after a courageous win last week on the engine, coming from well off the pace to score in 1:51.2 under the direction of Hall of Fame driver Wally Hennessey.

Seeing Eye Single (David Miller) closed fastest of all to be second, three-quarters of length away, while Skip To My Lou, assigned the outside post in this field, rallied from last halfway through the mile to finish third.

On the backside, things began to boil over with Ideal Feeling going first-up into the wind and Prairie Panther and Skip To My Lou both catching live cover.

After reaching the third platform in 1:22.2 and turning for home, Ideal Feeling stuck his head in front, but they were all fanned across the racetrack. Prairie Panther surged off cover into the lead, with his :28.3 finale getting him to the winner's circle for the 43rd time during his career measuring 102 starts.

In a post-race interview, Hennessey remarked, "What can I say...he shows up for work every week! It was pretty windy out there, and there seemed to be some speed inside materializing, so I kept out of that hoping the fractions would be quick for us to pounce on the backside. After that half (:53.2), I was lucky enough to catch some live cover, and the Panther did the rest. You have to give credit to the trainer, who keeps him razor sharp, and the dedicated caretakers who put in the hours to bring out the best in him.

Trainer Mike Deters added, "Panther raced great! He has a great set of lungs and, probably, his greatest attribute is he rarely gets tired. If he does have a flaw, it's that he doesn't have very good gate speed, and that's why I was so surprised that he won last week that way. Hats off to Wally for putting him in a position to win!"

Deters co-owns the winner, who now has banked $408,730, with breeder Laurie Poulin.

Though Prairie Panther was the 5-2 morning line favourite, he went off as the third choice at 7-2 and paid $9.40 to win.

The $10,000 Open II Pace went to Lets Roll and driver Mike Simons. The six-year-old son of Roll With Joe made a bold first-up move on the backside, stuck his head in front around the final bend, and went on to score a 2-1/2-length win in 1:51.3 for his third win of the season. Mach West (Wally Hennessey) was second; Windemere Ryan (Braxten Boyd) was third.

Owned by Rosie Huff along with Beauty Bridle Racing and Our Three Sons Stable, Lets Roll won for the 18th time in his career, sending his lifetime bounty to $170,060. As the fourth choice in the betting, Lets Roll paid $11.40 to win.