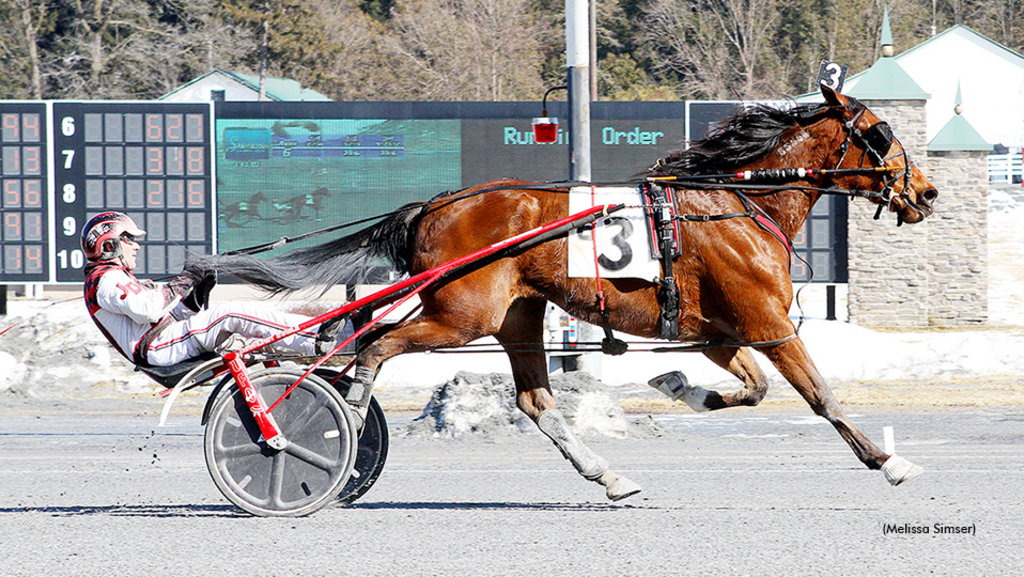 Dewey Arnold was a winning machine in 2021. Competing primarily in the New York Sire Stakes all spring and summer, the Dave Dewhurst trainee rattled off victory after victory before becoming an Open trotter late in the season. When racing in the local trotting feature at Saratoga Casino Hotel, Dewey Arnold enjoyed a strong stretch in the fall before being shut down in mid-October. All told, in his sophomore season, Dewey Arnold piled up over a quarter of a million dollars in earnings by way of 12 wins.

The ’22 campaign didn’t get off to as good of a start for 'Dewey' though and he didn’t have much to show for his first three starts back. On Sunday afternoon (March 6), the four-year-old son of Deweycheatumnhowe drew post three for his try in the $15,000 Open Trot. The track’s defending leading driver Jimmy Devaux asked Dewey Arnold for some early speed and things looked grim after the start as the talented trotter wound up being parked out.

Bridge Works (Luke Hanners) was on the front-end and felt mild pressure from Dewey Arnold, who took a ride on the rim in a first half that was clocked in :57.3. Squee Hanover (Billy Dobson) pulled behind the parked out rival before tipping three-wide around the final turn. Bridge Works began to tire though and Dewey Arnold just kept plugging away before taking the lead turning for home. Squee Hanover charged at him late in the game but the chase proved to be futile. Dewey Arnold registered his first victory of the season and did so in 1:56.2 to match the fastest trotting mile of the young season at the Spa. Squee Hanover finished second while Bridge Works held on for third.

Live racing continues on Monday afternoon at Saratoga with a noon start to the matinee.