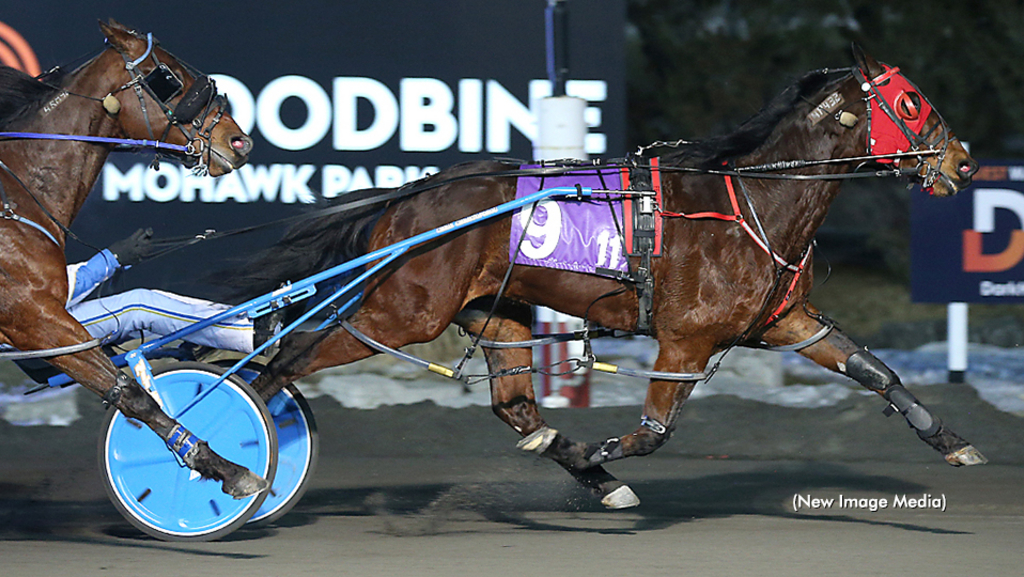 Odds-on favourite Reagan Blue Chip charged to the front and never looked back to take the $25,000 Pop-Up Series Final at Woodbine Mohawk Park on Saturday (March 5).

Driver Chris Christoforou settled the five-year-old American Ideal gelding in third to a :28.2 first quarter before sending him after pacesetter Farmers Tan in the backstretch. Reagan Blue Chip took over the lead to a :58 half as Private Scott crept uncovered towards the leader but stalled moving to three-quarters in 1:26.2. Reagan Blue Chip maintained his advantage on Private Scott off the turn and through the stretch, stopping the clock in 1:54.2 to register a length victory. Little Manny finished third and Farmers Tan took fourth.

Trained by Rob Fellows for owner Des Tackoor, Reagan Blue Chip won his second race from seven starts this season and his seventh from 28 overall, pushing his earnings to $107,163. He paid $3.30 to win.

Conditioner Carmen Auciello collected a win in one of the two $15,000 Pop-Up Series Consolations as part of a training hat trick on the card. In the first consolation, Air Strike circled to the lead after a :27.2 first quarter and cruised through middle fractions of :57 and 1:25.3 before strolling away from his competition to post a three-length victory in 1:53.1. Stolen Art finished second with Come On Barney another four lengths behind in third and Twin B Laker took fourth.

An eight-year-old gelding by Always A Virgin, Air Strike won his fourth race from 10 starts this season and his 28th from 133 overall, lifting his earnings to $420,427. Doug McNair drove the $2.90 winner for owner Daniel Sarafian. The gelding was the second of Auciello’s three winners, with the other two being Islandspecialmajor ($9.30) and Woodmere Stealdeal ($7.10).

Skylar sat a pocket trip to pull an 11-1 upset in the other $15,000 Pop-Up Series Consolation. The six-year-old Rockin Image gelding stalked pacesetter Snap Test through fractions of :27.4, :57 and 1:26 until driver Austin Sorrie began to tip off the pegs exiting the final turn. Skylar scooted by Snap Test in the stretch but only narrowly to win by three-quarters of a length at the end of a 1:54.4 mile. The Loan Ranger rallied for third and Artistic Pick finished fourth.