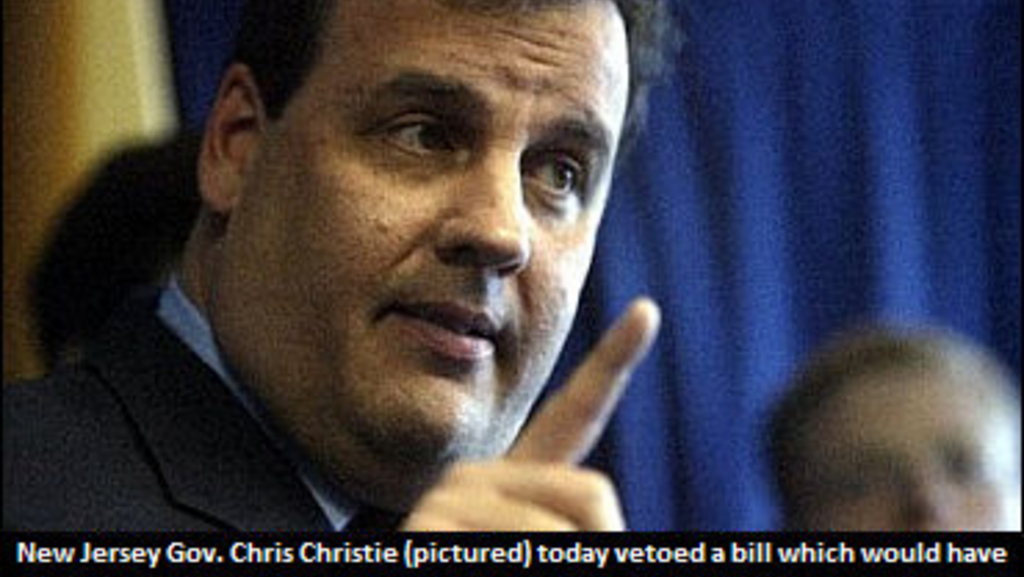 According to a report on nj.com, Gov. Christie said that his concerns with the bill were both "legal and constitutional."

The article quotes assemblyman John Burzichelli as saying, “The reality is that internet gaming is coming and we need to figure out a way to make it work to benefit Atlantic City casinos. I hope to work cooperatively on new legislation that ensures New Jersey remains competitive for years to come in all aspects of modern gaming.”

A report by The Wall Street Journal explains that Gov. Christie also objected to the fact that revenue from the bill would be funnelled to support the state’s horse racing industry.

According to The Wall Street Journal, Gov. Christie also rejected the theory that the bill would satisfy constitutional requirements by placing servers in Atlantic City. “In my view, the creation of a legal fiction deeming all wagers to have ‘originated’ in Atlantic City cannot overcome the clear and unambiguous language of the State Constitution,” he was quoted as saying.

In addition to Gov. Christie's comments in regard to Atlantic City-based servers, he also made reference to the State Legislature calling a referendum on the issue.

“If the Legislature believes that expanding gambling outside of Atlantic City is in the best interests of the State of New Jersey, it should place the question on the ballot for the voters to decide.”

(With files from nj.com and The Wall Street Journal)

Governor Christie is possibly the most stubborn and foolish governors of New Jersey ever. He is all about cutting spending and part of that is shutting down the racetracks in New Jersey, but he doesn't realize that a lot of the state's revenue actually comes from racing. By shutting the racetracks down and blocking online gaming and betting, he will not only cost the state precious money but also he will be getting rid of thousands of jobs. The newspapers I have read call him a "national phenomenon" but he is extremely far from it. This big issue with the racetracks makes him very unpopular with horsemen, and he isn't too popular with New Jersey residents, either.

It is funny how Christie promised to get behind everyone while running for governor, but now that he is in office he is all high and mighty, cutting spending where it needs to be increased, slashing jobs and attempting to close racetracks vital to the sport of horse racing. The veto of this bill is yet another setback in horse racing, and Christie seems to think this is funny business, but I have hope in the industry that somehow online betting will get to New Jersey.

What a big mistake by the

What a big mistake by the Gover of New Jersey to veto this bill.Both houses in NJ approved it! There is a hugh revenue stream from online wagering. The States are going broke as we speak!
Six other States are looking to pass an online gambling bill. Florida,Iowa and Calf are just a few. Once one of these States pass such a law we should start to see a domino effect!
Scott Matthews