Despite a double jump up in class, Tetrick handled the talented son of Mach Three confidently, allowing a trio of gate leavers to move ahead of him early before immediately moving back to the outside following a :26.4 opening quarter-mile. Clearing to the front just past the :54.3 halfway station, Gerries Sport sprinted to the three-quarters in a quick 1:21.4, then had enough left in the tank to cruise under the wire a length and a half better than Kiss Of Terror (Kyle Ater) and Franzo (Dan Noble). 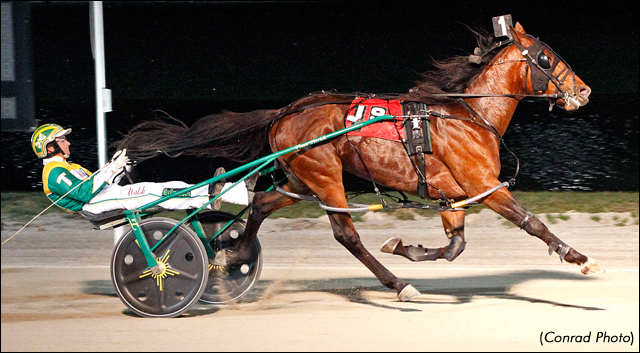 The win was just the 10th lifetime for Gerries Sport, from just 36 starts, but increased his career earnings to $304,988. He is owned by the partnership of Richard Lombardo, Carl Atley and Josh Green. Leading trainer Tyler George has conditioned the winner since he was sent from Ontario to Ohio in January.

Evergreen Elite (Trace Tetrick) and Heisenberg Z Tam (Tyler Smith) were winners in a pair of $12,500 divisions of the first leg of the Tom Tharps Memorial late-closing series for non-winners of six pari-mutuel races or $60,000 lifetime. Tharps is one of nine deceased “Lebanon Legends” who are honoured annually with memorial series in their names. In addition to being an accomplished horseman in his own right, Tom Tharps was the patriarch of the Tharps racing family, which includes his son Randy (the winningest African-American driver in history with over 6,000 victories), as well as a host of other sons and grandsons who followed in his footsteps.

Heisenberg Z Tam upset heavily favoured Hustling Charley in the second split, using a pocket trip to shove a neck in front in the final strides in 1:52. The four-year-old Rockin Image gelding returned $30.40 at the windows. He is owned by the Z Tam Stables, also of New York, and trained by Jim Arledge Jr.