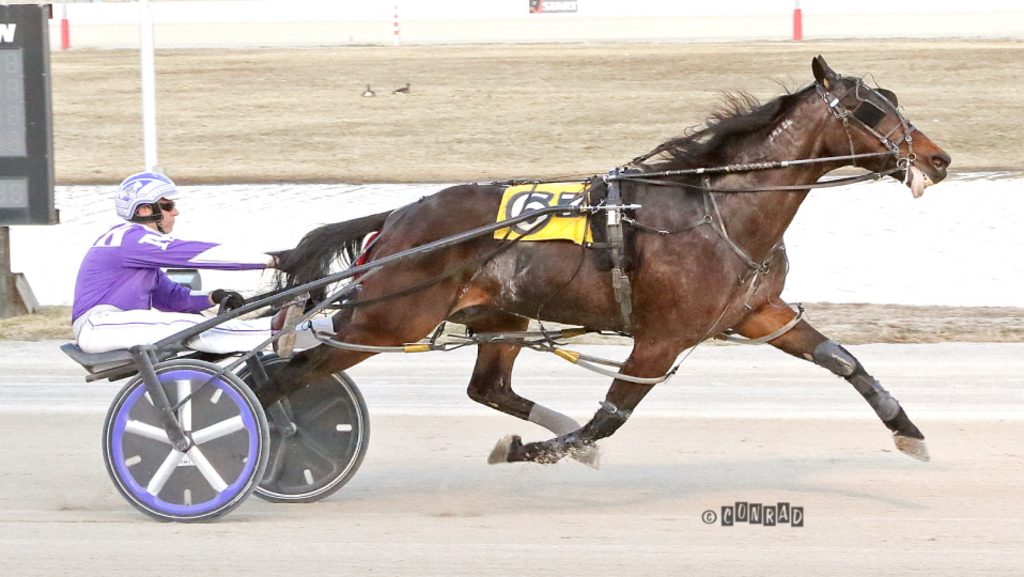 When driver Trace Tetrick crossed the line first with prohibitive favourite Annerie N in a conditioned race for mares early on the Thursday card, he became the first local reinsman to notch 100 victories in 2022.

Tetrick also was the first Miami Valley driver to eclipse the $1 million mark in seasonal purse earnings earlier in the week.

Another pair of top Ohio sulky sitters, Brett Miller and Dan Noble, is on the brink of surpassing the coveted $1 million mark as well. Another trio—Chris Page, Tyler Smith and Tony Hall—are likely to reach the same lofty plateau by season’s end on May 7.

There were a trio of Open Paces on the St. Patrick’s Day program. The $28,000 Open I was captured by Sectionline Bigry (Brett Miller) for his fourth win in eight 2022 starts in addition to a pair of place and show finishes. His 1:49.1 clocking was the quickest of the meet, beating last week’s winner Hezzz A Wise Sky (Sam Widger) and Blank Stare (Tony Hall). Miller placed Bigry fifth off the gate, moved into third in the outer flow at the three quarters, then paced confidently to an open lengths triumph through the stretch.

The $22,000 Open III went to General Dolan (Tetrick) in 1:50.4, despite coming off a three-week rest. The winner comes from leading trainer Tyler George’s barn. John and Robert Esposito own the seven-year-old Rockin Image gelding.

Miami Valley is dark Friday and Saturday, but will return to live racing Sunday through Thursday schedule on March 20 at 4:05 p.m.