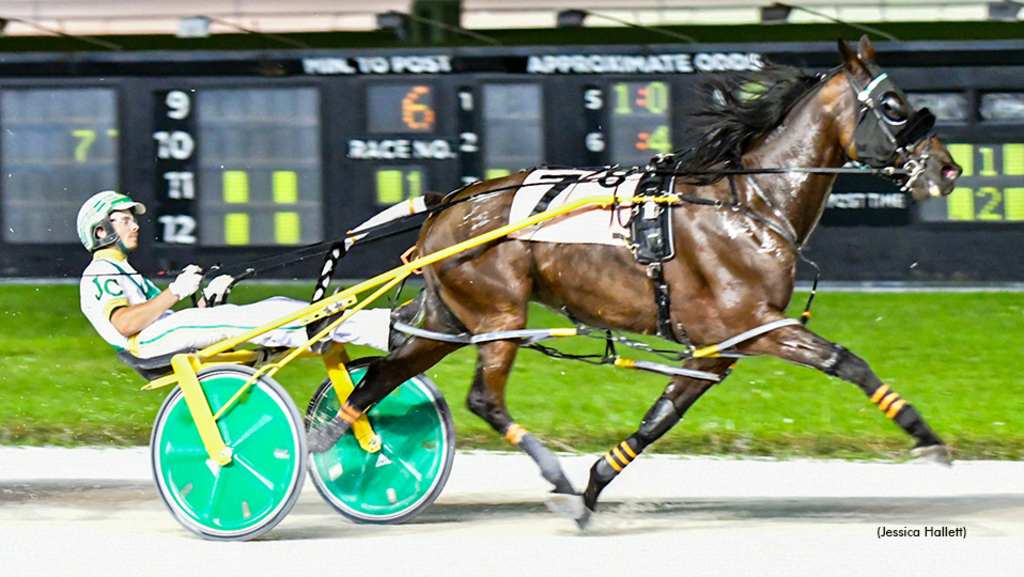 The brave seven-year-old daughter of Always A Virgin survived a week off when the event didn't fill a week ago, the outside seven post and a very hot opening quarter of :26.4 this night getting to the top to report home 1-1/2 lengths up on pocket-sitting Ourlittlemiracle (David Miller) with Vicious Circle (Rick Plano) third, another neck back. Sea Shadows finished fourth while Tuapeka Jessie N picked up the nickel in a very evenly matched and talented field of seven. The Stunning Nun N, making her USA debut was next but did pace her final three-quarters in 1:23.2 after being far back early.

Despite some known speedsters off the wings drawing inside of LA Always Amartini, Chindano's charge had her ears pinned up and ready to go as the wings folded and it took much of the hot opening panel to gain the top spot at that opening marker. From there, LA Always Amartini clocked panels of :55.4 and 1:23.4 before a :28 finale left the issue with no doubt, even after Vicious Circle tried a backside blitz to challenge around the final bend.

"She seemed a bit dull warming up but, when Angie (trainer Coleman) rapped her on the rump entering the track for the post parade and said 'go get 'em,' her attitude changed and she was all business," said Chindano after the race.

"Actually, a couple of things had me concerned," added Coleman. "One, was the week off when the event didn't fill last week. Two, was the fact that there were a few in there that can sprint pretty well off the gate and, three, that opening quarter. But she sure is a game mare and her performance made me very proud. She can be a bit ornery at times but she sure gets down to business on the racetrack."

In winning for the fifth time in nine starts this year, LA Always Amartini vaulted her 2022 earnings to $41,684 for Fox Racing and lifetime bankroll to $330,421.

As the 8-5 choice, LA Always Amartini paid $5.40 to her multitude of faithful.

The seven-year-old daughter of American Ideal went a brave first-over journey to score by three-parts of  length over Roll With Angel (John MacDonald) with Donegalartchokin N (Peter Wrenn) third. Favoured Powered By Mach was next after cutting the mustard through panels of :27.1, a rated :57 and 1:24.4 while Rigginswind picked up the minor award in the field scratched down to six.

Trained by Jack Rice for Vogel and Wags Nags and Team Rice Racing, Protect Blue Chip earned her second win of the year in nine starts -- 27th lifetime -- to send her career bounty to $242,591.

The winner paid $8.80 as third choice in the betting.